1 Burning Question: Can Wazzu repeat the success of 2015?

Was Mike Leach wearing out his welcome in Pullman and would he ever get over the hump? Those were the questions heading into the 2015 season. Leach provided some temporary answers when he took the Cougars to a 9-4 record in 2015 and went 6-3 in the conference. The 9-4 record represented the Cougars’ best season since 2003 when the team went 10-3.

2015 had to be the year for Leach, because he had been with the Cougars for an entire recruiting cycle. At that point, just about everybody on the roster had been recruited by Leach and his coaches to play in their system. Leach now enters his fifth season and the big question is if Wazzu can build on what they achieved last year.

Washington State has one of the most experienced teams in the Pac-12, so I would not expect a huge drop-off. The schedule could be worse, as the Cougars draw a pretty favorable Pac-12 South slate.

The success of the season will come down to the close games. Last year, Wazzu did a great job in closing out games. They finished 6-3 in games decided by less than ten points. Expect Leach and the Cougars to be in the thick of it in the Pac-12 this season.

15 — This is the number of turnovers Washington State had in its four losses. In contrast, the Cougars had just 10 turnovers in their nine wins. It doesn’t take a rocket scientist to tell you that not turning the ball over is a great advantage in the game of football. The numbers are skewed a bit by the 7 turnovers in the loss to rival Washington, but if Wazzu can stem the avalanche of turnovers, they will be in every game this season.

26 — This is the number of times that the Cougars converted on 4th down last season. You don’t want a ton of turnovers, but you do want to be aggressive. In 2015, only Baylor and Purdue went for it on fourth down more than Washington State, and only Baylor had more conversions (28). Leach and his offense were successful 66% of the time on fourth down, which helped sustain drives and keep the opponents’ defense on the field. Getting one more shot on offense worked last year for Washington State. You can bet they will be just as aggressive in 2016.

Saturday, Nov 10, at Boise State
Record in the Last 5 Meetings: 4-0
Last Year’s Result: Did not play. Washington State won the last meeting, defeating the Broncos 41-20 in 2001.

Why it matters: It’s important for Washington State to get off to a good start, and Boise State is a prime-time early season opponent. By going into Boise and knocking off the Broncos, the Cougs can tell the college football world that they are real and ready to be reckoned with in 2016.

Why it matters: There are a lot of factors at play here. This is the first conference game of 2016 for the Cougars, so they want to get off to a good start. In addition, it’s a contest against a team that was once (and may soon be again) the cream of the crop in the Pac-12. Before last season’s overtime victory, the Cougars had not beaten Oregon since 2006. After an eight-season drought, how much confidence would it give the Cougars if they won two straight over a program with the pedigree that the Ducks have?

Why it matters: In the world of college football, nothing matters more than an in-state rivalry. Lately, the Apple Cup has gone to Washington more than the Cougars. The Huskies have won six of the last seven, and last season they handed the Cougars their most embarrassing loss of the year. There is a lot to play for in this rivalry game and it’s one that the Cougars have circled on their calendar. 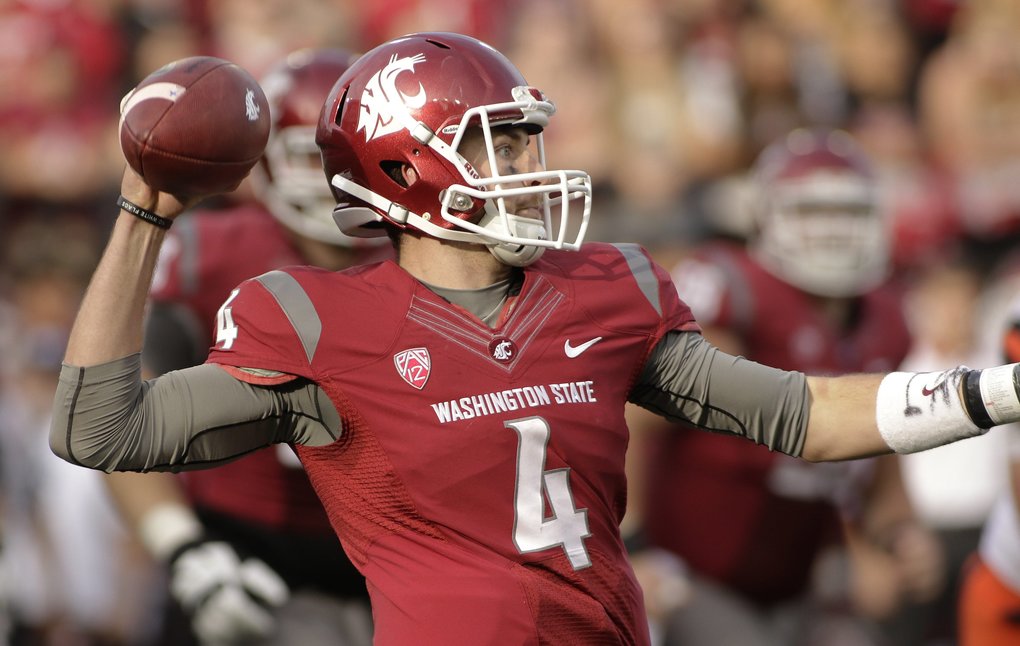 Luke Falk, QB – The exit of Connor Halliday made a lot of people nervous in Pullman. Luke Falk showed them they had nothing to worry about. He finished 2015 with a 69.4% completion percentage and a fantastic 38 TD/8 TD-to-INT ratio. Unfortunately, Falk missed the Apple Cup last season. You can bet he wants to be a part of this year’s game in a big way.

Gabe Marks, WR – Every great quarterback needs a go-to receiver. That’s where Marks comes in. In 2015, he led the Pac-12 with 104 receptions and 15 TDs. He was the leading receiver on a pass heavy team (738 pass attempts vs 294 rush attempts) and will be relied on heavily again in 2016.

Shalom Luani, FS – Luani led the Cougars last season in both interceptions (4) and solo tackles (67). The best defensive back on the team, Luani is a gifted athlete, and also plays soccer for American Samoa. He came to Wazzu last year via the JUCO ranks and had an immediate impact on the defense, starting all 13 games. He was a difference maker last season, and will have an active role in the secondary this fall.

Hercules Mata’afa, DE – We simply can’t keep a player named Hercules off our players to watch section. As a freshman, he saw action in every game in 2015, and like Luani, he made a significant impact. Hercules led the Cougars with 7 sacks and also had 11 tackles for loss. Expect big things from him again this season.

5. The Cougars will knock off Boise State.

Washington State cannot afford to look past Eastern Washington and lose a game like they did to Portland State last season. Once Eastern Washington is in the rear-view mirror, Boise State will be front and center. The Broncos are not the same team that they were under Chris Petersen. Under Petersen, they were a bully. Under Bryan Harsin, they are a good team but they don’t have the same pedigree. This is a game that Wazzu can win, and a game that I believe they will win.

Falk almost completed this in 2015, but he left in the second half of the Colorado game with an injury and didn’t play against rival Washington. If he can stay healthy throughout the entire year (which is a huge challenge for any quarterback), Falk will surpass the 5,000-yard mark.

3. The Cougars defense will move into the top four in total defense in the Pac-12.

In the first three seasons Mike Leach was at Wazzu, the defense hovered around 9th or 10th in the conference in total defense. Last season, it took a leap to 6th in the conference, allowing 416 yards per game. This season, the Cougars will continue to improve. Even though they must replace some key members of the defensive line, they will have one of the better defenses in the league.

In 2013, Brandin Cooks caught 128 passes for Oregon State. Last year, Gabe Marks caught 104, which was the sixth-best total in Pac-12 history. Look for Marks to break that record this year, as the Cougars offense will continue to improve.

1. Wazzu will win nine games for the second straight season.

I wonder what the ceiling is for this Washington State team. The Pac-12 is in a weird spot where the conference is filled with a lot of good to very good teams, but it doesn’t feel like there are any unbeatable teams. Wazzu should be in every game it plays this season. In fact, I could see Washington State finishing anywhere from 2nd to 5th in the Pac-12 North. I foresee them winning nine games again in 2016 with a possibility of stretching to 10. That would be a huge for Mike Leach and Washington State.