1 Burning Question: Are the Hokies a contender in the Coastal this season?

Make no mistake about it: Frank Beamer is a tough act to follow. He took over a struggling Hokie program back in 1987 and molded into a consistent winner. Sure, it took him six years to turn things around, but over the final 23 years of his career, Beamer guided Tech to 23 bowls, 13 10+ win seasons, 7 conference championships, and an appearance in the 1999 BCS Championship Game.

Unfortunately, the team hit a bit of a tailspin at the end of Beamer’s storied career, limping to a 29-23 mark over the final four seasons. Instead of competing for an ACC title every year — as the Hokies did in their first 10 seasons in the league — the team finished towards the middle of the pack.

Now that Justin Fuente takes over for Beamer, the question that all Hokie fans wanted answered is, “will Virginia Tech be a contender in the Coastal Division this fall”?

There are plenty of reasons to think so. The Hokies welcome back their top three targets from last season in Isaiah Ford (75 catches, 1,164 yards, 11 TDs), Cam Phillips (49 catches, 582 yards), and Bucky Hodges (40 catches, 530 yards, 6 TDs). Leading rusher Travon McMillan (1,042 yards rushing, 5.2 yards per carry) is also back, as is his lead blocker Sam Rogers (340 yards rushing, 193 yards receiving). They’ll run behind an experienced offensive line – led by three-year starter Jonathan McLaughlin – that has a combined 84 starts.

The Hokies are also in great shape on defense. Sure, Tech loses some big names like Kendall Fuller, Luther Maddy, Dadi Nicholas, and Deon Clarke, but they’ve still got a lot of experience coming back. Ken Ekanem (26 TFL, 15 sacks in his career) and Woody Baron (8 TFL, 3 sacks) return to anchor the defensive line after turning in solid seasons last year. At linebacker, the Hokies welcome back Andrew Motuapuaka — who led the team in TFL (11.5) and forced fumbles (3) — as well as Anthony Shegog (22.5 tackles) and Tremaine Edmunds (2.5 TFL), who both played well when given the opportunity last season. There’s also plenty of depth at secondary with Chuck Clark (107 tackles, 8 pub), Brandon Facyson (10 pbu), and Greg Stroman (2 INT, 5 pbu) returning.

33.51 – The percentage of third downs that opposing offenses converted against the Hokie defense last year. Although the Tech D only ranked 44th nationally in total defense, it had a knack for getting the job done in pressure situations, coming up with a stop on third down 66.49% of the time, which was the 19th best total in the country. The Hokie defense was especially effective in these situations against ranked opponents last year, holding Ohio State and North Carolina to just 7-of-24 on third down attempts. Virginia Tech will need for its defense to match these numbers again this fall if its going to win the Coastal Division.

3.8 – Tech’s average yards per carry last season, which ranked 105th nationally. Last year’s Hokie ground game hardly resembled the Beamer Ball-type rushing attacks of seasons past. Virginia Tech simply couldn’t run the ball in conference play, averaging just 3.01 yards per carry, with 59 of those attempts resulting in a loss of yardage. The Hokies need to establish a running game if they’re going to have a successful season. After all, Tech is 39-7 since 2009 when averaging over 4.0 yards per carry.

Why it Matters:  The Tar Heels won the Coastal Division last year and will be favored to do so again this fall. UNC returns seven starters on both sides of the ball from that championship squad, including Elijah Hood (1,463 yards rushing), top tackler Donnie Miles (128 tackles), and M.J. Stewart (4 INT, 18 passes defensed) — who all had a great game against the Hokies in 2015. The key to beating the ‘Heels this season will be to stop the run. Virginia Tech has held UNC to an average of 119.33 yards in its last three victories in the series, while giving up 289.5 yards and 6.29 yards in two defeats. A “W” in this contest would put the Hokies in the driver’s seat in the Coastal Division.

Why it Matters:  If — and it’s a big if — Tech beats North Carolina, it will need a victory in this game to win the division. Under Mark Richt’s leadership, the Hurricanes will be a force to be reckoned with in the Coastal. They’ve certainly had the upper hand in this series, winning three of the last four meetings by forcing turnovers. The Hokies were -10 in turnover margin in the three losses and +2 in the lone victory. However, it’s worth noting that Virginia Tech had its second-best rushing effort in conference play against UM last year, averaging 4.6 yards per carry. With most of the offensive line that made that possible returning this fall, the Hokies have to like their chances.

Why it Matters:  The battle for the Commonwealth Cup is one of college football’s best rivalries, dating all the way back to 1895. Virginia Tech has dominated the series recently, winning the last 12 meetings. However, the Cavaliers should be a much better team with Bronco Mendenhall calling the shots this year. If the Hokies are going to extend the streak to 13, they must find a way to stop the UVA ground game, which ran for 262 yards and a whopping 6.2 ypc last season. 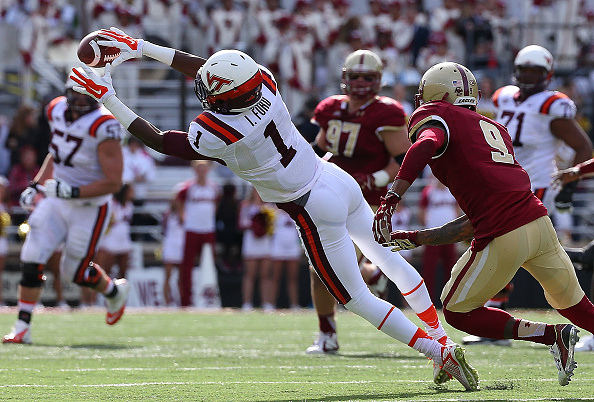 CHESTNUT HILL, MA – OCTOBER 31: Isaiah Ford #1 of the Virginia Tech Hokie makes a catch as John Johnson #9 of the Boston College Eagles defends in the first half at Alumni Stadium on October 31, 2015 in Chestnut Hill, Massachusetts. (Photo by Jim Rogash/Getty Images)

Isaiah Ford, WR – Ford was the best receiver in the ACC last year. He led the league in receiving yards (1,164), yards per game (89.5), and touchdown catches (11). While it’s tough to know exactly what Virginia Tech will do on offense this year since Coach Fuente tailors his scheme towards his personnel, it’s still safe to say that Ford will have a huge role again in 2016. How could he not after closing the 2015 campaign with three straight 100-yard games, highlighted by a 227-yard effort in the Independence Bowl?

Travon McMillan, RB – McMillan took over as the Hokies’ feature back towards the middle of the season, and didn’t disappoint. In Tech’s final eight games, he ran for an average of 102.38 yards per game and 4.88 yards per carry. He was also solid as a receiver out of the backfield last year, catching 12 passes for 64 yards. Look for the Hokie offense to lean on him again this season, especially in the early going as the quarterback situation sorts itself out.

Ken Ekanem, DE – With 26 career starts under his belt, Ekanem is the team’s most experienced defensive lineman, and will be the Hokies’ leader in the trenches. He was one of the most disruptive players in the league in 2014, finishing second in the ACC in sacks (10.5) and third in TFL (15.5). Although his numbers dropped a little bit last year, he still had a solid season, leading the team in sacks (4.5) and finishing third in TFL (8.5). He will improve on both of those numbers in 2016.

Andrew Motuapuaka, LB – Motuapuaka returns to anchor the run defense after turning in a strong year in 2015. He finished third on the team in tackles (73), second in sacks (4), first in tackles for a loss (11.5), and first in forced fumbles (3). He also broke up three passes, recorded one pick, and recovered one fumble — returning both the interception and fumble recovery for a touchdown. Expect him to have another big season in 2016.

This really isn’t that bold of a prediction. After all, the Hokies return four starters on the offensive line, as well as lead blocker Sam Rogers at fullback. However, the line will be noticeably better under the leadership of Vance Vice. Don’t be surprise if Tech’s average yards per carry will increases by more than half a yard this fall.

As noted earlier in the preview, Ekanem’s sack and TFL numbers dropped significantly in 2015. Yet, if you take a close look at his stats, you can’t help but notice that he finished the season strong, recording three sacks and 5.5 TFL in the last four games. He’ll build on the momentum that he established at the end of 2015, and turn it into an outstanding 2016 season.

3. Jerod Evans wins the job as the starting quarterback.

Yes, I realize that this battle will likely continue throughout fall camp. But, it’s tough to ignore the numbers that Evans put up at Trinity Valley Community College last year, where he completed 179 of 287 passes (62.3%) for 3,164 yards and an amazing 38/3 TD-to-INT ratio. His precision passing, combined with his running skills (414 yards, 5.37 ypc) would make him a perfect fit for whatever scheme(s) that Virginia Tech wants to run this year. Look for him to emerge as the starter, and to have a fine season.

Spare me the “you’re an ACC homer, Johnson” speech, and take note: the Hokies will beat the Volunteers this season. This Virginia Tech team is much better than it appears to be on paper, while Tennessee isn’t nearly as good as the preseason hype they’re getting says they are. Expect the Hokie defense — which was 11th in the nation in third down conversion defense in games versus ranked opponents (30.43) — to prevent the Volunteers from sustaining drives, which will result in a crucial non-conference victory.

Paced by solid quarterback play, an improved offensive line, and another well-coached Bud Foster defense, Virginia Tech will win at least nine games this year. With a victory in a bowl game or a “W” against Miami or North Carolina, the Hokies will reach double-digit wins for the first time since 2011. As a result of this success, Fuente will capture ACC Coach of Year honors.