1 Burning Question: Will Texas A&M Have a Big Season To Get Kevin Sumlin off the hot seat?

Sumlin’s career in College Station got off to a fantastic start. In his first season at A&M, he led the Aggies to an 11-2 record, which included a victory over eventual national champion Alabama…in Tuscaloosa. He followed that up with a respectable 9-4 showing in 2013, finishing 18th in the final AP poll.

The last two years have been a completely different story. Plagued by inconsistent play at quarterback and costly turnovers, the Aggies have limped to an 8-5 record in each of the last two seasons.

More importantly, Texas A&M hasn’t finished higher than fourth in the SEC West since Sumlin’s first season. Considering that he’s just 1-7 against Alabama and LSU – it’s safe to say that Sumlin needs to win big this season in order to keep his job.

There are plenty of reasons to think so. Even though Kyle Allen and Kyler Murray transferred out of the program, the Aggies have a veteran presence at quarterback in Trevor Knight, who torched Alabama for 348 yards and 4 TD’s in the 2014 Sugar Bowl. He’ll have a talented group of receivers to work with, including Christian Kirk (80 catches, 1,009 yards, 7 TD’s), Josh Reynolds (51 catches, 907 yards, 5 TD), Ricky Seals-Jones (45 catches, 560 yards, 4 TDs), and Speedy Noil (67 career catches, 809 yards). The running game will be solid, if not spectacular, with James White (196 yards) and Oklahoma transfer Keith Ford (526 yards in 2 seasons) expected to pick up where Tra Carson left off last season.

Defensively, the Aggies are poised for a big year in John Chavis’ second season as defensive coordinator. A&M’s defensive line will continue to make a lot of plays in opposing backfields, as Myles Garrett (19.5 TFL, 12 sacks), Daeshon Hall (14.5 TFL, 7 sacks), and Daylon Mack (9.5 TFL) are back to anchor a unit that led the SEC in tackles for a loss last season. There’s also plenty of experience at linebacker with Shaan Washington (81 tackles, 7.5 TFL) and 2014 starter Otaro Alaka returning. Most of the secondary is back as well, including Donovan Wilson (5 INT, 3 forced fumbles), Armani Watts (team-leading 126 tackles, 3 passes defensed, 2 forced fumbles), and Justin Evans (71 tackles, 1 INT, 3 pbu).

2.98 – This was Texas A&M’s average yards per carry in its five losses last year. While the Aggies have a fantastic passing game, the team won’t be successful unless it’s able to run the ball. A&M struggled on the ground against the better teams on its schedule last season, failing to crack the 3-yard barrier against Alabama, Ole Miss, and LSU. This number must improve this year, if the Aggies are going to compete in the West. Should Texas A&M find a ground game, it definitely has a chance to win the division. In fact, the team is 18-1 under Sumlin when running the ball 40 or more times in a game (lone loss was to Auburn in 2013).

32.99 – This was how often opponents converted on third down against the Texas A&M defense last year. Although the Aggie D did give up its share of yardage last season, it was one of the best units in the country on third down, ranking 15th nationally in third down conversion defense. A&M didn’t just pad these numbers against weak competition, as they were just as effective against ranked opponents (34%) as they were versus unranked foes (32.65). The Aggies definitely need for this trend to continue this season, especially in the early going when they face UCLA, Arkansas, and Tennessee, which all ranked in the Top 25 nationally in third down conversion percentage last year.

Why it Matters:  Even though it’s the conference opener, this game will help determine whether the Aggies are a contender or pretender in the West this season. Although Auburn went just 2-6 in conference play a year ago, one of those victories came against Texas A&M at Kyle Field. It’s crucial that the Aggies win this game to start off the conference season on the right foot. If they don’t, rumors about Sumlin’s status will begin to swirl, which could be a huge distraction for the team as it prepares for winnable games against Arkansas, South Carolina, and Tennessee.

Why it Matters:  Regardless of whether the Tigers enter this game as a top 10 opponent or whether they’re vastly overrated, this is still an important game for A&M. The Aggies have dropped five straight in the series (four as a member of the SEC plus the 2011 Cotton Bowl) and haven’t eclipsed the 300-yard barrier in the past three meetings. A victory in this contest virtually guarantees that Texas A&M will finish in the upper half of the division and would silence Sumlin’s critics who frequently point to his 1-7 mark against LSU as a reason why he must go.

Why it Matters:  Make no mistake about it: Alabama is the team to beat in the SEC West. Sure, they’ve got a few holes to fill, but the Crimson Tide doesn’t rebuild under Nick Saban, they reload. If Texas A&M is going to win the division, it has to find a way to stop the Alabama ground game, which has averaged 263.33 yards and 6.22 yards per carry in the last three meetings. Much like the LSU game, a victory against the Crimson Tide would quiet Sumlin’s critics for the time being, and earn him another season. 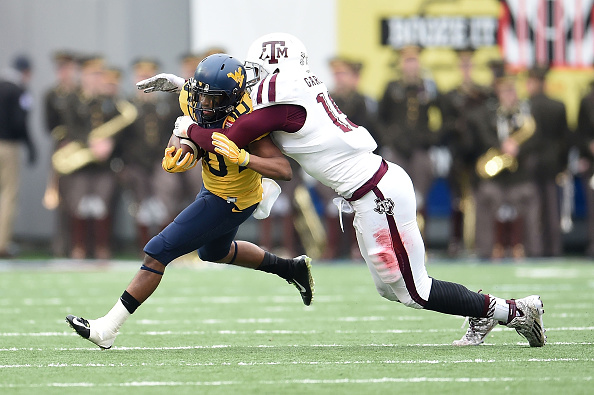 Myles Garrett, DE – Garrett followed up a strong 2014 season (11.5 sacks, 14 TFL) by becoming the most disruptive player in the SEC. A beast who repeatedly came up with big plays last year, Garrett led the league in sacks (12.5), tackles for a loss (19.5), and forced fumbles (5). He’ll be the leader of the A&M pass rush again this year, and will earn All-SEC honors for the third straight year.

Trevor Knight, QB – After starting at Oklahoma in 2013 and 2014, Knight gives the Aggies a much-needed veteran presence under center. His skills as both a runner (853 career rushing yards, 5.6 ypc) and a passer (57.1 completion percentage, 3,424 yards, 7.0 yards per attempt in his career) will cause all sorts of matchup problems for opposing defenses. Just ask Alabama, who he torched for 348 yards and 4 TDs in the 2014 Sugar Bowl.

Christian Kirk, WR – A freshman All-American last fall, Kirk was A&M’s best receiver, catching 80 passes for 1,009 yards and 7 TD’s. Although most of his receptions came on first and second down (51 of 80), Kirk was excellent when targeted on third down, with 13 of his 18 catches resulting in first downs. He’ll be Knight’s top target this year, and will eclipse the 1,000-yard barrier again this season.

Armani Watts, FS – Watts is one of the more versatile players in the league. He led the SEC in solo tackles (83) last season, and finished second in tackles with 126. Yet, he’s also excelled in pass defense at A&M, leading the team in interceptions (3) and passes broken up (8) in 2014. Look for him to have a very active role again in 2016.

5. Myles Garrett will win SEC Defensive Player of the Year

Even though he was the most disruptive player in the conference, and led the league in three different categories, Garrett did not win this distinguished award last year. However, he will improve his sack and TFL numbers for the third straight season, making him a virtual lock to win Defensive POY honors in 2016.

4. Trevor Knight has a big season.

Much like the previous choice, this prediction isn’t exactly bold. After all, Knight was the starter at Oklahoma for two years, and had a monster game against Alabama in the 2014 Sugar Bowl. Yet, despite these facts, some people expressed doubts about how productive he’ll be this fall. Knight will prove them all wrong by having the type of breakout season that everyone expected him to have in 2014.

3. The Aggie defense allows less than 5 yards per carry.

In Sumlin’s first season, Texas A&M allowed just 3.7 yards per carry. Since then, the Aggies have allowed more than 5 yards per carry every year and have given up over 200 yards in 24 of the last 39 games. That will change this season, as the A&M front seven becomes one of the better units in the league.

Just about every fact, figure, and statistic from the past few seasons would suggest that the Tigers will win this game. However, as noted in the previous bold prediction, the Aggie run defense will be much better this season, which means that it should be able to hold LSU to 19 points (or less) again in 2016. Knight and company should have no trouble scoring 3 TD’s against a Tiger secondary that allowed ranked opponents to complete over 60% of their passes last season.

1. Kevin Sumlin is back at Texas A&M next season.

Thanks to a high-powered offense and an improved defense, the Aggies will win at least nine games this season and finish in the upper half of the SEC West. Since one of those wins will be against LSU, Sumlin will remain as the head coach and quiet his critics… for now.