1 Burning Question: Can Northwestern sustain the success from last season?

A campaign ago, Northwestern finally proved its ability to contend in the Big Ten, winning 10 regular season games for the first time in 22 years. Now, the Wildcats must attempt to at least repeat their win total in 2016.

From 2011-15, Northwestern holds a mark of 36-27, calculating to a .571 winning percentage and ranking No.53 (tied with two other schools) among Division I programs in the aforementioned rate. However, in the conference, the team places eighth out of 14 universities over that span. Hence, under this regime, the Wildcats have exhibited an incapability to consistently defeat the likes of Ohio State, Michigan State, Nebraska, Michigan, and Iowa.

While recent history argues against the group’s chances to secure back-to-back 10-win campaign, Northwestern’s stars would say otherwise. In 2016, the Wildcats bring back 12 starters, seven on offense and five on defense.

Offensively, running back Justin Jackson carries the load, compiling 1,418 yards on the ground, as well as hauling in 162 yards through the air in 2015. Other weapons include wide receivers Austin Carr (302 yards, two touchdowns, 18.88 yards per catch) and Mike McHugh (160 yards). Although their numbers were low, following the loss of Dan Vitale, Christian Jones, and Mike Schuler, who combined for 738 yards and six touchdowns last season, the two possess an opportunity to pick up the slack.

On the opposite side of the ball, All-American linebacker Anthony Walker led the Wildcats in tackles (122) and was aided by cornerback Matthew Harris, who corralled four interceptions. Junior safety Goodwin Igwebuike also played an important role, finishing second in tackles (87) and manufacturing havoc around the line of scrimmage as a run stopper. Yet, since defensive end Deonte Gibson recently graduated (nine sacks), Long should begin his search for the next-great pass rusher in Evanston, selecting from a unit that collected 31 sacks, good for 40th in the nation.

19.5 — The amount of points Northwestern scored per game (No. 114 in Division I). In spite of the fact that the Wildcats retain an all-around tailback in Jackson, their defense undoubtedly carried the club in ’15. Moreover, Northwestern’s passing attack averaged a lowly 138.5 passing yards per contest (No. 120 in Division I), and receivers picked up a head-scratching 10.4 yards per catch (No. 122 in Division I). Sophomore quarterback Clayton Thorson needs to discover a way to pickup chunks downfield, and his receivers have to improve at creating separation, too.

.325 — Northwestern’s 3rd down conversion percentage defense a season ago (No. 15 in Division I). Hankwitz’s personnel stymied opposing offenses at an extremely crucial time, allowing just 69 conversions in 212 attempts. Additionally, the defense broke up 61 passes in ’15 (No. 12 in Division I), led by Harris’ team-high 18 (No. 18 in Division I). Thus, they displayed a willingness to hold up in the secondary on the critical down.

On top of that, the Wildcats boasted the No. 13 overall defense, giving up merely 318.9 yards per contest. Even though their core lost pieces, like defensive end Dean Lowry (52 tackles, three sacks) and cornerback Nick VanHoose, (12 pass-breakups, three interceptions), adversaries will continue to fear them.

Why it Matters: In the last five matchups between the two schools, Iowa has throttled Northwestern by a combined score of 163-83. Unfortunately for the Wildcats, the Hawkeyes expect to remain a contender in ’16, but three playmakers (running back Jordan Canzeri, receiver Tevaun Smith and tight end Henry Krieger Coble), from a campaign ago donned the cap and gown in May. For “Chicago’s Big Ten Team” to pickup the upset, slowing down head coach Kirk Ferentz’s rushing attack, which ran for 294 yards and five touchdowns in their last meeting, should be at the top of its to-do list. This game marks the first of three pivotal ones for the Wildcats, and their first win at Kinnick Stadium since 2012 would assist their hopes of finishing at the top of the Big Ten West division.

Why it Matters: Despite facing the mighty Ohio State Buckeyes two weeks later, Northwestern can actually compete with Michigan State (sorry, Evanston residents). Sans a proven quarterback, tailbacks L.J. Scott and Gerald Holmes will pound the rock ad nauseam. The duo provided 1,239 yards and 19 touchdowns a season ago, meaning the Wildcats must stack the box, forcing either fifth-year senior quarterback Tyler O’Connor or fourth-year junior Damion Terry to take on their unkind pass rush. A victory for Fitzgerald’s bunch at Spartan Stadium could emerge as the signature win of its campaign.

Why it Matters: Following two straight wins over Wisconsin, Northwestern needs to flex its muscles again. Expected to start the campaign as the fourth-best squad in the Big Ten, the Badgers own a couple of question marks on offense. Senior quarterback Bart Houston grabs the reigns from alum Joel Stave but has only attempted 51 passes in his three-year career. He lacks their No. 1 weapon from last season, too. Ex-wideout Alex Erikson recorded a team-high in both catches (77) and receiving yards (978).

Assuming that Houston wishes to rely on his running backs in this one, he might want to close his eyes. In 2015, the Wildcats held head coach Paul Chryst’s crew to minus-26 yards rushing. Fans shouldn’t forecast similar results, but another win against the Badgers would give the Wildcats major credibility within the conference, as Wisconsin has reached a bowl game in 14-straight campaigns, the longest streak in the Big Ten. 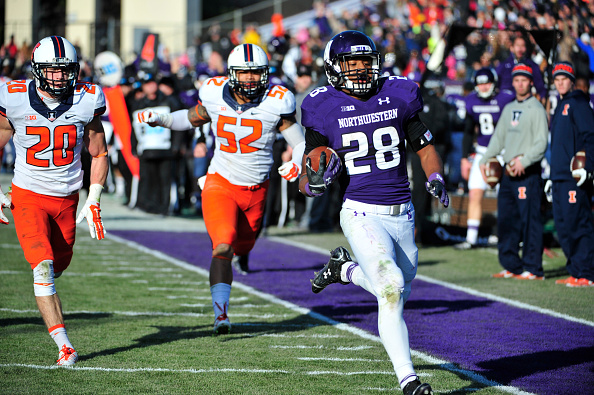 Justin Jackson, RB — The junior represents a coach’s dream at tailback, accumulating 37 percent of Northwestern’s total yardage (1,580 all-purpose yards) a campaign ago. Furthermore, his often-injured offensive line ranked No. 87 in Football Outsiders adjusted line yards, but that didn’t halt Jackson from rushing for over 100 yards in eight games, as well as ranking No. 21 in the nation in rushing yards per contest (109.1). Considering Ezekiel Elliot and Jordan Howard departed for the NFL, the 5-foot-11, 190-pound workhorse is officially the premier running back in the Big Ten.

Anthony Walker Jr., LB — Seemingly, no offensive line could freeze the 6-foot-1, 235-pound beast in 2015. The First Team All-Big Ten linebacker amassed 20.5 tackles for a loss, the third-most in a single-season at Northwestern. He even tallied a season-high 19 tackles against Duke. Fitzgerald can plug him in at middle or outsider linebacker, and either way, Walker preforms as a tremendous run-stopper or pass rusher (four sacks in ’15). When opponents prepare for Northwestern this campaign, Walker’s name will continuously be one of the first circled.

Clayton Thorson, QB — Thorson stepped in as a freshman and struggled, throwing for 1,522 yards and seven touchdowns, along with nine interceptions. Nonetheless, the offensive line failed to stay healthy, going through eight different combinations over 13 games. On a bright side, the dual-threat quarterback gathered 397 yards and five scores with his legs.

Plus, once the 6-foot-4, 220-pound Thorson suffered a lower-body injury versus Penn State, McCall ran a more conservative-style of offense against Penn State and Wisconsin, leading to only 142 passing yards from the signal caller during those two contests. Still, considering those issues, his six wins in a difficult conference is impressive. As a sophomore, he should garner further control of the offense.

Soloman Vault, WR/KR — Vault served as a do-it-all threat last season, dashing for 159 yards on the ground, grabbing 11 catches for 95 yards and averaging 26 yards per kickoff return, including two for scores in single-digit wins versus both Duke and Penn State. In the upcoming campaign, seeing the lack of talent, presume Vault will be thrusted into more of a receiving role. The 5-foot-10, 190-pound elusive speedster could establish himself as a vital threat for the Wildcats.

5. Clayton Thorson finishes with a top-seven quarterback rating in the Big Ten.

Last season, Thorson placed dead last (No. 14) in quarterback rating (95.9) within the conference among qualified participants. After obtaining experience, though, Thorson should lower his turnovers and progress into an improved pocket passer. Plus, one can expect his offensive line to stay healthier than a season ago, giving him a few extra ticks to read through his progressions, along with his inexperienced receiving core supplementary moments to find open space.

Their previous matchup at Spartan Stadium (2012) went Northwestern’s way. Assume a similar result four years later. Michigan State allowed the fifth-most sacks in the Big Ten last season (21), and following the exit of three of their five starters on the line, including All-American Jack Conklin, Northwestern’s pass rush should generate plenty of heat on either unseasoned signal caller.

3. Justin Jackson ranks top-5 in rushing yards in the country.

In 2015, Jackson finished 273 yards away from the fifth-most rushing yards among FBS tailbacks (Dalvin Cook, 1,691 yards). If the aforementioned offensive line’s starters stick in the lineup, Jackson could leap towards and possibly beyond that number. Nonetheless, he’ll have to hit the acceleration pedal quicker and display additional explosiveness, which is clearly obtainable with his skillset. A mended-passing attack should also keep opposing defenses from settling into an eight-man front, giving him plenty of room to burst through.

Of the five finalists a campaign ago (Leonard Floyd, Deion Jones, Raekwon McMillan, Reggie Ragland and Jaylon Smith), none totaled more tackles than Walker. The linebacker finished the season with five games of double-digit tackles, and versus Purdue, the Miami, Fla. native was uncontrollable, slamming down the opponent ten times on his own. While college football junkies might be stunned to see a Northwestern player on this list, Walker will claw his for the prestigious award.

Behind a bone-chilling running back and a defense that causes an abundance of bedlam, the Wildcats will enjoy consecutive 10-win campaigns for the first time in program history. If this feat happens, a lifetime extension would probably be on Fitzgerald’s desk the next morning, too.