1 Burning Question: Will the Mountaineer offense do enough for Dana Holgorsen to keep his job?

Last season should have served as a stepping stone for the West Virginia program. Eight wins is the most that the school has had since joining the Big 12 conference before the 2012 season. The Mountaineers dominated non-conference play and headed into their conference slate with a 3-0 record — giving up a combined 23 points to Georgia Southern, Liberty, and Maryland.

Then — in what has become commonplace in the Dana Holgorsen era — the team endured a losing streak that completely took it out of the running for a conference title. The Mountaineers were eliminated from title contention after four straight weeks of getting beat up in 2015. Even winning five of their last six games couldn’t erase the memory of losing to Oklahoma, Oklahoma State, Baylor, and TCU by a combined score of 179-98.

It’s consistent stretches of losing that has Holgorsen on the hot seat heading into 2016. Despite compiling a 36-28 record in his five seasons at West Virginia, the former Oklahoma State offensive coordinator is just 15-21 in Big 12 play.

There’s also a nasty habit of allowing his teams to fall off the wagon for weeks at a time.

During his first season in 2012 — after beating top-25 ranked Baylor and Texas to open up conference play — his squad lost five straight to Texas Tech, Kansas State, TCU, Oklahoma State, and Oklahoma.

2013 was the only time the Mountaineers have finished under .500 since joining the Big 12. In doing so, they had two separate three-game losing streaks in conference play. The following year, things looked promising for a team that was 4-1 in league play to start the season — with wins over Baylor and Oklahoma State. Unfortunately, West Virginia would follow that up with three straight losses to TCU, Texas, and Iowa State by a combined total of 24 points.

Overall, the West Virginia head man has had five losing streaks of three or more games in conference play. The story for the Mountaineers during this era has been an inability to answer after conference losses.

During his tenure, Holgorsen is 7-13 in games after conference losses. One of those wins came in non-conference play against Georgia Southern in 2015. Another came against Arizona State in last year’s Cactus Bowl — nearly a month after losing to Kansas State to wrap up the regular season at 4-5 in the conference.

The only conference wins that the head coach has recorded after a conference loss came against Iowa State in 2012 and 14, Kansas after a bye week and loss to Oklahoma in the same season, TCU in overtime in 2013, and finally Texas Tech in 2015.

So, even if the West Virginia offense can muster enough points to overshadow a very inexperienced defense that returns just three starters, it’s hard to argue that the program has a coaching staff in place that can put a team in position to answer to adversity.

It’s going to take the Mountaineer program rewriting history. The eight returning starters on offense will have to find a way to overcome their nine losses in conference play over the last two seasons, seven of which were decided by seven or more points.

158.7 – The number of rushing yards per game that the West Virginia defense gave up last season. It was the best game-to-game total in the Big 12 conference last year. In total, it only ranked 51 out of the 128 FBS schools who competed in 2015. The Mountaineer defense returns just three starters in their 3-3-5 defense. Holgorsen said earlier this spring that the defense looks the same to him, as it has in years past. That’s not necessarily a positive for a secondary that gave up 238 yards per game in the air last season — which ranked 83rd in the country. That total was with Karl Joseph starting the first four games of the season at safety. Joseph was selected 14th overall  by the Oakland Raiders in the 2016 NFL Draft.

25 – The number of rushing touchdowns that West Virginia scored last year, the sixth-best total in the Big 12. Those numbers have to be better in 2016, considering the Mountaineers finished second in rushing yards per game in the Big 12 conference and 16th nationally. If the Mountaineer offense plans to have success through its running game — it has to do better punching it in on the ground and advancing drives by moving the chains. West Virginia converted less than 37 percent of its third down conversion attempts in conference play last season, which ranked 79th in the country and eighth in the Big 12.

Why it Matters: West Virginia needs to start strong in league play. Since joining the Big 12, the Mountaineers are just 1-3 in conference openers. Kansas State has had the upper hand in the series since WVU joined the Big 12, but the past two meetings have been decided by a total of seven points. In order to set the tone for the rest of the conference slate, the Mountaineers must avenge their one-point loss from a year ago. In that game, West Virginia led 23-17 early in the fourth quarter, but only gained one first down on its final four possessions, which included some questionable decision making by Dana Holgorsen late in the game.

Why it Matters: If the Mountaineers ever want to contend in the Big 12 conference, they have to find a way to defeat Oklahoma. Last year’s team was down three with under a minute to go in the third quarter before giving up 17 straight points in the loss. Quarterback Skyler Howard has a lot to prove too, after tossing a season-high three interceptions at Memorial Stadium last season. However, this year’s game will be played in Morgantown, which could mean the difference between winning and losing. Remember, Howard was a completely different quarterback at home last year, completing 61.1% of his passes and averaging 8.8 yards per attempt.

Why it Matters: The final game of the season has proven to be important throughout the Big 12 conference the last few seasons. With Baylor potentially down in 2016, this is a must-win game for a team that is 13-5 in home finales since 1998. The Mountaineers went 3-1 at home last season in conference games and have something to prove defensively against a team that has scored at will on their defense. According to Phil Steele’s preview magazine, Baylor has scored on 55 percent of their drives against West Virginia in their last four meetings. 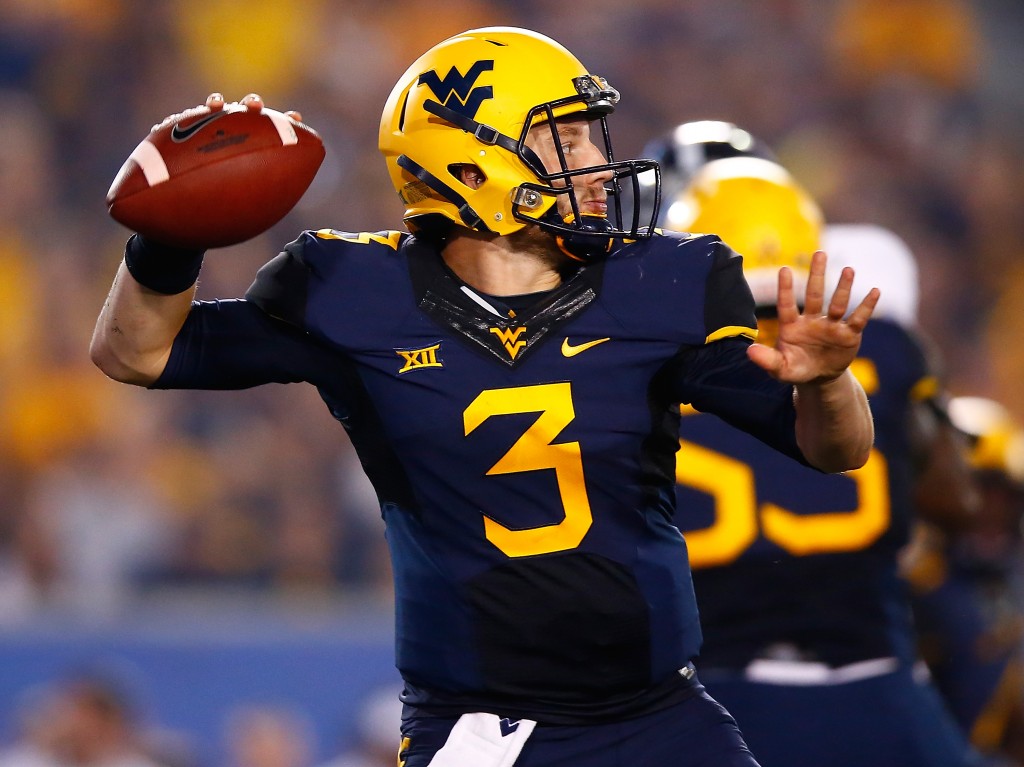 Skyler Howard, QB – Offensive coordinator Joe Wickline has a lot to work with in Howard, but there still is plenty of improvement that can be made in his decision-making and timing throughout the offense. When things were going well for Howard last year, the offense was hard to beat. In wins, he averaged over nine yards per pass attempt. In losses, he averaged a little more than five yards per pass attempt — which only begins to tell the story of how bad West Virginia’s passing offense was when Howard was out of sync. With the talent at wide receiver and four returning lineman, there is no excuse for completing just 55% of his passes in 2016.

Noble Nwachukwu, DE – Head coach Dana Holgorsen believes that his defensive line in 2016 will be the stronger than it has been since he’s been the Mountaineer head coach. That starts with Nwachukwu, who finished with 8.5 sacks last year, which was fourth-best in the conference. His role is very important for a defense that finished eighth in the Big 12 in sacks. The senior also garnered six QB hurries in 2015, while all other returning lineman combined for just one all of last season

Shelton Gibson/Daikiel Shorts/Jovon Durante, WR – What makes these players so great is their individual strengths when combining to form a unit. Shorts is a reception machine that can be depended on in play action. Gibson is a home-run hitter that averaged 24 yards per catch last season and scored five of his team-high nine touchdowns from the opposing 40-yard line or deeper.  Durante started for the Mountaineers last season and created havoc on first down for opposing defenses. 15 of his 25 receptions came on first down, and he averaged 17.6 yards per catch. Four of Durante’s five touchdowns came on first and 10. Beyond that, 18 of his 25 receptions allowed the West Virginia offense to move the chains.

Dravon Askew-Henry, FS – His stat totals don’t jump out on paper like former safety running mate Karl Joseph, but Askrew-Henry has been a force since starting for the Mountaineers as a freshman. Good luck running on his side of the field in option plays. He is one of the best run game stuffers and hardest hitters in the country at the free safety position.

5. Skylar Howard will pass for 300 yards or more in five games.

That is quite a bold prediction for a second-year starter who has never thrown for over 300 yards against a Big 12 foe. The only two times he eclipsed the 300-yard mark was against Georgia Southern last year and versus Texas A&M in the 2014 Liberty Bowl.

At points last season, Howard looked lost trying to move the football down the field. Not only was he confused at the line of scrimmage, but his passes were often overthrown or even undercut receivers from turning up field.

The proof is in the pudding for second-year quarterbacks in the Holgorsen offense, where signal callers typically show considerable improvement.

With just one returning starter in the eight-man back end of the West Virginia defense — Noble Nwachukwu will get every opportunity he could ask for to get to the quarterback. With less blitzing from younger players in the 3-3-5 stack defense — expect Noble to turn some of his QB hurries and 13.5 tackles for loss into devastating, momentum ending quarterback takedowns. Nwachukwu has the third most returning sacks in the Big 12 this season.

The Wildcats return just three starters on offense and will be ushering in four new starters on the offensive line. In addition, they’ll have two quarterbacks battling for the starting job, who will both be recovering from season-ending injuries.

Of course, last year K-State managed to defeat the Mountaineers with wide receiver Kody Cook filling in at quarterback.

Okay, maybe this prediction is a bit bolder than first anticipated.

Yet, the Wildcats ranked 121st in pass defense a year ago and could be even worse in 2016. That makes a very strong case for Skylar Howard and company to escape their opening conference game with a win at home.

When you average over 24 yards per catch and score at a rate like Gibson, award committees will recognize you.

The junior has game-changing speed on the edge and in the open field. That is evident when watching him play.

Yet, he still struggles with catching the football at times, especially on scoring plays. Look for that to be shored up in 2016 and for Gibson to score more than nine touchdowns this season.

1. West Virginia will not retain Dana Holgorsen in 2017.

After taking over for Oliver Luck last season, new athletic director Shane Lyons made it clear through the media that he wasn’t thrilled with his head coach’s leadership after losing to Kansas State last season.

Combine that with the break down of contract talks in February and it becomes clear that Holgorsen is coaching for his future in 2016.

Unfortunately, an eight-win season or bowl game appearance might not be enough, especially considering the current coaching staff only has two assistants that are under contract for 2017 and that Holgorsen is due just $2.9 million during his final contract year.