1 Burning Question: What will Baylor’s Team Look Like Under Jim Grobe?

After the dismissal of Art Briles, the biggest question for Baylor fans was, “what can we expect from the Bears under Jim Grobe?”

Make no mistake about it: Grobe is a home-run hire for Baylor. He’s an excellent football coach, with a reputation for winning despite having lesser talented players. In addition, he’s also a man of outstanding character, so much so that the coaches named him to the ethics committee.

With that said, no one knows exactly what his hire means for the team. On offense, will he use the ground-based attacks that he ran at Ohio and Wake Forest, or will he let Kendall Briles run the offense that has made the team so successful over the last five years? Similarly, will he manage the defense or will he let Phil Bennett run the show?

On the other side of the ball, the Bears welcome back several of their top performers as well. While the line loses a number of players this fall, Baylor has a disruptive force on the line in K.J. Smith, who recorded 9.5 TFL, 5 sacks, and 2 forced fumbles last year. The linebacking corps is also in great shape with Taylor Young (91 tackles, 8 TFL) and Aiavion Edwards (61 tackles) returning. First team All-Big 12 cornerback Xavien Howard (5 INT) and Travon Blanchard (84 tackles, 2 INT, 6 passes broken up) will be the top playmakers in an active Bear secondary that finished fourth in the Big 12 in passing defense last season.

2 Stats to Pay Attention to

5.95 – This was Baylor’s average yards per carry last season. While better known for their explosive passing attack, the Bears were one of the best running teams in the country, ranking fourth nationally in yards per carry. Whether Grobe chooses to leave the offense as it is, install a run-based offense, or do something between the two extremes, he’ll need for the success in the ground game to continue.

9 – The number of net turnovers Baylor lost in three defeats last season. Baylor was its own worst enemy in its three losses last year, turning the ball over 12 times. Although the Bears were able to win two contests when it lost the turnover battle last year – including a 45-35 victory over Oklahoma State when it went -2 in turnover margin – they must do a better job of protecting the football this season if they’re going to compete for the Big 12 championship.

Why it Matters:  This game will be the first real test for the Bears this season. If Baylor is going to compete for the conference championship in 2016, it must beat the Cowboys, which finished second in the league with a 7-2 conference record last year. A victory in this contest would put the Bears in the driver’s seat in the conference race, making it extremely likely that they’ll be 8-0 when they visit Texas on October 29.

Why it Matters:  While it isn’t Baylor’s oldest rivalry game, it’s quickly becoming the most heated one. In last year’s meeting, the Bears still had an outside shot at an NY6 Bowl Game before the Longhorns raced out to a 20-point lead en route to a mild upset. This season’s contest will have a little additional spice after several members of the Bears’ 2016 recruiting class signed with Texas after receiving their releases from Baylor. Whether they’ll admit it publicly or not, Baylor players will definitely want to send a message in this game.

Why it Matters:  Dating back to 1899, “The Revivalry” is one of the oldest rivalries in all of college football. Regardless of whether these teams are playing for a conference championship (like they were in 2014) or simply trying to qualify for a higher profile bowl game, this is always one of the 10 best contests of the season. It certainly has been over the past five years, as four of the last five meetings have been decided by a TD or less — with three of them decided by a field goal or less. 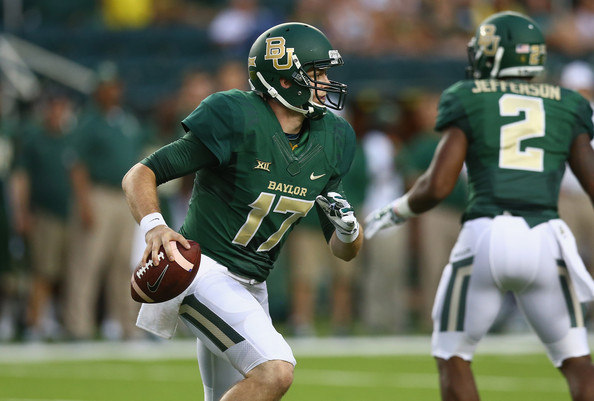 Seth Russell, QB – The unquestioned leader of the team, Russell was playing as well as any quarterback in the nation last year before suffering a season-ending neck injury against Iowa State. He completed 119 of 200 passes for 2,104 yards with 29 touchdowns and only six interceptions. He’s also a more-than-capable runner, rushing for 409 yards on 42 carries (8.2 ypc) and six touchdowns. Regardless of what system Jim Grobe uses this season, Russell will have a huge role.

Shock Linwood, RB – After finishing second on the team during his freshman season, Linwood has led the Bears in rushing in each of the past two seasons. He’s been at his best against elite competition throughout his career, rushing for 777 yards and 5.07 yards per carry against ranked opponents. Expect him to average at least 100 yards per game for the second straight season, especially if Grobe has an active role in the play calling.

Taylor Young, LB – He wasn’t one of the most recognizable names on the Baylor defense last year, but Young had a fine season. A force against the run, he finished third on the team in tackles (80) and fourth in tackles for a loss (13.5). He also recorded 4 sacks and broke up a pass. The Bear defense will need another big season out of him this fall, especially in the early part of the year, as the defensive line breaks in some new starters.

Xavien Howard, CB – Howard will be the leader of a very talented secondary. He was Baylor’s top cover man last fall, intercepting 5 passes and breaking up 10 more. He’ll team up with Ryan Reid (3 INT, 8 passes broken up), Travon Blanchard (2 INT, 6 pbu, 4 forced fumbles), Orion Stewart (1 INT, 3 pbu), and Chance Waz (3 pbu) to form one of the best secondaries in the Big 12.

The Bears lose a ton of talent from last year’s squad, including All-Big 12 tackle Spencer Drango and second team All-Big 12 guard Jarell Broxton. However, second-team All-Big 12 center Kyle Fuller (26 career starts) is back and will give the Bears a much-needed veteran presence at the most important position on the offensive line. While losing so many key players would decimate most teams, Grobe has made a career out of getting the most out of his players. Considering that Baylor has a lot more talent — albeit inexperienced — than his teams at Wake ever did, there’s no reason to expect a drop off in production this season.

In seasons past, this wouldn’t be a stretch at all because the Bears would throw the ball all over the yard. But, will that be the case this season? Regardless of what Baylor does offensively, Russell will be the best quarterback in the Big 12. If the Bears were to run the ball more than they have in the past, all it will do is open up play action passes for Russell, who averaged 10.5 yards per attempt last season. While that might not necessarily mean more yardage for Russell, he’ll connect on more than enough long passes to vault himself to the top of many voters’ all-conference ballots.

3. Baylor’s defense will finish near the top of the Big 12.

Even though the Bears lose stalwarts Shawn Oakman, Jamal Palmer, and Andrew Billings up front, they will still rank among the league leaders in total defense this year after finishing second in that category in 2015. While the front seven isn’t as experienced as it was last year, it still has plenty of players that can make plays in opposing backfields, including Taylor Young (13.5 TFL), Travon Blanchard (7.5 TFL), and K.J. Smith (5.0 TFL), who played well when given the opportunity last season.

As soon as Jim Grobe was chosen to lead the program, every blogger in the country started talking about who would coach the Bears next season. Surprisingly, most of them didn’t even consider Grobe for the position, thinking that he was merely a caretaker, much like John L. Smith was for Arkansas 2012 (and what a motorcycle wreck that was!). However, given Grobe’s reputation for doing things the right way and the fact that he cares about his players well-being both inside the classroom and out, he’d be the ideal candidate to lead the program. The Baylor brass will reach this conclusion at the end of the season because….

Led by a plethora talent at the skill positions, a front seven that produces a lot of negative plays, and one of the Big 12’s top secondaries, Baylor will exceed most people’s expectations — including several members of the TSS staff — and win nine games in 2016.