1 Burning Question: How Far can Western Michigan Row the Boat?

You might wonder how a team that went 8-5 (and 6-2 in the MAC) in each of the last two seasons gets all the way up to No. 43 in our preseason rankings. The answer, which is a phrase that college football fans need to get used to, is the phrase “Row the Boat.”

No, it’s not a children’s nursery rhyme. Well, it is, but that’s not what it means here. It’s 4th-year coach P.J. Fleck’s trademark phrase for his system at Western Michigan. It is how he has got his players to completely buy in to his system and work towards a common goal.

Of course, having a cute phrase isn’t enough to win football games. Fleck also recruits better than anyone else in the MAC. It hasn’t really shown yet, but now that he’s in his fourth season in Kalamazoo, the team is almost entirely full of his recruits. It’s time for Fleck to show that those high recruiting rankings will be reflected on the football field, which is exactly what a lot of us expect to see this season.

2,803 – Combined receiving yards by Corey Davis and Daniel Braverman last year. Davis led the team in receiving, barely, with 1,436 yards. He will be heading to the NFL to join Braverman after next year, but until then he has to carry the team. If the Broncos are going to have an effective offense, they will need a strong receiving corps. Davis is going to lead the way, but someone else will have to step up to fill Braverman’s shoes if Western Michigan wants its two leading receivers to hit that 2,803 number again.

Why it Matters: Western Michigan plays a loaded non-conference schedule. Northwestern should be a very good team; it’s unlikely that Western Michigan can beat them. Georgia Southern is probably going to be much better than Illinois this year. In fact, Georgia Southern is No. 49 on our preseason preview, while Illinois is nowhere to be found. But, the world of college football is such that beating a Top 50 team from the Sun Belt earns less respect than defeating an lesser thought of team from the B1G. If Western Michigan wants to start catching some national attention, beating a Big Ten team will be the way to do it. Defeating Georgia Southern to follow it up will be gravy on top, but a win over Illinois would do more for the program.

Why it Matters: Northern Illinois has been the cream of the crop in the MAC for a while now, but that is going to end soon. Rod Carey is no Jerry Kill or Dave Doeren, and it will show. This will be Western Michigan’s chance to take down the MAC big boy. The Broncos would love nothing more than to snap NIU’s seven-game win streak in the series.

Why it Matters: The Broncos knocked the Rockets out of the MAC Championship Game last year and this season’s game will almost definitely have division championship implications. It’s impossible to project from now until the season finale, but it would be a shock if these two teams are not the class of the MAC by the time November rolls around. 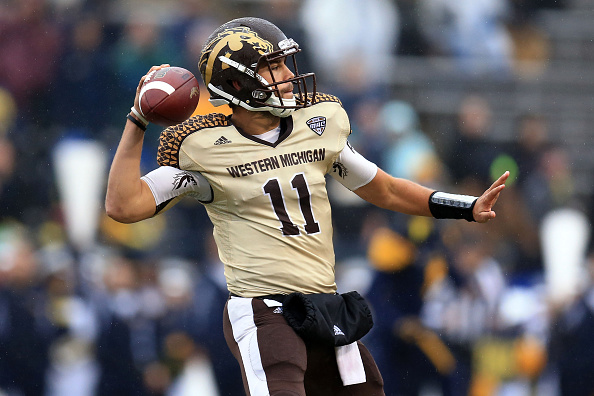 Zach Terrell, QB — The senior passer threw for over 3,500 yards last year and will be back to lead the offense again this fall. Terrell is an accurate quarterback who has averaged over 9 yards per attempt the in each of the last two seasons, yet is also able to pull down the ball and run when necessary. He had two NFL-caliber receivers last year, so someone will have to fill in for Braverman, but he and Corey Davis will be one of the best passer-receiver combos in the country.

Corey Davis, WR — Davis is one of the best receivers in college football. He caught over 90 passes for over 1,400 yards last year and will play in the NFL in 2017. He has one more year to wow everyone at Western Michigan and in the country. He will take full advantage.

Michael Henry, WR — While we don’t know who the No. 2 receiver behind Davis will be, I think Henry is the best bet. He is not quite the same as Braverman, but he is a big, physical, and fast receiver who can make plays. The offensive line, Jarvion Franklin, and LeVante Bellamy will take care of the running game. Terrell is a solid QB and Davis is an excellent receiver. This team just needs someone else as a good receiving threat to take pressure off Davis and make this Bronco attack into a strong all-around offense. Henry is the guy to watch out for.

Asantay Brown, S — The defense gave up a ton of big plays in 2015, though that was partly by design. I mean, no one intentionally gives up the big plays, but the Broncos sell out to try and get big defensive plays, knowing that it can lead to giving up some big plays of their own. It definitely leads to fun #MACtion for those of us watching, but Western Michigan’s defensive success will start and end with its leaders making big plays. Brown is one of those leaders. A versatile safety who can do everything, Brown led the team with 103 tackles, broke up five passes, recorded two interceptions, and forced two fumbles.

This might not seem so bold for a team that we have at No. 43, but Western Michigan has a tough schedule this year. Northwestern, Georgia Southern, and Toledo will all be very difficult games. Western Michigan has had trouble handling the triple option in recent years, so unless they completely change their preparation, the Georgia Southern game is probably a loss. Winning ten games, before a potential MAC championship or bowl game, might be too much to ask, but nine should be well within reach.

I hinted at this earlier, but I see the Broncos taking down the Huskies, and I don’t expect it to be close. Northern Illinois’ stranglehold on the MAC West is over starting in 2016 and the Broncos will prove it in Week 6. Emphatically.

3. Corey Davis will be a Biletnikoff Finalist

Honestly, he’s just too good not to. Even without a great second option beside him, Davis is still going to rack up some serious numbers and some serious fame. There are too many high-profile running backs and quarterbacks for Davis to get any Heisman buzz, but he will be in the Biletnikoff conversation all year long.

2. P.J. Fleck will get a major job offer after the season

He’s an outstanding coach, which is never good for a small program that’s trying to keep him. No one in the MAC has ever recruited quite like him, which means that big schools will be looking very closely at him. If he can bring Top 60 (or higher) recruiting classes to Western Michigan, he can do so much more at a major program. The big offers will come and come soon for Coach Fleck.

1. Fleck will turn it down

Fleck loves coaching at Western Michigan. He has commented, multiple times, that he can’t use his “Row the Boat” mentality at a big school quite like he has at WMU. Someday, he will get an offer from a major school like Texas, Alabama, or Ohio State, but I don’t see him leaving Western Michigan for anything less than the absolute upper tier of college football. He’s smart enough and likes WMU enough to go the Chris Petersen route until his dream job opens up.