1 Burning Question: Can a star quarterback emerge from the crowded field, because they’ll need one to?

You grow accustomed to Kansas State under Bill Snyder easily defying expectations with mid-level recruits, junior college transfers, and a keen ability to get everything out of players that seems possible. But the reality is that KSU has been at its best when Snyder has been able to have a quarterback that is a dual threat and is the catalyst for all things successful in the offense.

So when the team was down to Joe Hubener to run the offense last year after injuries to Alex Dalton and Jesse Ertz, the offense sputtered badly as Hubener completed below 50 percent of his passes but did show dual threat ability. Of course, the need will be even greater with the youngest offensive line in the conference, likely.

If the spring game is any indication, things are totally up in the air. With Ertz and Dalton back, the battle is on, but it was the forgotten Hubener who showed the best in the spring game, throwing for over 300 yards and having significantly more accuracy. No matter who gets the mantle of the starting gig, he’ll have to be big, big, big for KSU to achieve whatever goals they have in sight.

17 – Total number of 2015 starts returning along the offensive line. While the competition at quarterback appears at minimum, healthy, the fate of whoever gets that starting job will rest along the greenest offensive line in the conference. Those 17 starts returning occurred by two players. There is much youth that will need to get up to speed quickly.

47.6  – Hubener’s completion percentage in 2015. It goes without saying, which is something people say before they state the obvious, but that’s not going to cut it if KSU wants to compete for a Big 12 championship. As aforementioned, Hubener seemed to have made strides in the spring game, going 21 for 25, but that was against KSU backup defensive backs. His 613 rushing yards would be a nice compliment to what needs to be an improved passing game, no matter who gets the nod.

Why it Matters: This is important probably more for optics than how it shakes out for their season fortunes. The other two OOC games should be wins, but going out to Palo Alto to open the season is a striking difference from last season, which saw South Dakota, UTSA, and Louisiana Tech as non-Big 12 opponents. We’ll find out early on what the deal is with Kansas State on a national level.

Why it Matters: That win last year over WVU was the reason KSU was able to be bowl-eligible. This year, they start off the conference season with the Mountaineers. KSU goes on the road to WVU, Oklahoma, ISU, Baylor, and TCU in-conference. They’ve got to find a way to get at least one of those if they’re going to improve upon last year’s record. Their only road win in 2015 was against barely-breathing Kansas. WVU hasn’t beaten KSU since 1930.

Why it Matters: Last season, KSU lost a heartbreaking shootout against TCU at home. It was the second straight 1-possession loss which led to a string of six losses in a row. This year, TCU comes at the last game of the year. They could be jostling for big things or a bowl game depending on how the season goes. Either way, it should be a close game with fortunes on the line for both. 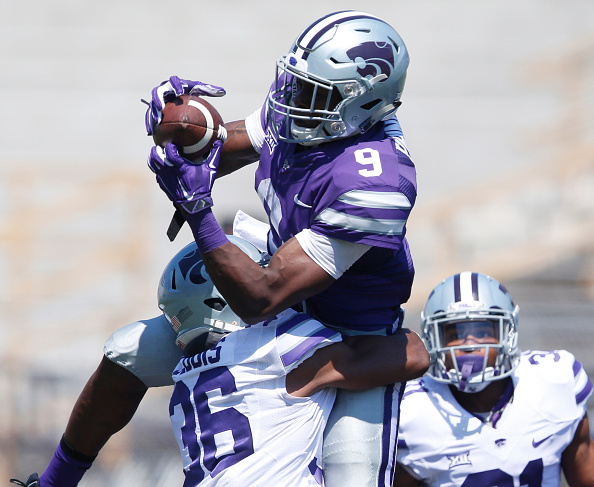 Byron Pringle, WR  —  With a young offensive line, question marks at quarterback for the moment, and a lack of playmaking explosion that you’re accustomed to with the Wildcats, Pringle by way of Butler Community College could be the shot in the arm that the offense needs. He was one of the stories of the spring game, though it was against the second string.

Whoever starts at quarterback, QB  —  There’s no question this is the biggest spot needing stability on the team. As aforementioned, they have to be encouraged by the Spring Game, where Hubener showed accuracy that he lacked last year, and surely the injury stick won’t belt KSU again as hard this year. Ertz, Dalton, and Hubener should go into this thing neck and neck, which is good for depth.

Dante Barnett, S  —  The one time all-conference safety missed all but one game last season for what was a bruised and battered defensive backfield (noticing an injury trend, kids?). He returns for a fifth year and is the most individually talented player on defense in a place where they need that talent. And some sort of witchcraft that guarantees good health.

Elijah Lee, LB  —  This veteran front seven will be led by Lee, who returns as a junior after leading the team in tackles with 80. This could actually be a pretty good defense so long as they remain moderately healthy. The back end should be shored up by the return of Barnett, promising sophomore Duke Shelley, and Cal transfer Cedric Dozier. That will allow Lee and his front seven cohorts to make even more plays.

Bold is relative when you have to do five of them, but considering the heavy losses on offense, uncertainty along the line and at quarterback, and the fact that the schedule is more brutal than 2015, it would be a good accomplishment to roll back into a bowl game.

4. KSU will play Stanford to a last second finish, either way

Most won’t give the Wildcats a chance against Pac-12 heavyweight Stanford. But the feeling here is that KSU, who like Stanford, seems to get the very most out of everyone who puts on a jersey, will be in it until the end. Don’t be even mildly surprised if they pull off the upset.

Injuries ransacked the club last year, and it showed in their lack of turnover production. Barnett being back at full health will be a key. He’s the guts of that defense. Lee will continue to improve. They should be much stingier against the run with a more experienced defensive backfield. And this defense will flat carry them to some wins, and be marked as one of the most improved in the country.

2. Pringle will be all-conference

This isn’t because I’m into the chips. They’re actually not that good and too annoying to eat. Byron, though, will be a splash onto the scene type, and it’ll lead to big rewards when it’s all said and done. He seems to be developing a good rapport with Hubener, and at the very least, seems to be capable of the sorely needed big plays, as evidenced by his 73-yard touchdown snag this spring.

1. This will not be Bill Snyder’s final year

It’s easy to think the septuagenarian coach will step away, especially seeing as it’d be his second time doing so, but if you like your job and you like where you’re at, why go? Retirement either is something you’re built for because you have plenty to keep you busy … or is torture because you can’t help but want to work. Snyder sticks around after a fairly successful 2016-17, and next year, the same questions get asked.