Make no mistake about it: Arkansas State football is the gold standard for excellence in the Sun Belt. The Red Wolves have either won or shared the league championship in four of the last five years and have compiled an impressive 33-6 record in conference play during that span.

Despite losing all of these star players, there are plenty of reasons to think that the Red Wolves will repeat as conference champions this year. Running backs Johnston White (616 yards, 6.22 ypc, 14 TD) and Warren Wand (707 yards, 6.04 ypc) return this fall, after turning in solid performances behind Gordon last year. They’ll run behind a veteran offensive line —  anchored by 2015 All-Sun Belt performers Colton Jackson and Jemar Clark — that returns seven players who have combined for 114 career starts. Top deep threat Dijon Paschal (541 yards, 19.32 yards per catch) returns as well.

On the other side of the ball, Arkansas State also welcomes back a wealth of talent. Most of the two-deep from last year’s front seven — which ranked second in the league in sacks and TFL — returns, including All-Sun Belt DE Ja’Von Rolland-Jones (17 career sacks), second team All-Sun Belt LB Xavier Woodson-Luster, and leading tackler Khari Lain (78 tackles, 7.5 TFL). Similarly, the secondary has plenty of key players coming back, with second-team All-Sun Belt performer Cody Brown (3 INT, 9 PBU) and Money Hunter (3 INT, 4 PBU, 2 TDs) returning to lead an aggressive unit that led the nation in interceptions (26) and pick sixes (6) last season.

In addition to all of the talent returning, Arkansas State could receive a huge shot in the arm from some high profile transfers this fall. WR/KR Cameron Echols-Luper and DL Dee Liner impressed coaches in the spring, and could play key roles for the Red Wolves this fall. That will make an already-talented roster even better.

26 – The number of interceptions that Arkansas State had last year. Although it gave up its share of yardage, the ASU secondary was one of the nation’s best when it came to making plays last year, ranking 12th in the country in passes defensed (71), first in interceptions (26), and first in pick sixes (6). While top cover man Rocky Hayes (6 INT) departs, most of the two-deep in the secondary is back, making this unit the strongest in the Sun Belt again this season.

10 – The number of interceptions that Arkansas State threw in its four losses last year. As well as the offense played last season — especially in Sun Belt action where it averaged 490.8 yards per game and 48.6 points per game — the Red Wolves did throw 15 interceptions last season, ranking 8th in the conference. If ASU is going to win the Sun Belt — and earn a marquee victory in non-conference play — this number must improve this fall. After all, the Wolves were 1-4 last year when throwing 2 or more picks, and a perfect 8-0 when they didn’t.

Why it matters:  The Rockets actually beat the Red Wolves twice in 2015, winning both the GoDaddy.com Bowl in January (63-44) and the regular season meeting in September (37-7) by convincing margins. While this game has no bearing on A-State’s quest to repeat as Sun Belt champions, it’s important that the team start off the season on the right foot. Although Toledo hasn’t won a MAC Championship in over a decade, it has beaten some high-profile opponents during that time, including the Arkansas Razorbacks last season. A victory over the Rockets would help the Red Wolves gain more respect at the national level.

Why it matters:  While coaches always say that every game is important, deep down, they know how crucial it is to win a rivalry game. Aside from Memphis — whose series with Arkansas State is set to resume in 2020 — the Ragin’ Cajuns are the Red Wolves’ oldest rival, with the series dating all the way back to 1953. While ULL finished with a losing record last year, it did win nine games in each of the previous four seasons. If — and it’s a big if — the Cajuns return to their winning ways, this game could decide which team wins the Sun Belt.

Wednesday, October 5, Georgia Southern
Record in the Last 5 Meetings: 0-1
Last Year’s Result: Did not play. The only meeting in the series was in the 1986 1-AA Championship game, which Georgia Southern won 48-21.

Why it matters:  The last time these two teams squared off, a championship was at stake. The same thing could be true when they meet again this year. The Eagles have been one of the most consistent teams in the Sun Belt since joining the league, posting an impressive 14-2 record in conference play. Although Georgia Southern undergoes a coaching change this fall, it should still have one of the best ground games in the country, led by Matt Breida, Kevin Ellison, and Favian Upshaw. The matchup between the Eagle rushing attack and the ASU run defense will be more than worth the price of admission. 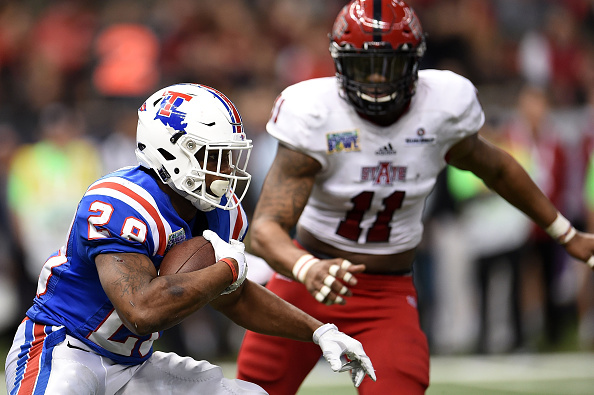 NEW ORLEANS, LA – DECEMBER 19: Kenneth Dixon #28 of the Louisiana Tech Bulldogs is pursued by Ja’Von Rolland-Jones #11 of the Arkansas State Red Wolves during the third quarter of the R+L Carriers New Orleans Bowl at the Mercedes-Benz Superdome on December 19, 2015 in New Orleans, Louisiana. (Photo by Stacy Revere/Getty Images)

Ja’Von Rolland-Jones, DE – Rolland-Jones has been the Red Wolves’ top pass rusher the past two seasons, leading the team in sacks each year. He was the most disruptive player in the Sun Belt last season, leading the league in sacks (8.5) and forced fumbles (4), while finishing seventh in the conference in tackles for a loss (12.5). A two-time all-conference selection, (second team in 2014, first team last year) Rolland-Jones will be the anchor of a very talented defensive line that will be the best in the conference this year.

Dijon Paschal, WR – With 66 career catches for 1,183 yards, Paschal is the Red Wolves’ most experienced receiver. He was ASU’s top deep threat a year ago, averaging 19.32 yards per catch. Opposing defenses simply couldn’t stop him in November last year, as he eclipsed the 100-yard barrier in all three games, even though he never caught more than four balls in any of those contests. Expect him to have a much bigger role in the offense this year, with the departures of McKissic and Houston.

Cody Brown, S – A second-team All-Sun Belt performer a year ago, Brown did a little bit of everything for the Red Wolves. He did a great job in run support last year, finishing third on the team with 60 tackles. Brown was even better against the pass, leading Arkansas State in passes broken up (9) and passes defensed (12), while ranking second on the team with three interceptions. He’ll have a very active role in the secondary again this fall.

Warren Wand, RB – Wand was the perfect compliment to leading rusher Michael Gordon last year, running for 707 yards and 5 TDs, while catching 18 passes for 135 yards. He was especially dangerous on second down, rushing for 350 yards on 42 carries (8.33 ypc). He’ll team with Johnston White (99 carries, 616 yards, 14 TDs) to give the Red Wolves a dangerous 1-2 punch at running back, which will take a lot of pressure off of the quarterback(s).

5. The Red Wolves will have the best defensive line in the Sun Belt this year.

This really isn’t that bold of a prediction. After all, Arkansas State’s front four was one of the best in the league last season, ranking second in the Sun Belt in sacks and tackles for a loss. However, this year’s edition could be even better. Despite the loss of second-team All Sun Belt performer Chris Stone (7.5 TFL), the Red Wolf front seven is loaded with talent including Rolland-Jones, Darius Rosser (6.5 TFL), Chase Robison (7.5 TFL), and Waylon Roberson (26 tackles, 2.5 TFL). Alabama transfer Dee Liner will also be in the mix for playing time after a strong performance this spring. Expect this unit to make a lot of plays behind the line of scrimmage.

4. A-State will get plenty of production from the quarterback position.

Many preseason publications think that the Red Wolves will take a step back this season because of Knighten’s departure. I’m not one of them. After all, Pittsburgh transfer Chad Voytik played well as the Panthers’ starting quarterback in 2014, connecting on 176 of 287 passes (61.3%) for 2,233 yards and 16 TDs, while adding another 466 yards on the ground. If he doesn’t take the first snap from center when the season starts, it will be because Justice Hansen outplayed him to earn the starting spot. Either way, it’s a victory for the Red Wolves.

3. Buster Faulkner will be a Broyles Award finalist.

As noted earlier in the preview, some college football experts think that the Red Wolves might struggle on offense with the loss of Fredi Knighten, J.D. McKissic, Tres Houston, and Michael Gordon. Yet, they don’t realize how many other weapons the Red Wolves have on the roster, such as Wand, White, Paschal, and transfer Cameron Echols-Luper, whose blazing speed brings a completely different dimension to the offense. The amount of talent and speed at the skill positions, coupled with a veteran offensive line that returns two All-Conference performers and 114 career starts makes this a very dangerous offense. Faulkner — whose units at Murray State and Middle Tennessee broke a number of school records — will do the same thing in Jonesboro this fall, helping A-State to lead the Sun Belt in total offense. Since many in the media won’t be expecting that to happen, he’ll be a finalist for this award, which is presented annually to the nation’s top assistant coach.

Even though the Rockets have won the last two meetings convincingly, the Red Wolves will beat them in the season opener. A-State’s offense will too much for the Toledo defense — which will be breaking in several new starters on the defensive line and secondary — to handle.

1. The Red Wolves will win the Sun Belt.

Powered by an electric offense, a stellar defensive line, and an active secondary that makes plays, Arkansas State will win the Sun Belt conference for the second straight season.