1 Burning Question: Will the revolving door at head coach be too much for the Eagles to overcome in 2016?

There are unavoidable negatives when you are a successful FCS or mid-major FBS program. One of those negatives is that bigger schools with deeper pockets will always be recruiting your coaches.

The last coach Georgia Southern had that lasted five years was Paul Johnson (1997-2001). Most of the time, GSU’s head coaches have moved on because they were successful. Paul Johnson moved on to Navy. Jeff Monken went to Army. Last year, Willie Fritz bolted for Tulane after just two seasons in Statesboro.

Since Summers is a defensive-minded coach, the biggest question is “what will he do with the offense?” Rance Gillespie — who was the offensive coordinator for GSU under Chris Hatcher — will take over as co-offensive coordinator/QB coach. David Dean will join Gillespie as co-coordinator and will be in charge of the wide receivers. One of the things that Summers hopes Dean will add is improvement in the screen and passing game.

Under new management, will Georgia Southern move away from the triple option? The answer is no, but the Eagles do want to improve their passing game for when the opponent stacks nine men in the box to stop the run. With a talented offense returning virtually intact from a year ago, the Eagles could be even more dangerous with a polished passing game.

7.92 — This is the average number of yards running back Matt Breida gained when he ran the ball in 2015.  Breida is a home-run hitter who ran for 1,608 yards and 17 TD last season. He is joined in the backfield by four other players that ran for over 500 yards last year.

38.3 — This is the completion percentage for Georgia Southern on third downs in 2015. The Eagles ran the ball very well last season but when they had to pass, they struggled mightily. For the year, they completed just 43.1% of their passes (Kevin Ellison completed 44.9%, Favian Upshaw completed 43.1%). If GSU wants to get to the next level, this percentage must improve.

Wednesday, Oct 5, at Arkansas State
Record in the Last 5 Meetings: 1-0 (last meeting was the 1986 1-AA Championship Game)
Last Year’s Result: did not play

Why it matters: Along with Appalachian State, these two teams are the front-runners in the Sun Belt. This is a pivotal game for the Eagles if they want to win the conference championship. Not only is it a road contest, but it’s on a Wednesday and will be televised on ESPN 2. This is the perfect opportunity for Georgia Southern to make a statement.

Why it matters: Last season, the Eagles traveled to Boone, North Carolina, and got destroyed by the Mountaineers. Appalachian State has had the upper hand over the Eagles in recent years, winning six of the last eight in the series. Both of these teams came up from FCS on a similar timeline, and even before that, they were rivals. Their rivalry is named “Deeper than Hate” and dates back to 1932. With so much similarity and trajectory between the schools, there is a lot on the line in this game, including the Sun Belt championship.

Why it matters: After scoring 69 points on Georgia State in 2014, the Panthers promptly went to Statesboro in 2015 and shut down the Georgia Southern offense. Some might substitute the Georgia Tech game here in terms of importance because of the last game between Tech and Southern. I’m keeping State in here because Georgia Southern cannot afford to give Georgia State two straight wins. Southern needs to protect their standing in the state and not lose ground in recruiting or stature to the upstart Panthers. The added bonus is that this is a conference game and the Eagles cannot afford to drop one here. 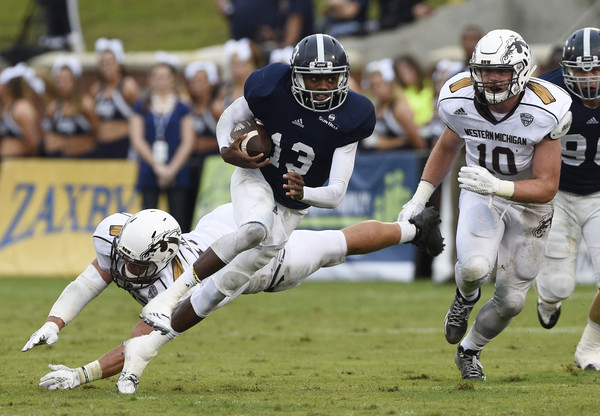 Matt Breida, RB – Breida is not the only running back on the roster, but he is definitely the best. He is a smaller back, yet he can get yards inside or out. If he finds a hole, you will be looking at the back of his jersey.

Favian Upshaw, QB – This guy is special in that whenever you put the ball in his hands, he can make you pay. On the ground, he ran for 583 yards on 80 attempts for an average of 7.29 yards per carry.The area where he must improve is in the passing game. On third downs, he completed just 27.8% of his passes. If he can add more of a passing dimension to his game, the Eagles offense could be unstoppable.

B.J. Johnson, WR – We’ve talked multiple times in this preview about how Georgia Southern must improve its passing game. Johnson is clearly the Eagles’ leading receiver, as he caught 15 passes last season and was the only player on the team to average more than one catch per game. With the help of the quarterbacks, Johnson must step up his game in 2016.

Ironhead Gallon, LB – How can we leave a guy named Ironhead out of our preview? We can’t. Georgia Southern’s front seven is stacked with returning talent and one of them is senior Ironhead Gallon. Gallon picked off a pass and took it in for a TD in the spring game. Southern will need more of this in 2016, as the back four is a huge area of concern for the Eagles. The better the front seven plays, the more time the young secondary will get a chance to grow.

Breida ran for over 1,600 yards in 2016, yet still had six games where he didn’t reach 100 yards and only topped the 200-yard barrier in one game. Since the Georgia Southern backfield is so deep, the ball will still get spread around. But, expect Breida to continue to be a monster in 2016.

The first big conference game of the year on the road will see the Eagles suffer a setback, as they will lose a close game to Arkansas State.

3. The week after losing to Arkansas State, Georgia Southern will beat Georgia Tech

The last time these two met, Georgia Tech somehow escaped with a 42-38 win. This time, Georgia Southern will be even more motivated after a loss the previous week to the Red Wolves. Georgia Tech will make a key mistake late, and Favian Upshaw will throw a game-winning TD to show off Georgia Southern’s improved passing attack in the upset.

The last time Appalachian State came down to Statesboro, the Eagles came away with a win. The same thing will happen this year. GSU will be in a “must win” situation, as the Mountaineers will likely come in to the contest with an undefeated conference record.

Despite the loss to Arkansas State, Georgia Southern will win the Sun Belt conference. The Eagles’ only defeat in league play will come at the hands of the Red Wolves, who will fall to both Louisiana-Lafayette and Georgia State.