1 Burning Question: Will Duke rebuild or reload in 2016?

Over the past three years, the Blue Devils have been one of the more consistent teams in the ACC, winning eight or more games in every season during that span.

That’s a very difficult question to answer. After all, offensive coordinator Scottie Montgomery is now the head coach at East Carolina, while offensive line coach John Latina — the man responsible for transforming the Duke O-line into one of the best units in the league — announced his retirement. In addition, the Blue Devils lose ACC Defensive Player of the Year Jeremy Cash, All-ACC center Matt Skura, and leading receiver Max McCaffrey this fall.

Despite these losses, there are plenty of reasons to be optimistic about Duke’s chances this season. Three starters return from a solid offensive line that averaged 192.92 yards per game last year. They’ll lead the way for running backs Shaun Wilson (5.05 yards per carry) and Jela Duncan (6.87 ypc), who both played well when they got the opportunity in 2015. The Devils also have a pair of proven receivers in T.J. Ramming (43 catches, 571 yards) and Anthony Nash (32 catches, 475 yards).

Defensively, Duke is also in great shape. DeVon Edwards (1 INT, 6 PBU), Deondre Singleton (6 TFL, 4 PBU, 2 forced fumbles), and Breon Borders (3 INT, 9 PBU) return to anchor what should be one of the top secondaries in the conference. And, while the front six loses a few starters, it still welcomes back seven players who recorded 2.5 or more tackles for a loss last season.

5.37 – The number of yards per play that the Duke defense allowed last year. Although it struggled late in the season, the Blue Devil D was still one of the best in the conference, ranking fourth in yards per play and third down conversion percentage. It was especially impressive during the first eight games of the 2015 campaign, allowing just 4.18 yards per play. Should Duke match that production this fall, it’ll be in position to win the Coastal Division.

3.68 – This was the Blue Devils’ average yards per carry in the fourth quarter last year. This number is a real head-scratcher. After all, Duke had no trouble running the ball in the first three quarters of the game, averaging 5.175 yards per carry. Yet, for some reason, it couldn’t get the job done in the final stanza, running for almost a yard and a half less in the last 15 minutes of the contest. The Blue Devils have to improve in this area if they’re going to return to the postseason for the fifth straight year.

Why it matters: As we saw from last year’s tragic defeat against Miami, one loss can quickly snowball into a series of losses, which can derail a promising season. With back-to-back road trips against Northwestern and Notre Dame, the Devils could potentially enter this contest with two straight losses, making this a “must win” game in order to stop the proverbial bleeding. Regardless of how the previous two games turn out, Duke needs a “W” in this contest to remain at the top of the standings. In a division as deep as the Coastal — one of the toughest divisions in the nation — every win counts.

Why it matters: This game will determine whether the Devils finish near the top of the division or in the middle of the pack. Under the leadership of new head coach Justin Fuente, the Hokies will be one of the most improved teams in the nation this year. If Duke is going to compete for the Coastal crown, it must defeat Virginia Tech at home, something it hasn’t done since 1981.

Why it matters: Make no mistake about it: every Duke football player wants to win the Victory Bell rivalry game. Whether both teams are competing for the conference championship or simply playing for pride, this is a “must win” game for everyone involved. The Devils will have added motivation for this year’s contest after losing last season’s game by 35 points. 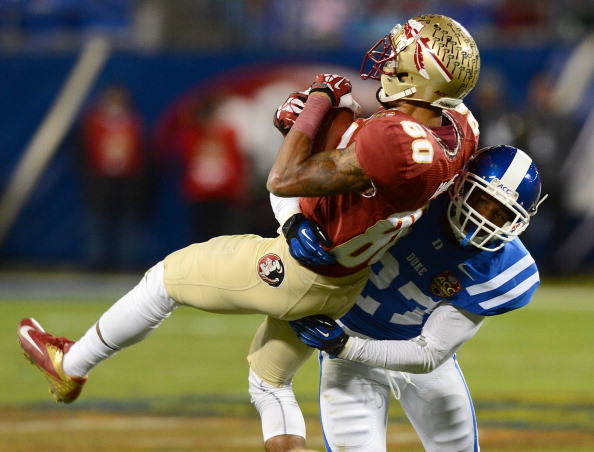 DeVon Edwards, CB — A true jack-of-all-trades player, Edwards can do whatever his coaches need him to do. During his outstanding career, he’s excelled in run defense (133 tackles, 7.5 TFL in 2014), as a pass rusher (5 career sacks), and as a coverage specialist (5 INT, 21 PBU in his career). He’s also a dangerous kick returner, ranking sixth nationally in kickoff returns last season.

Anthony Nash, WR — Nash was the Devils’ top deep threat last year, leading the team with 14.84 yards per reception. He did his best work on third down, catching 15 passes for 203 yards, with 10 of those receptions resulting in a first down. With the departure of McCaffery, he will have a much bigger role in the offense and easily eclipse last year’s numbers (32 catches, 475 yards).

Casey Blaser, RT — A two-year starter at right tackle, Blaser has helped Duke running backs run for an average of nearly 4.8 yards per carry the last two seasons. With 26 career starts under his belt, he’s the most experienced lineman on the team and will be the anchor of a talented Devil offensive line this fall. Expect him to earn a spot on the All-ACC team after being an honorable mention selection last year.

Tinashe Bere, WLB — Bere moves over to WLB after playing mostly at MLB last season. While he wasn’t a full-time starter in 2015, he still put up some solid numbers, registering 58 tackles, 4.5 TFL, 1.5 sacks, and 1 forced fumble. He got even better during spring practice, earning Co-Most Improved Defensive Player honors at the conclusion of camp. He appears more than ready to replace Dwayne Norman, who led the team in tackles last season.

Although Jeremy Cash departs, the Devils should have another safety on the all-conference team this fall. Singleton was arguably the most versatile defender on the team last season, ranking fourth in tackles, third in TFL, third in passes defensed, and second in forced fumbles. He will post Cash-like numbers this fall.

4. Duke ranks in the top four of the conference in yards per carry for the second straight year

Even though it loses Cash, Norman, and a few starters up front, the Blue Devil run defense will still be among the league leaders in rushing defense and yards per carry. As noted earlier in the preview, Duke has seven players who recorded at least 2.5 tackles for a loss last season, as well as Singleton, who finished third on the team with 6.0. With so many talented players up front, the Devil run defense will be just as tough — if not tougher — than last year’s edition.

3. Despite all of the losses, Duke’s running game will continue to thrive.

The Blue Devils lose their top running back, two of their best lineman, and arguably the best offensive line coach in school history this fall. While many experts think that Duke’s ground game will take a step backwards, I think they’ll be even better. The offensive line returns three starters from last year’s squad — which averaged 4.79 yards per carry — as well as running backs Jela Duncan (460 yards, 6.87 ypc) and Shaun Wilson (424 yards, 5.05 ypc). The combination of experience and explosiveness will make the ground game one of the best in the ACC.

2. Duke will get plenty of production from the quarterback position.

Blue Devil fans were understandably concerned when Sirk tore his Achilles’ tendon during winter conditioning. However, regardless of whether it’s Sirk or Parker Boehme under center, Duke will be just fine at quarterback this fall.

1. The Blue Devils will win eight games for the fourth straight season.

Behind a solid ground game, productive quarterback play, a stellar run defense, and a talented secondary, Duke will win eight games again in 2016.