We may not be turning our clocks an hour back just yet, but Maryland has turned theirs all the way back to 1961. This weekend Maryland will take the field against Penn State wearing a uniform similar to the one they wore in 1961, the first time the school recorded a victory over the Nittany Lions. Maryland may get a lot of heat from the college football world when it comes to their uniforms, but there should be no room for criticism here. Maryland and Under Armour did a splendid job in recreating Maryland’s traditional look.

At first glance you may look at Maryland’s uniform and think you are looking at a Nebraska uniform. It’s true, there are some Nebraska-esque features here with a plain red uniform and white lettering and numbering, complete with white shoulder stripes. But this is true to the look Maryland once wore, and it is nice to see it so faithfully recreated in all its simplicity. You cannot see it from here, but the front of the jersey scraps the “Maryland” that typically appears on the front of the jerseys, thus sticking to the basics with a plain red jersey and regular white numbers. 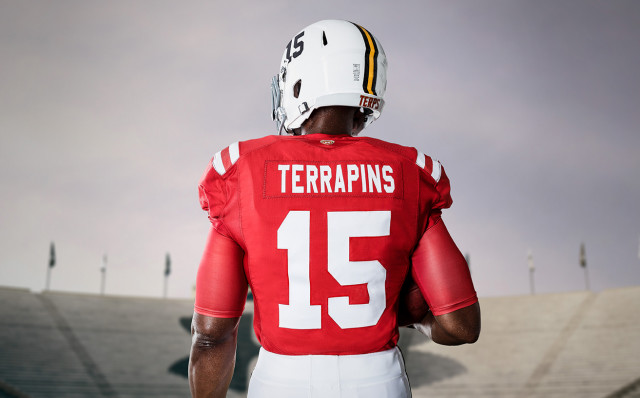 Maryland’s helmet is also as basic and simple as ever, which is quite a contrast from today’s helmets that utilize the state flag of Maryland as a design element. For the record, I have come to really dig Maryland’s modern look and uniform and helmet designs, but I will always be a sucker for a good throwback uniform. Here we see Maryland’s helmet is white with black and yellow stripes down the middle to complete the uniform’s attempt to stick to the colors commonly connected to the state of Maryland. The stripes can also be seen running down the side of the white pants, which you can see in the photo below. A standard block number matching the player’s uniform number also appears on the side of the helmet. 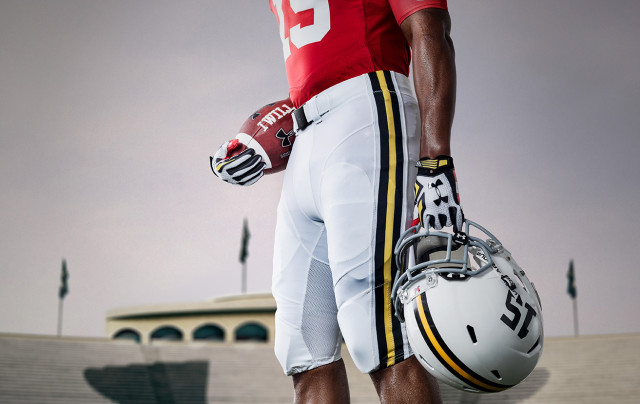 The timing of the throwback uniform is a pure coincidence, but it is interesting to see Maryland return to the football field wearing a throwback uniform in its first game since the firing of Randy Edsall. Edsall was quick to embrace Maryland’s new signature look with the state pride uniforms, a design that has evolved and grown with the program since the shocking reveal. Now, with Edsall removed as head coach, Maryland returns to its classic look. There is some symbolism at play here, but it was not initially designed that way as these uniforms are cooked up well in advance. In any event, Maryland will turn a page while turning things back, and they could not do it any better way.

One more thing is guaranteed. The uniform combo of Maryland in their 1961 throwbacks and Penn State in their classic road whites should make for a truly classic look on the field. You may not find another uniform combo like it this weekend.