The Memphis Tigers showed off their special tiger stripes chrome helmet for a Thursday night nationally televised contest. Perhaps by design, the Tigers wore their special helmets against Cincinnati, home to the NFL’s Cincinnati Bengals. This can’t be a coincidence.

Geez. Memphis couldnt come up with their own Tiger-stripe pattern? #NoTwoTigersHaveSameStripes pic.twitter.com/XMk7bco9Wy

The similarities are striking, from the stripe pattern on the helmet to the shoulder sleeve pattern. Whether a clone or a unique take on the uniform, Memphis wears it well. Memphis was one of the early-adopters of the chrome helmet fad in college football, and the way it blends with the tiger stripes is perfect for the program’s look. Metallic blue and silver chrome is a good blend, especially under the lights of primetime.

If there is one thing I would have changed with the Memphis uniform last night, it would be the smoke gray jersey look. Memphis can pull it off, but sticking to blue would have been preferable.

This is not the first time Memphis has shown off their Cincinnati Bengals-inspired helmets. In fact, the tiger stripe design made its debut against Cincinnati in 2013. Memphis introduced the world to the tiger stripes October 30, 2013 for a home game against the Bearcats. Later in the season Memphis wore their stripes once again against Temple, although this version saw bolder stripes to pop in a different way with the blue jerseys they were paired with, as opposed to the black uniforms Memphis wore against Cincinnati. Memphis lost both of those games in 2013, so these were certainly no lucky stripes. 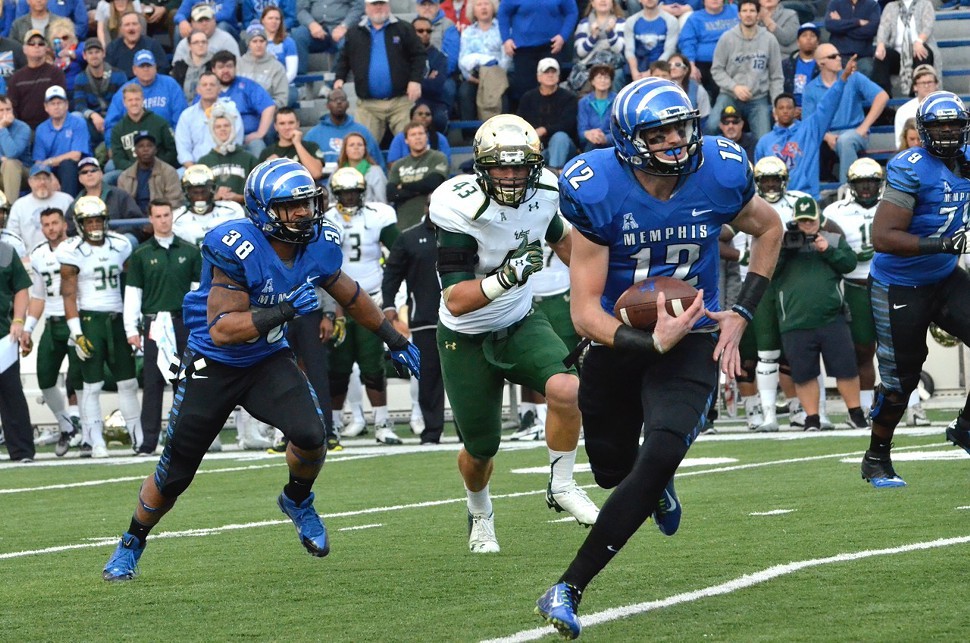 In 2014, Memphis brought back their second tiger stripe helmet that had been worn against Temple in 2013. This time the helmets were worn for the USF game with the blue jerseys. Memphis also picked up their first win in the tiger stripes. Now, with Thursday night’s win against Cincinnati the Tigers have won two straight games in their tiger stripes.

So who should the next team to wear a virtual clone of an NFL uniform? The Oklahoma State Cowboys with a star on the helmet? Boston College with Eagles wings on the helmet (think Mike Mamula)?