The world of college football jerseys will continue to evolve in one way or another, but one thing will pretty much always stay the same. Home teams will wear a colored jersey and visiting teams will wear a white jersey. That is, of course, unless the home team is LSU.

While most of the home teams in the country will wear one of their school colors on their jerseys when playing at home, LSU will instead suit up in a white uniform. There will be the rare occasion when LSU chooses to wear their purple uniforms at home, but you can pretty much guarantee that if you are watching an LSU football game any year, the Tigers will be wearing white. It has become a tradition for LSU, and it is one that has spanned decades.

Back in 1955 LSU hired Paul Dietzel to be the head coach of the football program. It was his first head coaching gig, but he was quite the understudy before accepting the job. Dietzel was an assistant coach for legendary head football coaches Earl “Red” Blaik of Army and Bear Bryant at Kentucky. Things did not go so well for Dietzel as the head coach. LSU went 3-5-2 in his first season, 3-7 the following year. In his third year as head coach, Dietzel coached LSU to a 5-5 record, moving up to 7th place in the Southeastern Conference after finishing 11th the previous season. Dietzel was a superstitious man, so when he found something that worked or led LSU to a victory, he would take note and try to recreate whatever he could to get LSU a win. This forced Dietzel to try just about anything and everything he could think of just to mix things up. 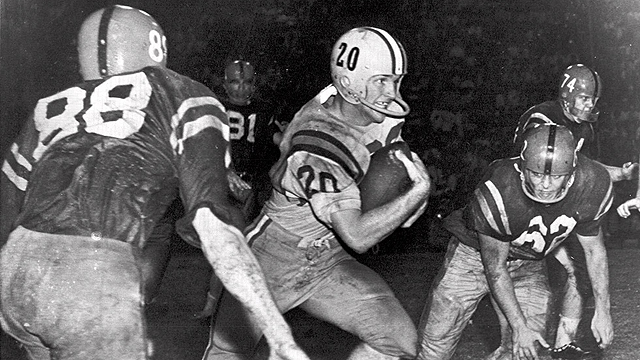 In 1958 Dietzel decided to buck conventional uniform logic and have his Tigers wear white uniforms for home games. LSU’s success in 1958 may have had more to do with Dietzel’s three-man platoon system that utilized the idea of rotating players in to keep players fresh during a game. The first string offense and defense was referred to as The White Team. Perhaps it was by design then that Dietzel chose to have his team wear white jerseys at home, and on the road as was the norm. Whatever the case, the white uniforms stuck and LSU went on to win the first national championship in school history. There was no way Dietzel would try to mix things up now, right?

Dietzel suited his team in white jerseys again in 1959. The Tigers didn’t win another national title, but they did go 9-1 in the regular season and earned a berth in the Sugar Bowl. In Dietzel’s final season in Baton Rouge, LSU went 10-1 and won the Orange Bowl. Not too shabby. Dietzel left LSU for Army after the 1961 season, but his replacement, Charlie McClendon kept the tradition going. So did Jerry Stovall when he came in as head coach. Then the NCAA stepped in.

In 1982 the NCAA made a rule stating each home team must wear a dark colored jersey for homes games. That put an end to LSU’s white jersey phase in Death Valley. The Tigers resorted to wearing purple jerseys at home and did so for 1983 and 1994. It was current Big Ten Network analyst and former LSU head coach Gerry DiNardo that challenged the NCAA rule on a mission to allow for LSU to wear white jerseys at home in 1995.

From the LSU media guide;

After petitioning the rules committee of the American Football Coaches Association, [DiNardo] personally met with each member of the NCAA Football Rules Committee. DiNardo’s efforts were successful and the Tigers were allowed to wear white jerseys again beginning in 1995. A stipulation of the new rule was that the visiting team would have to give the home team permission to wear the white jerseys. The first team to deny LSU’s request was DiNardo’s former team, Vanderbilt.

Petty Commodores. Because the road team dictated the terms, LSU opted to play the game in a special gold jersey instead of a purple jersey. Gold is a tricky color to pull off on a football uniform, as LSU has proven through the years… 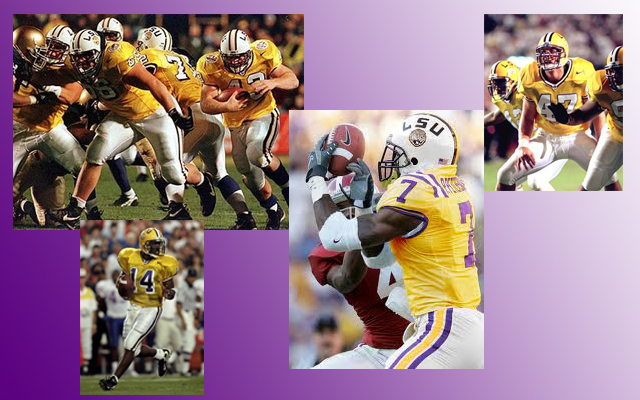 It did not take long after that for the SEC to step in and adopt a league rule to allow for the home teams to determine the uniform decisions, instead  of the road teams. In 2000 order was officially restored in Baton rouge when the Tigers returned to wearing white jerseys at home. That was Nick Saban’s call, although it came with a slight caveat. Saban decided LSU would wear white uniforms for all home game sin SEC play, but would wear purple jerseys for non-conference matchups at home. The lone exception to that was the home opener, which would have the Tigers in white. Saban’s return to the white uniforms in conference play may have rekindled the old superstition.

In Saban’s first season LSU knocked off No. 11 Tennessee in overtime. That led fans to tear down the goal posts in Tiger Stadium for just the second time in school history. It happened again later in the season after LSU beat Alabama for the first time in Baton Rouge in 31 years. The following year LSU was in the SEC Championship Game and two seasons later LSU brought home a BCS national title.

It may have started off as a silly superstition, but LSU has made wearing white uniforms at home their thing. Here’s hoping that stays unchanged for years to come.

Have a uniform you’d like to see profiled or explained? Send your uniform questions, photos and more my way on Twitter.