Maybe you have outgrown Halloween, but that doesn’t mean your favorite college football team has to do the same. On Saturday, college football players may not dress up in costume this weekend, but a handful of programs will get in the Halloween spirit with their uniforms. If there is ever a week to give a pass to those who choose to employ the “black for black’s sake” philosophy when it comes to uniforms, it is this weekend.

This is also a good opportunity for teams wearing orange to get in the spirit as well. Better yet, if teams with either an orange uniform or a black uniform are squaring off against each other, work it out to wear both colors on the football field on Saturday. That is exactly what UTEP and Southern Mississippi will be doing in their Conference USA game. The Miners had to receive permission from the Conference USA office to wear their all-orange uniform on the road, and thankfully those in charge in Conference USA allowed it.

UTEP got permission from C-USA to wear all orange uniforms at Southern Miss, who will wear all black on Halloween pic.twitter.com/FA9kTem1QS

In the Pac-12, Utah will host Oregon State. The Utes had the game scheduled for a blackout game, which means Utah will be wearing its all-black alternate uniforms. It will be the eighth blackout game in Utah history, owning a record of 5-2 in blackout games so far. It would be fitting to see Oregon State do what UTEP did, but never fear — the Beavers will still be dressed for the occasion even in their road uniforms for this weekend.

Some other games that could (should?) get in the Halloween spirit:

Oklahoma State vs. Texas Tech: This one is incredibly easy. The Cowboys can wear just about whatever they want, and Texas Tech is dressed in black from head to toe. Make it happen.

Georgia vs. Florida: Georgia in an all-black uniform has happened before. The Dawgs have even worn a black helmet. Why not in Jacksonville against the Gators, who would be wearing orange? The two teams will both wear a home uniform, sticking to the traditional looks instead of having a little fun with it.

Clemson vs. North Carolina State: the Wolfpack could have used this opportunity to break out their alternate-black uniform. Instead, this week N.C. State unveiled its lame Iron Wolf uniform.

Syracuse vs. Florida State: Florida State has gone alternate-black before, and there has been a black FSU helmet in the past, so it’s a possibility. FSU in all black and Syracuse in orange? Yes please.

Miami vs. Duke: I loathe seeing Duke wear its alternate black uniforms, but if they can be paired up against Miami’s orange unis, maybe even with those orange helmets, I’ll allow it.

Tennessee vs. Kentucky: The Wildcats are holding a blackout for this weekend’s game against the Vols. Kentucky will be in alternate black uniforms. It could look something like this.

Illinois vs. Penn State: Don’t count on it, but if Penn State suited up in the original school colors, black and pink, to go against Illinois in orange, it could work. Too bad Illinois is wearing its blue helmets this weekend. Dummies.

Vanderbilt vs. Houston: Wait, what? Put Vandy in their black helmets and let’s see Houston roll out in its specially designed Halloween uniforms from a couple seasons ago… 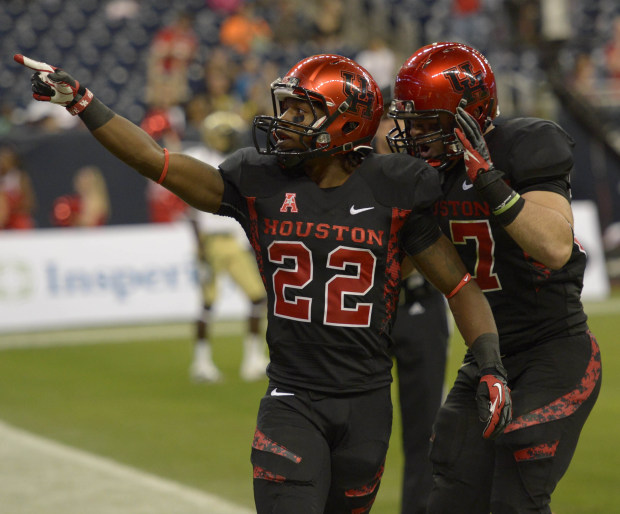 Houston replaced their signature red with orange on a black uniform for a 2013 game to get in the Halloween spirit.