With Veterans Day just around the corner, the college football world will once again see a good handful of schools suit up in alternate uniforms designed to be a military tribute to one degree or another. This has become a trend that seems to happen twice a season, with the first coming around September 11, which we reviewed in detail last season. While some teams will mix in a bit of the stars and stripes in their helmets, at least one school will be going with a full alternate look this week.

Earlier this week Miami showed off their specially designed look for their military appreciation day against Virginia. The uniforms, designed by Adidas are said to honor the U.S. military, but it is pretty clear the look itself is nothing but a BFBS (“Black for black’s sake”) uniform design. Sure, there is some camouflage underneath the jersey and uniform people will actually see, but the uniform design itself shows no clearly identifiable nods to the military and displays no patriotic symbols. Reading through the details of the uniform, embroidered stripes pay tribute to the insignia found on elite forces uniforms, but you have to look pretty closely to see this detail.

To me, it just seems as though Miami and Adidas are using Veterans Day as a lame excuse to roll out an alternate black uniform. The good news is Miami will donate game-worn jerseys and helmets to be auctioned off to benefit the Miami VA Healthcare System. So at least these uniforms will serve a good purpose in the end, and that is the way all schools should treat their special military appreciation uniforms.

In the Pac-12, UCLA will add the stars and stripes to the UCLA logo on the helmet, which we shared yesterday. The rest of the road uniform will be unchanged, although the Bruins will wear a camouflage base layer underneath the jersey. Like Miami, UCLA will auction off some of these helmets to raise money for helping homeless veterans in the Los Angeles community. The helmet itself seems simple and well done.

Are you ready for our 34th annual Salute to Veterans and Armed Forces game? This Saturday in Floyd at 2:30 PM. pic.twitter.com/BAvB7nBZ4l

I really like the helmet SMU will be wearing tonight against Temple. The Mustangs will wear a fire engine chrome red helmet with the mustang logo filled in with a stars and stripes pattern. That is a solid look. What I think would be cool would be if offense could wear red helmets, defense could wear blue helmets and special teams could wear white helmets. There is probably an NCAA rule against that, but that would be the ultimate patriotic tribute for any school with red, white and blue in their color scheme.

Some more stars and stripes helmets from the FCS…

Eastern Washington will be taking the stars and stripes to the jersey in addition to the helmet. This is not something I am particularly fond of, as I feel wearing the flag in a physical game like this, where a jersey is prone to getting dirty or perhaps ripped is more of a sign of disrespect to the flag and that for which it stands. For some reason this does not bother me on a helmet, but it does on a jersey. Perhaps that is just me.

As a reminder, no military appreciation uniform will look better than these… 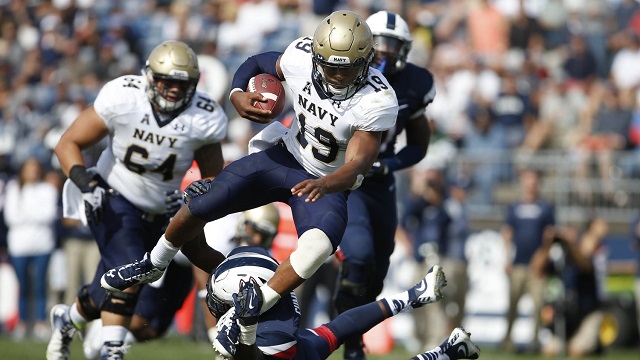 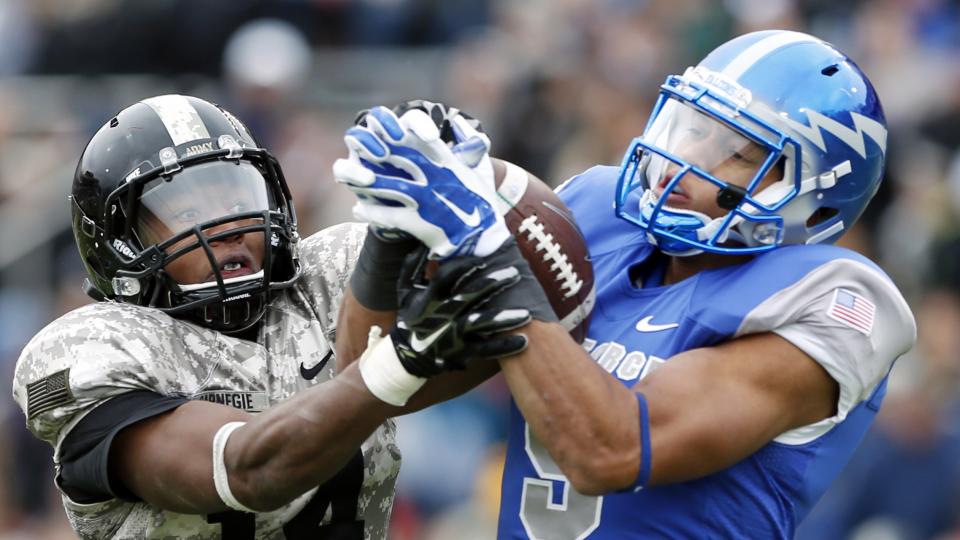 I want to make sure to point out a couple of uniform notes I saw cross my path this week. Colorado has unveiled some really sharp uniforms this season, but in light of the recent 30 for 30 film on the Colorado football program, Buffs head coach Mike MacIntyre announced Colorado will wear their classic, signature look this weekend against Stanford.

Over the last couple of years I have been hard on programs like Duke and North Carolina for mixing in alternate black uniforms or helmets or other uniform elements to their uniforms. As a reminder, I am always against teams adding black when it is not an official school color, and Duke and UNC have each violated that uniform code time and time again. So imagine the joy in my eyes seeing this tweet from the ACC announcing both rivals will wear their traditional look for what will be a huge game in the ACC Coastal Division.