Would you believe we’re going on about three years since an NFL team poached a college coach, and that was the Houston Texans with Bill O’Brien, whom no one thought was too long for the college game as it is?

The argument probably goes along with the fact that recently, the collegiate ranks haven’t really been a gold mine of untapped talent waiting to be plucked by the NFL. In fact, since the 2012 off season, only three college coaches have gotten the NFL call … O’Brien, Chip Kelly (on his second team) and Greg Schiano.

At any rate, and in spite of the recent success rate of these fellows, maybe the NFL is going to dip into the college ranks this season once the bloodletting begins. With sagging ratings for once and hideously bad quarterback play across the league for the most part, it’s reasonable to suggest that since the college quarterbacks aren’t working out all that well recently, maybe the college minds who made them successful can help that.

If NFL teams do come calling, these are the most likely candidates (in order of such likelihood) to leave if they get a ring.

Coach Shaw’s name appears on lists like this all the time, mostly because it’s intellectually easy to look at the offense and defense Stanford runs and say, “oh, he does that NFL pro-style offense stuff” whatever that means anymore. Which makes part of this column intellectually easy, I suppose. But Shaw is still very young in the coaching profession and it’s hard to think at some point he doesn’t get the itch to try something else. The “one coach, one place” narrative is antiquated, even though it’s awesome when it happens.

Shaw seems to love Palo Alto, so any college move in his mind would be a lateral or downward  movement. The NFL feasibly could entice him, having already 9 years as an NFL assistant in his past. But Stanford is his blood type and has been since he was a player, so maybe he can awesomely be one of those one-coach, one-school guys. 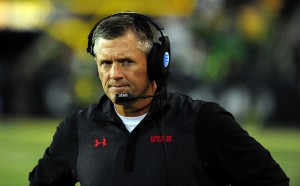 Only one of a handful of college head coaches with any NFL experience, Whittingham played for the Los Angeles Rams in 1987 as a replacement player during the NFL strike. Though his name won’t start rattling the bones of dormant fans, Utah has been extremely solid in his time there, including a 9-1 record in bowl games, indicating that when he gets time to really plan for a game, his teams will be motivated and out-scheme. One drawback is that he lacks any NFL coaching background, but, again, if what’s going on right now isn’t working for your NFL team … 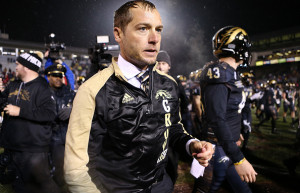 Row the Boat to the NFL? Not likely, but there’s clearly a reason that Fleck has continued to pass up jobs. The purist in me wants to believe it’s because it doesn’t make sense to leave a great, get-whatever-you-want situation, let alone one where you’re unbeaten this year and can be remembered forever, forever by winning the Cotton Bowl. Maybe Fleck would be enticed by an NFL offer? He spent three years in the league with the 49ers, though only playing in one game. Still, the guy once named by then Niners coach Dennis Erickson as a “frickin warrior” did leave a post at Northern Illinois to coach wide receivers for the Tampa Bay Buccaneers. It’s not unthinkable. 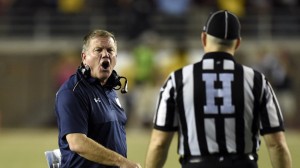 Remember, this is a list of who is mostly likely to go pending a real call. There’s nuance here. Kelly has been a name bandied about for the last several years when NFL jobs come open, and though it’s always denied, surely he’s gotten a few overtures. The difference this year is that ND apparently advocates him having wandering eyes. Though his star isn’t the shiniest it’s ever been, might he take the leap before more acrimony happens in South Bend? The only caveat is that you don’t see guys like Bill Belichick, Mike Tomlin, Pete Carroll, etc. just screaming the tar out of players, and that’s because grown men taking millions to play a game don’t do all that noise. He’d have to adjust in that manner. 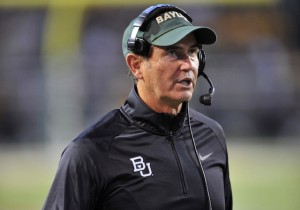 If anyone may move to an NFL job, it might be Briles to a coordinator position. If you think about it, it’s common sense in a way. Briles can play the “I didn’t know …” card and people tend not to care. You never hear John Harbaugh get called out for losing control of the program when a Raven gets arrested (example, mostly because I’m a Patriots fan). Fans of the NFL expect grown adults making millions to act as such, not have a coach babysit them. And the NFL is in need of an infusion of people who can get quarterbacks to be successful. Briles seems too toxic right now for any college job until he gets some clean, drama free years under his feet. The NFL is pretty much a full tonic for that.