The Student Section is a college sports blog, but it was impossible to avoid noticing the sports world’s reaction to “Germany 7, Brazil 1,” on Tuesday afternoon and evening.

Perspective on the unfathomable World Cup semifinal result poured in from people who follow soccer both avidly and for a living. This tweet was hardly an isolated or rare one as the smartest precincts of Twitter weighed in on Brazil’s national tragedy. (Yes, that’s how the event is being viewed in the country.)

The coach of the Brazilian team, Luiz Felipe Scolari, matter-of-factly said, “It is the worst day of my life.” He’s 65 years old, not a 39-year-old wonderboy coach with most of his life in front of him. This morning, with the events in Belo Horizonte, Brazil, not even 24 hours old, Germany’s “touchdown” is still very hard to put into words for many soccer commentators.

The Student Section won’t claim to say that any of college football’s most surprising “never-saw-THIS-coming” blowouts can even come close to “Germany 7, Brazil 1.” We know that the way soccer is treated in Brazil gives yesterday’s event a level of shock value that will always stand apart.

Here, though, is our humble attempt to give you the top-10 list of college football’s most breathtaking blowouts. Not all of them appear in the postseason, because great teams often demonstrate their greatness in bowl games. For instance, “Nebraska 62, Florida 24” in the 1996 Fiesta Bowl was merely the final confirmation of the quality of the 1995 Nebraska team, which — for many college football fans under 40 years old — is the best team ever witnessed. Was the 38-point win over a great Florida team surprising? Yes… but 1995 Nebraska was capable of amazing feats anytime it took the field.

If you want 10 truly remarkable blowouts with a very high “What the heck just happened out there?” quotient, here is one person’s list. Feel free to have at it in the comments section to continue this conversation and submit your own choices: 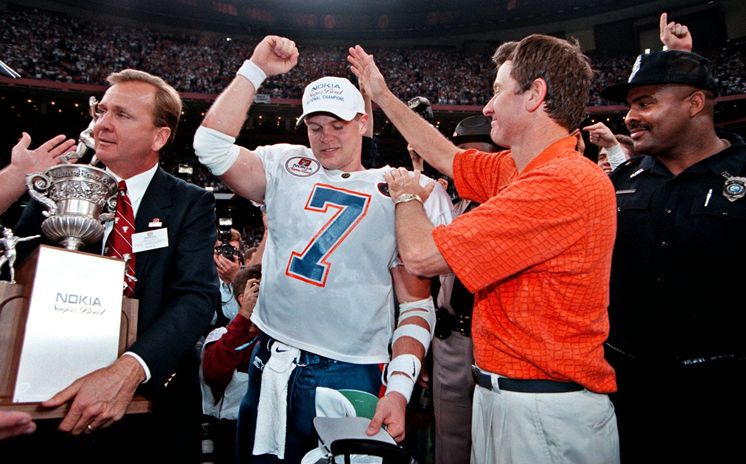 Danny Wuerffel threw for 306 yards and 3 TDs in Florida’s Sugar Bowl upset of No. 1 Florida State. The Gators wanted revenge after losing just over a month earlier to the Seminoles, and they got their chance thanks to Texas’s upset of Nebraska in the inaugural Big 12 Championship Game. Nobody, however, could have imagined that Florida would score over 50 points and pull away from an opponent that had been such a persistent — and effective — nemesis over the past several years.

The No. 1-ranked Seminoles were the obvious favorite in this game, having defeated the Gators, 24-21, at the end of the regular season. What was especially memorable about that late-November victory for Florida State was its ability to relentlessly pressure and hit Florida quarterback Danny Wuerffel, whose aches and pains were visible to everyone inside Doak-Campbell Stadium by game’s end.

However, Florida got the upper hand in the rematch. Coach Steve Spurrier used a shotgun formation and made other tweaks to the Gators’ offense. Florida also enjoyed the benefits of a fast indoor surface at the Superdome. Wuerffel, who was comfortable throughout the night, torched the normally stout FSU defense for 306 yards and 3 TDs en route to a 32-point victory that simply wasn’t expected. The possibility of Florida gaining revenge? Sure.

Not by 32 points, and not by — as Spurrier would say — “hanging half-a-hundred” on his career-long nemesis from Tallahassee.

No one gave the Wildcats – who’d lost to Marshall, Texas, and Oklahoma State – much of a chance against the top-ranked Sooners. However, thanks to a 235-yard effort by running back Darren Sproles and a 4-TD performance by quarterback Ell Roberson, the Wildcats destroyed Oklahoma to capture the conference championship.

Ironically, the loss did not knock Bob Stoops’ team out of the BCS title game. Yet, the 2003 Sooners were being hailed as one of the greatest teams of all time heading into this game. The mere possibility of losing by even one or two points seemed incredibly remote. Losing by 28? There has never been a more surprising result – not just in terms of the winner, but also the point spread – in a conference championship game.

This contest looked like a close game on paper. Sure, Army was the No. 1 team in the country at the time, but 8-2 Notre Dame had to like its chances. After all, the Fighting Irish whipped the Cadets 26-0 the year before, and hadn’t lost to them since 1931. However, thanks to outstanding performances from Doug Kenna and Doc Blanchard, Army handed Notre Dame the worst loss in its storied history. Only the 1985 loss to Miami (58-7) rivals this game in terms of Notre Dame’s most forgettable football moments. 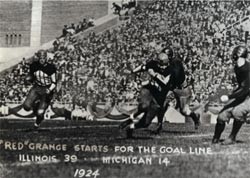 In a performance both stunning and transformational, Red Grange cemented his legend while also making college football come alive for many Americans at a relatively early point in the sport’s existence.

Even though the Illini finished the 1923 campaign with an unblemished record, they came into this game as an underdog. After all, the Wolverines were the defending national champions, and carried a 20-game unbeaten streak. None of that mattered after the opening kickoff, however, as Red Grange scored 4 touchdowns in the opening stanza to give Illinois a commanding lead it would never relinquish. Few games in the 1920s did more to increase the national popularity of college football than this one; it made Red Grange a superstar and accelerated the development of college football at the same time that a man named Knute Rockne was working magic at Notre Dame.

Billed as another “Game of the Century,” no one expected this matchup of heavyweights to turn out this way. Although USC was the No. 1 team in the land, the Sooners entered the contest as a one-point favorite. After surrendering an early 7-0 lead, the Trojans broke the game open by halftime thanks to 4 TD passes by Matt Leinart.

As was the case in “Germany 7, Brazil 1,” the floodgates opened after the game’s first crucial and backbreaking mistake. In “Germany 7, Brazil 1,” the Germans exploited Brazil’s sense of utter panic after managing to get a quick first goal. In “USC 55, Oklahoma 19,” a muffed punt by Oklahoma’s Mark Bradley deep in his team’s own territory seemed to similarly spook the Sooners, who were never the same team after that moment. USC went for the jugular against a rattled opponent, humiliating one of Bob Stoops’ best collections of athletes at Oklahoma.

Anyone who expected this game to be a blowout would have had it going the other way. The Longhorns, led by all-world running back Ricky Williams, were the No. 11 team in the nation, while the Bruins had dropped their first two games of the season. None of that mattered after the opening kickoff, though, as Cade McNown guided UCLA to touchdowns on its first six possessions, putting this one on ice by halftime.

If Texas head coach John Mackovic lost his hold on power in Austin after winning conference championships in each of his previous two seasons, this was the moment it happened. A fellow named Mack Brown would ride to the rescue one season later, and the course of Texas football would be forever altered.

This one was a bigger shocker than people realize.

After all, Urban Meyer had to lobby very hard just to get in this game over Michigan, whose lone blemish was a 3-point loss to the Buckeyes. However, the Gators – who lost by 10 to Auburn – left no doubt about who the better team was, limiting Ohio State to just 82 yards of total offense.

Florida did not bring a turbo-charged offense into this game. Chris Leak was, on balance, a game manager and not the Danny Wuerffel or Rex Grossman kind of quarterback Gator fans had hoped for when his collegiate career took shape. However, Leak was precise and on target in this game, and his teammates joined him in creating a virtually flawless performance after an opening kickoff return for a touchdown by Ohio State’s Ted Ginn.

That kickoff return by Ginn makes this result even more shocking. Florida figured to have a tough time keeping up with Ohio State’s offense if the Buckeyes gained any rhythm at all. For OSU to get seven points from special teams before its offense even took the field only seemed to suggest that a long night was ahead for Florida.

Instead, the long night belonged to the Buckeyes, and Leak – often maligned during his career in Gainesville – walked off the field in Glendale, Arizona, as a national champion.

On paper, this was a complete mismatch. BC was the No. 1 team in the country, while Holy Cross was a mere 4-4-1. Inexplicably, the Crusader offense moved the ball virtually at will against a stout Eagle defense that had allowed just 39 points (!!!) all season. 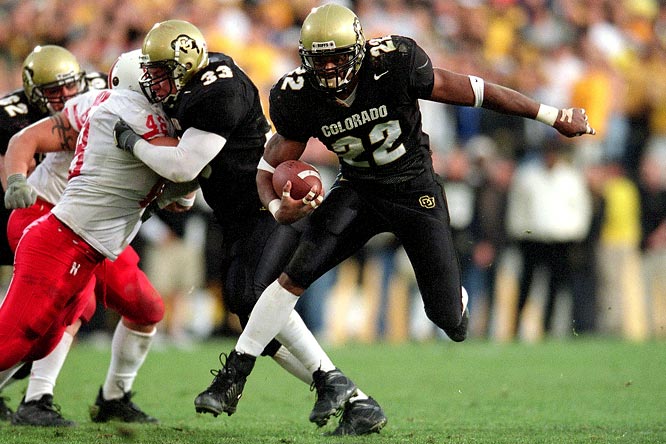 When Bill Callahan came to Nebraska as head coach midway through the first decade of the new century, Nebraska’s defense regularly surrendered video-game point totals. When Colorado posted 62 against Nebraska on Thanksgiving weekend in 2001, the result was hard to put into words… much like “Germany 7, Brazil 1.”

I’ve never been able to figure this one out. Neither could Frank Solich or the rest of Nebraska’s befuddled coaches.

Coming into this game, the Huskers’ vaunted Blackshirt defense was one of the top units the nation. On paper, there was simply no way the Buffaloes, who were blown out by Texas, should have been able to move the ball. However, Colorado’s offensive line manhandled the Cornhusker front seven, paving the way for a 380-yard effort and giving the Buffaloes the Big 12 North Division championship for the first time.

Some things defy explanation, and this is one of them. The Bruins were 2-0, ranked 11th in the country, while the Utes – still a mid-major at the time – were 0-2 and playing without two key players: star quarterback Brian Johnson and running back Matt Asiata. Thanks to an opportunistic defense, which forced 5 turnovers, and a career-best 246-yard, 3-TD performance by fill-in quarterback Tommy Grady, Utah pulled off the blowout upset.

Remember that Utah didn’t max out in 2007. The Utes’ best season – the 2008 run to an unbeaten season and a Sugar Bowl thumping of Alabama in New Orleans – didn’t come until a year later.