People have talked for years about the fact the Super Bowl is sort of an extra national holiday in the United States. But if that were really the case, we could indulge just a little bit more at our roman numeraled parties on the first Sunday of February each year. Instead, Americans cost their companies nearly $1 billion in productivity and take a combined 1.5 million sick days on the day after the Super Bowl.

It's that dual hangover — one from the end of football, the other from alcoholic beverages — that really does us in.

So if most of us are phoning it in anyway, why not give us one more national holiday? Well, the internet makes everything easier. On Thursday, someone in Durham, N.C., launched an electronic petition with the White House's fairly new online petitioning system requesting that the Obama administration consider making that day a national holiday. At the end of Day 1, it had about 2,500 "signatures."

When this new system was created by the White House in 2011, you only required 5,000 signatures to get an official response from the government. Now, though, they've raised that plateau to 100,000. That means this thing has to make some serious progress before it expires on Feb. 23.

Then again, considering that the United States already has two national holidays within two weeks of the Super Bowl, I'd have to imagine the answer will be short, starting with 'N' and ending in 'O.'

In other arbitrary Super Bowl news, the starting lineup for the Puppy Bowl has been released and whoever picked Baltimore for their prop bet on which Superdome end zone would be painted first is off to a good start… 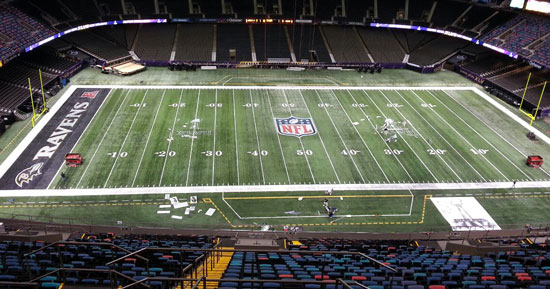 Hang in there, people. Only nine days to go.