The National Football League’s 2014 regular season came to an end Sunday. While many teams celebrated playoff berths, division titles and first round byes, a handful of other teams just wanted to walk away from what was a very disappointing season. Here were the league’s five biggest disappointments in 2014:

After a 7-9 finish in 2013 in which the Titans lost a number of close games, the team from Nashville entered the 2014 campaign with a good deal of optimism. Instead, Tennessee started three different quarterbacks, ranked 29th in the NFL offensively and dropped their final nine games. Defensively, the Titans ranked just 31st against the run. Tennessee suffered three losses to teams with four wins or fewer.

After a trip to the divisional round of the playoffs last season, the New Orleans Saints needed just to finish .500 to win the NFL’s worst division in 2014, but finished 7-9 for the second time in three seasons. Quarterback Drew Brees led the league in passing yards for the fifth time in his career, but the Saints’ defense ranked just 31st in the NFL.

Bears’ head coach Marc Trestman said he would like to stay to coach the team in 2015, but most agree that a change at quarterback is inevitable. Despite being surrounded by talent with Matt Forte at running back, Martellus Bennett at tight end and physical receivers in Brandon Marshall and Alshon Jeffery, Jay Cutler threw 18 interceptions and fumbled nine times. The Chicago defense wasn’t much better, ranking just 31st against the pass. The Bears failed to beat a team with a winning record and dropped their final five games to finish with their worst record in a decade. 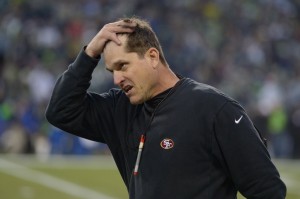 After appearances in the Super Bowl and NFC Championship, many believed that 2014 may be the season that Jim Harbaugh and the San Francisco 49ers hoisted a sixth Lombardi Trophy. This season however, Colin Kaepernick took a huge step back, posting his lowest quarterback rating as a starter. Harbaugh was followed by speculation as to where he would coach next season due to his disgruntlement with 49er management. The defense remained very good for San Francisco, but the offense was held to 20 points or fewer 10 times.

Fortunately for Jets’ fans, the team wasted no time shattering their high expectations entering the season. After an 8-8 finish in 2013, a playoff spot appeared possible for New York entering the season, but New York reclaimed its rightful spot as the league’s biggest train wreck. Quarterback Geno Smith took a huge step back in his second season in the league, finishing with fifth worst passer rating in the league as the Jets finished dead last in passing yards. After a 2-11 start, the Jets won two of their final three games to lose out on a top 5 pick. As usual, speculation has already begun as to whether or not head coach Rex Ryan will return next season.