The 2014 National Football League regular season is over with the playoff field of 12 set. As is the case every year, a number of teams failed to live up to lofty expectations. Others however, turned out to be pleasant surprises. Here is a look at the league’s five biggest surprises for 2014:

The 2014 season ended in typical Cleveland Brown fashion as the Browns lost their final five games. Staying relevant in the playoff race into the month of December however, is an obvious step in the right direction. The 7-9 finish is the best for Cleveland since the Browns went 10-6 in 2007. The Browns won seven games with inconsistent play at quarterback and without explosive receiver Josh Gordon for much of the year. For the first time in a long time, fans in Cleveland can be optimistic about the future.

The fact that the Arizona Cardinals won 11 games isn’t as surprising as how they won them. After finishing 10-6 last season, the Cardinals made the playoffs for the first time since 2009 with three different starting quarterbacks, a non-existent running game and a pass defense that ranked just 30th in the NFL. Bruce Arians deserves a ton of credit for getting Arizona to the playoffs while competing in one of football’s best divisions. 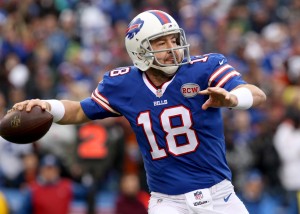 Thanks to a 17-9 win over New England on Sunday, the Buffalo Bills finished with a winning record for the first time since 2004. Buffalo struggled offensively in 2014 even with Kyle Orton replacing second-year man E.J. Manuel, but the Buffalo defense was one of the best in the NFL. The defensive line of Jerry Hughes, Mario and Kyle Williams and Marcell Dareus was arguably the best in the NFL as Buffalo notched a league-high 50 sacks. Next season, the Bills will get last season’s PFWA Defensive Rookie of the Year, Kiko Alonso, back from injury.

In one year’s time, the Houston Texans went from a team with the worst record in the NFL to a team with a winning record. Led by arguably the NFL’s best defensive player in J.J. Watt, the Texans finished the season strong by winning five of their final seven games. DeAndre Hopkins and Andre Johnson look to be one of the league’s most formidable receiving duos in the years to come while Arian Foster rushed for over 1,200 yards. After two wins last season, the playoffs may be a reality for Houston in 2015.

A team many picked to finish last in the NFC East at the outset of the season, the Dallas Cowboys won 12 games, clinched their first division title since 2007 and finished a perfect 8-0 on the road. The passing combination of Tony Romo to Dez Bryant remained lethal while running back DeMarco Murray emerged as a MVP candidate, leading the league with a team-record 1,845 yards rushing — not bad for a franchise that’s had both Emmitt Smith and Tony Dorsett. The biggest surprise was the Dallas defense which held eight of its 16 opponents below 20 points.