Defining a catch is easy on the most simple, fundamental level.

As a kid after many failed attempts that may have ended in a face plant or a ball to the nose, you placed two hands around a football that was spiraling in your direction (or if you had my father, it was wobbling and heading toward a parked vehicle).

That was a catch, and you knew it even at a young age because the ball stopped. It was in your hands, and only your hands. It was thrown in your general direction and now only you had possession.

I tried to get through a re-telling of Americana and childhood nostalgia without using a football buzzword, and failed miserably. To have “possession” you must first have “control”. Fair enough, but when you were eight years old making a “football move” wasn’t much of a concern.

Your father didn’t have to consult the modern NFL rulebook while assessing your first catch. That would be really weird and maniacal (though a decent Saturday Night Live sketch?), and it would also result in a lot of heartbreak. Your father also likely wasn’t Gene Steratore.

If you’re from Detroit or play for the Lions, the ruling that erased a spectacular Dez Bryant catch on 4th-and-2 during an eventual Green Bay Packers divisional-round win was poetic justice for the botched pass interference penalty last week. But if you belong to the vast Cowboys Nation or are simply not a fan of rampant confusion, you’re frustration is understandable.

Let’s step back a moment to recap the events which led to today’s edition of the NFL rulebook, and its wheel of injustice.

The Cowboys’ late fourth-quarter drive had stalled on Green Bay’s 32-yard line. Needing two yards on fourth down, Cowboys head coach Jason Garrett decided to go for it, which was the correct decision. The play he then called showed he’s in possession of rather large grapefruits.

Shoving all his chips onto the green zero and then letting the roulette ball bounce, Garrett went straight vertical with Bryant targeted deep. His top receiver was then asked to make a leaping catch over Packers cornerback Sam Shields.

And making catches over pretty much anyone is what Dez Bryant does. 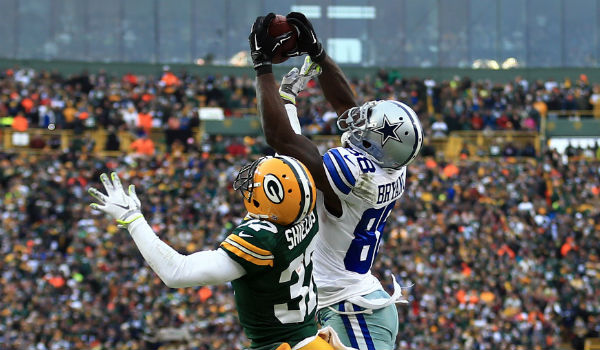 That was spectacular, as was Bryant’s ability to secure the ball while coming to the ground. Shields wasn’t at fault because he couldn’t have possibly had better coverage. He attempted to wrestle the ball away from Bryant as the receiver descended back to earth, but failed.

Bryant clutched it with two hands, just as you did as a wee child. Then he took two steps and fell to the ground while reaching for the end zone. Which is when we arrive at the confusion and problem. 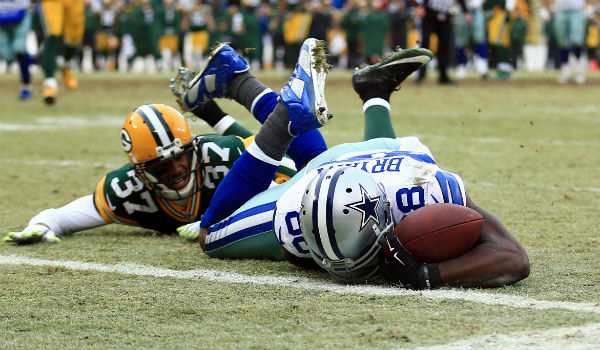 The ball came out when Bryant hit the ground. The play was still ruled a catch on the field, with Dallas ready to set up at the one-yard line. They were only that single yard away from taking the lead, and potentially minutes away from advancing to the NFC Championship.

Then a flag flew, and once more our definition of what does and doesn’t constitute a legal catch was challenged. It came from Packers head coach Mike McCarthy, who didn’t believe Bryant made a football move and/or maintained possession throughout the entire process of the catch.

Unfortunately, he’s right, and Steratore was correct with his reversal to call the pass incomplete.

There’s a lot of fiery rage being directed toward Steratore, partly because hating referees has been deeply embedded in the sporting culture since the first lion vs. human match in ancient Rome (assuming that was officiated in some way).

However, the infamous Calvin Johnson rule—which actually originated years earlier with the Bert Emanuel debacle—says the reversal decision was correct.

Here the letter of the law on a catch. Rule was properly enforced: pic.twitter.com/j5w0R96Q9f

That’s true only if you follow the most literal definition of the rule, which is the task of every official. Referees are instructed to know and enforce the rulebook. They’re not paid to have an opinion on said rulebook.

The problem then is with the rule,  and not the enforcement of it.

As written the rule works only if all instances of going to the ground while making a catch are similar. Many are, or course, with a receiver stretching and diving, and then crashing to the ground. If he maintains possession throughout that entire process, the receiver has done something that’s both awesome and legally defined as a catch.

But increasingly there are instances of going to the ground which look much different. The modern mammoth and athletic receiver can leap to catch the ball at its highest point, as Bryant did. Then often a receiver will come down with two feet before continuing to fall.

Where, exactly, does the process end there? The rulebook says it ends on the ground, and so does NFL Vice President of Officiating Dean Blandino.

Bryant going to the ground. By rule he must hold onto it throughout entire process of contacting the ground. He didn’t so it is incomplete. — Dean Blandino (@DeanBlandino) January 11, 2015

And, of course, Steratore himself agrees.

The “going to the ground” principle’s significant flaw is when there’s an act ahead of the fall, like the aforementioned two feet Bryant (and many others) plant before their forward momentum continues. Possession of the ball and those two feet—or in Bryant’s case specifically, two steps forward along with a reach for the goal line—should override whatever comes next.

The receiver is in the field of play and has successfully controlled the ball. Like many NFL rules, this one attempts to make a general ruling on a situation that has many different play-specific variables. Which is why the rule is awful.

But as grimy as the ruling was, a game still doesn’t turn on a single call. That was true last week with the pass interference flag that was picked up, and it’s still true now.

After the reversal four minutes still remained and the Cowboys had two timeouts. They had to stop an offense led by a severely limited Aaron Rodgers due to his calf injury. They failed, continuing a second half of stumbling in which the Cowboys were outscored 16-7.

An opportunity for redemption and a reversal of fortune is always a drive or play away as numerous one-on-one battles rage on. It would just be nice if we could properly define one of the most basic plays: a catch.

Hello there! This is starting out poorly because I already used an exclamation point. What would you like to know about me? I once worked at a mushroom farm, which is sort of different I guess (don't eat mushrooms). I'm pretty wild too, and at a New Year's Eve party years ago I double-dipped a chip. Oh, and I write about football here and in a few other places around the Internet, something I did previously as the NFL features writer and editor at The Score. Let's be friends.