Regardless of why you think Colin Kaepernick remains unemployed — and it’s becoming harder to believe that his extended experience as a free agent has everything to do with football and nothing to do with politics — we’ll probably eventually reach a point at which public pressure boils over and somebody gives in and signs him.

That team will be looking for help at the quarterback position, but they might also be looking to curry favor from fans, many of whom support the polarizing quarterback. Remember, Kaepernick’s jersey sales skyrocketed after he began protesting the national anthem last year.

With organized team activities getting underway and injuries inevitably following, here’s a breakdown of potential landing spots for Kaepernick this spring/summer.

1. Seattle Seahawks: I mean, they always made a ton of sense. They’re very familiar with Kaep from their many battles with San Francisco in the NFC West and as a mobile quarterback, he’d fit right in as Russell Wilson’s backup. Plus, Pete Carroll is cool beans and Seahawks owner/Microsoft co-founder Paul Allen doesn’t strike me as a staunch conservative (he contributed to Hillary Clinton’s 2008 campaign for president). Do we really think this guy would object? The team, the city and the owner would all seemingly embrace Kaepernick, which might explain this…

2. New York Jets: This just makes sense because the Jets have three crappy quarterbacks and I don’t think the team or Kaepernick would take too much heat in a place like New York. But Donald Trump, who has been critical of Kaepernick, recently selected Jets owner Woody Johnson to be the next U.S. ambassador to the United Kingdom. 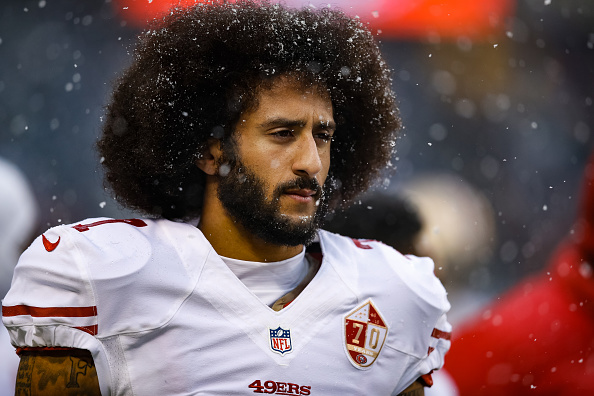 3. Buffalo Bills: Nobody’s safe under new general manager Brandon Beane, who has declared an open competition at the quarterback position. What if Beane and his desperate colleagues aren’t satisfied with incumbent starter Tyrod Taylor or any of Taylor’s challengers? Kaepernick is certainly similar to Taylor on the field, Buffalo wouldn’t be a bad market and the Pegulas might be willing to embrace him.

4. Oakland Raiders: They’re still the league’s outlaw team and there’s no indication the Davis family has an issue with Kaepernick’s politics. And he would fit right in there in the Bay Area, or even eventually in Las Vegas. But he’d have to be willing to take a long-term backup job.

5. Pittsburgh Steelers: The Rooney family is quite progressive, Ben Roethlisberger might not stick around much longer and they could certainly use an upgrade over Landry Jones in the QB2 spot.

I will, however, throw both Los Angeles teams as well as the Tampa Bay Buccaneers out there as honorable mentions.