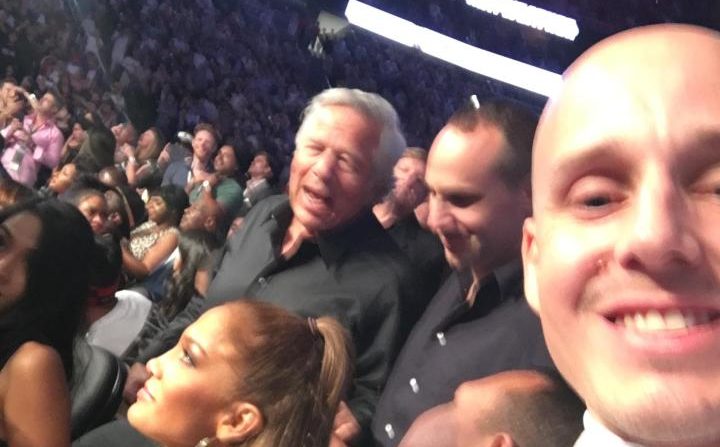 It sounds like the plot of a bad movie, or a great commercial: a nobody pretends to be a somebody long enough to gain access to a celebrity lifestyle they’d never dreamed of attaining.

That’s essentially the lifehack British bartender Oliver Regis pulled off in Las Vegas this weekend at the Mayweather-McGregor fight. According to The Sun, he “blagged” (which is a real word essentially meaning to con your way in, but totally sounds like British slang) all the way to ringside after posing as a member of Floyd’s security detail:

He pretended to be with Floyd Mayweather Jr’s security team and shadowed them past security – who he claims failed to scan his ticket, which would have exposed him.

Oliver, from Stamford, Lincs., then plonked himself down in the third row – right next to the ring during the bout before McGregor’s.

Regis did have a nosebleed seat, but there were plenty of expensive seats still available; that’s what happens when you attempt to charge absurdly high prices for them.

Having made it past the gatekeeper, Regis entered the celebrity zone where people just assume you’re supposed to be there, and therefore you can do whatever you want:

The pint puller told The Sun: “I did feel a bit cheeky – but this was a once-in-a-lifetime chance. I could not believe it worked.

“There were quite a few empty seats.

“I sat down in the third row and Mike Tyson then sat down behind me. LeBron James was on my row and I could see Leonardo DiCaprio.”

Think of how surreal that would be; it’s a hell of a turn for your evening to take. It’s also a prime example of someone being willing to do something I’d never have the confidence (or poor decision-making) to do; my Midwestern sensibilities instruct me to react apologetically even when I’m supposed to be somewhere. My self-preservation sensibilities would also preclude me from asking Mike Tyson for a selfie, but that’s exactly what Oliver did:

Regis would spend much of last Saturday night snapping selfies with the stars around him, admitting that talking to Tyson was especially intimidating.

“It was quite nerve-wracking asking Tyson for a picture,” he said of the retired boxer. “He didn’t say anything – just nodded his head.”

He went on to take pictures with Gerard Butler, Vinnie Jones, Demi Lovato, and others. But, from those pictures, it’s apparent that Oliver isn’t a large man; he appears, in fact, to be quite tiny. How in the world did he pass for security of any kind?

Still, this story is more entertaining than the fight itself. Well played, Oliver Regis.