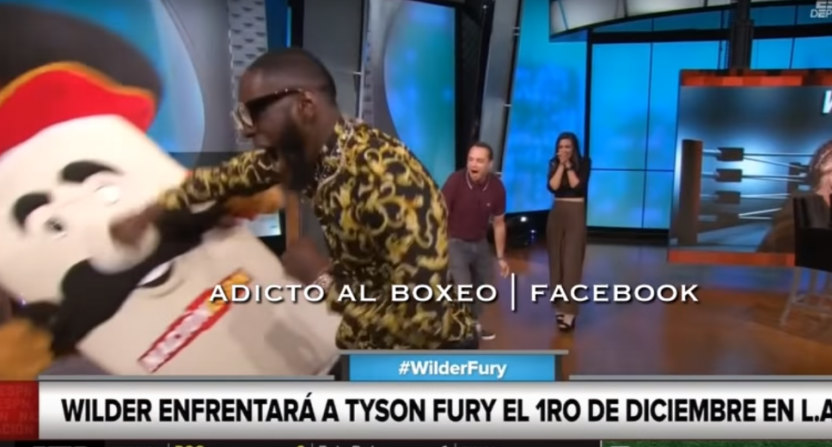 What’s weirder than a boxing champion punching a mascot on live TV? Media outlets apparently just making up that the man in the mascot costume suffered a broken jaw. Earlier this month, reigning WBC heavyweight champion Deontay Wilder went on ESPN Deportes’ Nación ESPN to promote his Dec. 1 fight against Tyson Fury, and part of that segment saw him punching a mascot after the hosts encouraged him to do so. You can see that around the 10:50 mark of the clip below, after Wilder repeatedly punches a dummy that’s supposed to be Fury:

This moment happened at least as early as Oct. 4, as that’s the date the above video was uploaded, but it wasn’t really noticed by the English media immediately. In the last few days, though, this story got real weird. A whole lot of obscure YouTube channels uploaded the part of this clip just with the punch (you can see some of those here), and titled it with variations of “Deontay Wilder breaks mascot’s jaw.” There was some Twitter chatter around this too, some of it claiming that Wilder didn’t know there was a real person was inside the costume. Some of that seems to stem from this video tweeted Oct. 12 by Ed Namrok, which has captions claiming “Deontay Wilder breaks mascot’s jaw not knowing a real person was inside” (which may be from one of those YouTube clips; many of those are similarly captioned):

@BronzeBomber recently appeared on the @ESPN show ‘Nacion’ to promote his upcoming fight against @Tyson_Fury, and part of his appearance included a scene with a giant mascot tortilla in a sombrero. pic.twitter.com/xhctDNOD4T

And this (online betting/content company) 888 Sport tweet of the video on Sept. 13 also claimed a “broken jaw”:

Video of Deontay Wilder punching a mascot on ESPN… without realising there was a real person inside!

The poor guy is currently nursing a broken jaw… 😮pic.twitter.com/RvNkvIMzsF

Another piece that really led to this spreading was Jorge Alonso’s BroBible piece titled “Heavyweight Boxer Deontay Wilder Breaks Mascot’s Jaw After Failing To Realize A Real Person Was Inside,” published on Sept. 13. Here are some of the key bits from that piece:

According to several online reports the man in the mascot costume had his jaw broken by the punch and Wilder is claiming that he didn’t know there was a real person inside the costume.

I’m not entirely sure how Wilder didn’t know there was a real person inside the costume or why the producers would allow this to happen but it’s still hilarious.

There are no citations of those “online reports,” but there are some linked tweets, including two now–deleted ones from ESPN multiplatform journalist Alan Huerta that spawned many of the later replies. However, one of those tweets just said Wilder  “is a straight savage for this” and included a picture or video, and the other one just included a picture or video. Maybe those videos also had the “broken jaw” commentary.

At any rate, “broken jaw” spread far and wide, from Deadline to The Daily Mail to Complex to Maxim to News.com.au to Breitbart to Golf Digest (for some reason!), with some of those also suggesting Wilder didn’t know a person was inside (which, come on). And Wilder himself responded to that latter accusation with an Instagram post Sunday night, calling those headlines “Click Baiting” and apparently screenshotting the BroBible piece (while also apologizing to the guy involved in case he did break his jaw, and offering him a ticket to his fight):

Yea, Anything headlining I didn’t know a “Human Being” was in there is just straight “Click Baiting” like come on now, I guess the Mascot rolled out there. show so respect! I sincerely apologize to the brave man that was injured (if this is true) I have the up most high respect for him, his participation, willingness and courage. If this is true @nacionespn I personally would like to invite him to my Dec.1 fight. Word Is Bond✊🏿 -CHAMP #BombZquad #PeoplesChamp

At any rate, an ESPN spokesperson told The Wrap Sunday that “Reports are inaccurate. No injury was caused to the Mascot performer during the Nación ESPN segment,” and an ESPN report Monday said “Despite initial reports, the man inside the costume was not injured by the punch” (and, you know, they’d probably know). So in the end, this was all a poorly-sourced tale of sound and fury, told by many idiots, and signifying nothing.