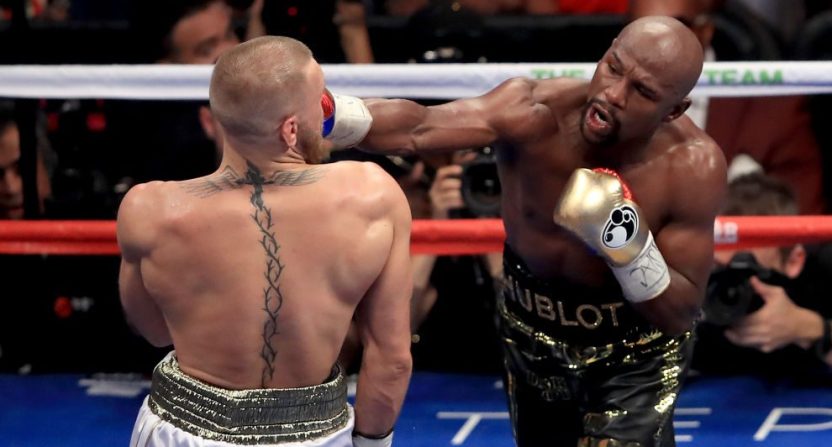 One of the biggest boxing matches in recent memory came when a cross-sport super fight was held between Floyd Mayweather Jr. and Conor McGregor in 2017.

Mayweather was able to use his speed and boxing experience to easily propel him to a 10th-round TKO of McGregor. Over five years later, it appears that the two sides may be working towards a potential rematch.

The legendary boxer discussed the possibility with MailOnline on Wednesday, saying that he is in “final negotiations” with McGregor on a potential rematch in 2023.

“I want to go out there this weekend and have fun [against Mikuru Asakura]. Then I have another exhibition in Dubai in November, and me and Conor McGregor in 2023,” said Floyd Mayweather.

Mayweather did add that he would prefer that the fight took place as an exhibition instead of a professional fight, but he would keep both possibilities open against McGregor.

Both fighters are at very drastically different stages of their careers in their respective sports since last facing off against each other.

Mayweather ultimately retired from professional boxing following the first McGregor fight. As for McGregor, he has gone 1-3 in his last four fights in the Octagon since stepping in the boxing ring, with his most recent fight being a July 10, 2021 loss to Dustin Poirier. He’s also been hinting at a potential retirement from MMA recently.

Regardless, the potential draw from both sides on a rematch certainly makes it seem appealing for both. The first McGregor-Mayweather match brought in 4.3 million buys on pay-per-view, making it the second-biggest event in PPV history in the United States.

But considering where the two are at in their career at this point, it certainly seems like there may be less interest than there was previously for their first fight.

We dont want this https://t.co/WGz4ZW53JL

Have such little desire to see this https://t.co/Ius8mbqeMr

Great, two retired idiots getting 200 million for no effort https://t.co/GoEwk4CRWY

This was awesome the first time. But I now have no interest in this fight. Conor has lost like 3 straight fights. Clearly a play for cash from both of them. https://t.co/iJ2tUGDQFo

Their first fight wasn’t all that competitive, so a rematch between the two very much feels like trying to catch lightning in a bottle for a second time. And that rarely works as fruitfully as the first time.