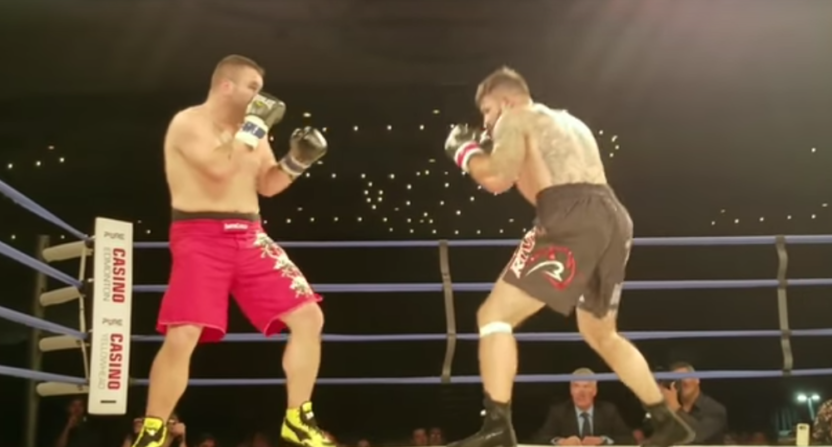 There’s some sad news in the world of combat sports, as 34-year-old fighter Tim Hague (seen at right above) died Sunday after being in critical condition with a cerebral hemorrhage following a knockout from Adam Braidwood in a boxing match in Edmonton Friday. His sister Jackie Neil confirmed Hague’s passing in a Facebook post Sunday:

Hague started his MMA career in King of the Cage Canada in 2006, winning the title there in only his fifth fight, and then went on to the UFC in 2009, featuring on five cards there in 2009, 2010 and 2011. After that, he fought in some regional promotions, then the World Series of Fighting and the Absolute Championship Berkut. He put up a 21-13 mixed martial arts record overall, and was also known for his kindness and his generosity outside of the ring. Hague was an elementary school teacher before taking up MMA, and he made an impression on tons of people he met, which was reflected in the Twitter tributes that poured out to him this weekend. One particularly thoughtful one came from Allison Currie:

There are some questions about promotion safety in the wake of this, though. As ESPN’s Brett Okamoto noted, Hague had suffered four MMA knockouts and two boxing ones in the past 22 months:

And former Olympic boxer Dale Walters, who referees matches in British Columbia, told Global News he would have stopped the Braidwood-Hague fight after Hague took three knockdowns in the first round (a fourth was ruled a slip):

“If I was refereeing that fight, then after three knockdowns, the fight would have been over.”

Walters did say that Hague didn’t seem to be “in that much trouble,” though, making it perhaps somewhat understandable why the fight continued. Video of it is available below:

In any case, the man he fought is certainly controversial. Braidwood, the top pick in the 2006 Canadian Football League draft, used to play for the CFL’s Edmonton Eskimos, but was released in February 2011, months after being charged with kidnapping, sexual assault, aggravated assault and firearms violations. He battled painkiller and cocaine addictions, and later spent two years in jail after being convicted on the sexual assault and firearms violation charges. He’s become quite a successful boxer since getting out; Braidwood had put up an 8-1 record heading into this fight. But as Okamoto noted, that raises more questions about why the sanctioning committee allowed this fight to happen, especially considering Hague’s previous times knocked out and Braidwood’s punching power. As Paige Parsons wrote in the Edmonton Journal, there’s already an investigation going on:

“Following the news that boxer Tim Hague is in critical condition following a professional boxing match on Friday, June 16, we have extended the request for reports to all referees, ringside judges, physicians, chief inspector, paymaster and the presiding inspectors assigned to the bout. We will determine the next steps following the evaluation of these reports,” the statement reads.

We’ll see what comes out of that. Our thoughts are with Hague’s family.