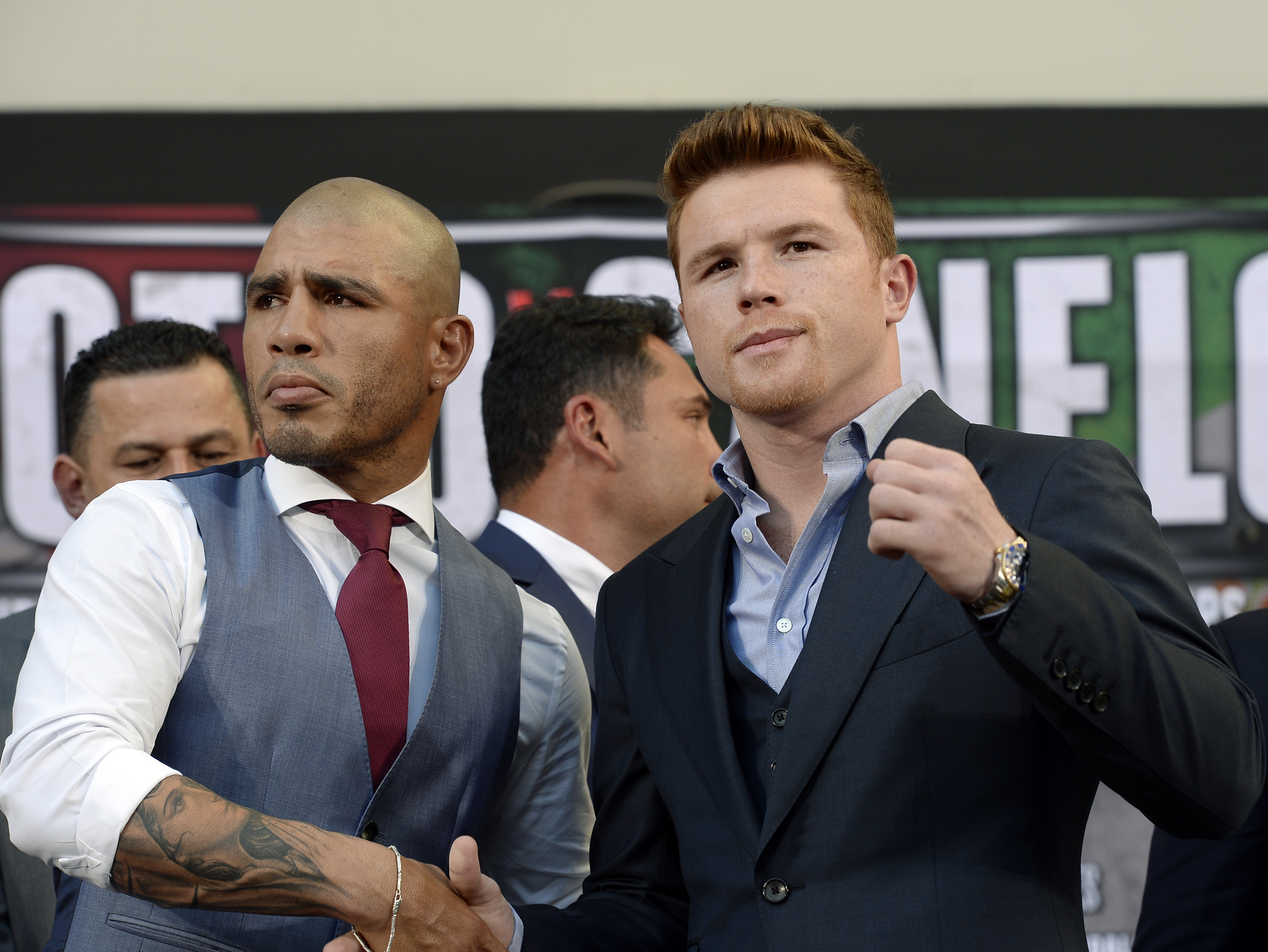 It’s an age-old boxing cycle:  A generation-defining superstar quits or fades, thrusting everyone into a panic about whether the sport can survive without him – especially those in the mainstream media who hover persistently over boxing’s nursing-home bed, eager to declare that it is, at long last, dead.

That kind of panic persists even when the superstar is at his peak. But now, more than any time in nearly a decade, the speculation about who will fill the void is based on something real; Floyd Mayweather is officially retired, maybe for good this time, and Manny Pacquiao might fight just once more.

Which raises the blindingly obvious and natural question, i.e., “Is a red-headed Mexican ready to carry the torch for boxing?”

The red-headed Mexican in question is Saul Alvarez, whose nickname is fittingly “Canelo,” or “Cinnamon,” owing to his rare crimson hair. And this past weekend, HBO re-aired one of his crowning fights for the job of boxing standard-bearer – a pay-per-view win over Miguel Cotto, himself the third brightest shining light of his generation behind Pacquiao and Mayweather.

Canelo has long been on boxing’s “next” list of stars-in-waiting, and arguably he’s been “now” for a while. In May he delivered HBO’s highest televised boxing rating in nine years, and one of his U.S. bouts as far back as two years ago drew a crowd of 40,000, the kind of figure you don’t see very often in America for a live boxing audience.

But does he have what it takes to truly take the mantle?

There are plenty of good reasons Canelo has made it this far, and plenty of ways he can grow into the big shoes he has to fill.

It starts with a Mexican fan base. Hispanics carried boxing in the United States during most of the past decade, led by Oscar De La Hoya and promoter Bob Arum’s knack for tapping that market. Even with signs of larger population groups slowly returning to the sport, the Hispanic market is a powerful one. When Canelo fought Mayweather in 2013, his promoter, Golden Boy, claimed it drew the highest Mexican TV rating ever – nine out of 10 households watched. Having just claimed the scalp of the biggest Puerto Rican star, Cotto, he’s solidified that fan base thanks to a big win in Mexico’s biggest boxing rivalry.

But Canelo couldn’t be where he is just based on that alone. Boxing superstars tend to have a few generous tablespoons of the recipe list for popularity, and an ethnic following is just one of them.

One of the places where Canelo has stood out so far is in his willingness to take on all of the challengers other boxers were wise to avoid. Unlike most other sports with clear-cut central authorities, nobody can force any boxer to compete against anyone else. That makes it all the more glaring when someone goes out of his way to face a boxer who’s unpopular but dangerous. And Canelo has done that multiple times.

Austin Trout and Erislandy Lara, in particular, were both tricky, hard-to-beat stylists who engaged reluctantly so as to minimize contact. Some boxers can get away with that if they have some “other” – for Mayweather, it was his outside the ring “flash” and evidently sublime talent – but neither Trout or Lara had much else going for them.

Yet Canelo took on both, and beat them by judges’ decision, however debatably. And at the tender age of 23, he took on the hardest opponent of them all, Mayweather. That wasn’t quite the same act of bravery, since Mayweather guaranteed him his highest payday to date, but it did demonstrate a record of tackling anything but the easiest jobs – he hasn’t coasted on his fame and an accompanying baseline of making money no matter what.

A third major component of his superstardom is that he does show signs of greatness. He’s already on the Transnational Boxing Rankings Board’s list of 10 best fighters of any weight. By virtue of beating Miguel Cotto, he’s the true (aka lineal) middleweight champion. When HBO was promoting Canelo-Cotto, Max Kellerman kept commenting during a “Face Off” segment that Canelo was not yet “great.” The look on Canelo’s face suggested he didn’t much like it. Watching him take umbrage, you came away convinced that he cared about being a true great – something mandatory for anyone who ever actually gets there.

Sometimes, like a peacetime president, a would-be superstar boxer has few occasions to establish his greatness. Canelo has no shortage of potential opponents against whom he could continue to prove himself and/or sell a crap-ton of tickets: Pacquiao, Timothy Bradley, cult favorite Gennady Golovkin and perhaps even Mayweather if he un-retires.

And finally, he has a certain appeal outside the ring. Part of that appeal is, yeah, he’s damn good-looking. It feels slightly uncomfortable to be typing that kind of thing as a writer in what is a very macho (and, let’s say it, sometimes homophobic) sport, but hey, even heretosexual men can acknowledge those cheekbones, right? Many a sports star, like your Derek Jeters or your David Beckhams, have complemented their natural athletic abilities with being gaudily handsome. Personality-wise, while Canelo is a relatively quiet sort, he does show flashes of a rivetingly brash quality, and he tends to date beautiful women who give him an air of glamour. At one point he was engaged to former Miss Mexico Marisol Gonzalez, and HOMINA HOMINA HOMINA. (<— not overcompensating).

But the forecast isn’t entirely sunny for Canelo’s Morning In America.

His outside-the-ring persona, while it has its commendable aspects, also has its limitations. Four years ago, his promoter, the aforementioned De La Hoya and his Golden Boy company, said that he could speak English, but he was shy. Perhaps he’s still shy. Perhaps, like some Mexican fighters, he makes a virtue out of not speaking English. But he hardly ever speaks English in public, and it is something that could hamper his broader appeal. Even by speaking broken English – perhaps BECAUSE he speaks in a charming, sometimes-amusing broken English – Pacquiao was able to make himself a regular on the Jimmy Kimmel Show. There’s no doubt that appearances like that provided Pacquiao exposure to people who wouldn’t normally watch boxing, and some of those people then tuned into his fights. And look, this guy’s just not that dynamic a charismatic figure. A Grantland profile suggested a certain general spoiled disdain, a kind of emptiness.

Another major ingredient for boxing superstardom is just being sensational to watch in the ring. Canelo certainly has had his moments: His knockout of James Kirkland might be the best of 2015, when all is said and done. But his fight with Cotto was a minor letdown, and most of his fights feature a fair amount of shucking and jiving, punctuated by moments of blistering slugging. He’s not terrible to watch. He’s just not spectacular most of the time, and being spectacular matters a good deal in a sport that’s as much a business as a sport, wherein for a lot of paying customers big knockouts and back-and-forth wars are magnets for their wallets.

View all posts by Tim Starks