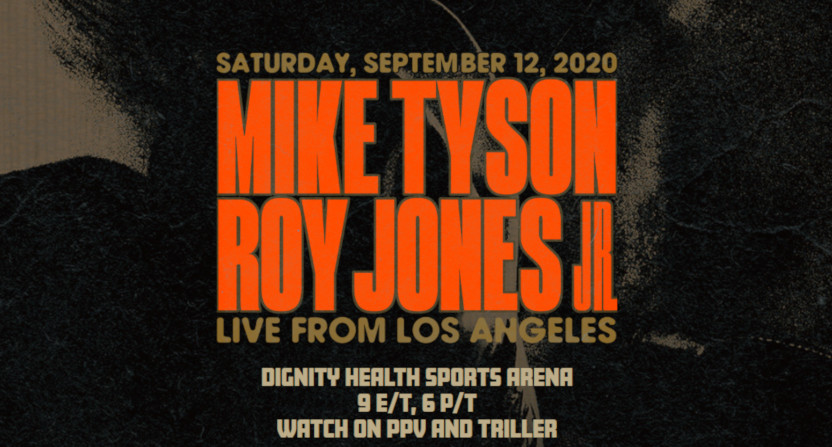 While many planned sports events haven’t happened in 2020, it looks like we’re getting one that few saw coming. Mike Tyson, the 54-year-old former undisputed heavyweight champion, is set to face Roy Jones Jr., the 51-year-old former undisputed lightweight champion and former heavyweight champion, with Kevin Iole of Yahoo Sports reporting Thursday that that fight is set for Sept. 12 at Dignity Health Sports Park in Carson, California (home of the LA Galaxy), and is expected to be eight rounds with larger-than-normal (12 ounce) gloves. Oh, and YouTube star Jake Paul is expected to fight former NBA player (and past Turner Sports “Players Only” analyst) Nate Robinson on the undercard. Here’s more from Iole:

Yahoo Sports has learned from multiple sources that Tyson plans to return to boxing to face Roy Jones Jr. on Sept. 12 at Dignity Health Sports Park in Carson, California.

Andy Foster, the executive director of the California State Athletic Commission, confirmed that Tyson has put a hold on that date.

Foster told Yahoo Sports that he met with Tyson and Jones via Zoom recently and that the fight will be an exhibition.They won’t be wearing headgear, but will be wearing larger than normal gloves. Foster said he believed they’d wear 12 ounce gloves.

“This isn’t a situation where they’re going out there to try to take each other’s heads off,” Foster told Yahoo Sports. “They’re just going to be in there moving around the ring and letting fans see these legends.”

Jones’ last professional fight was a unanimous win over Scott Sigmon in a cruiserweight bout on Feb. 12, 2018. Tyson’s last professional fight was 15 years ago against Kevin McBride, who beat him by technical knockout ahead of the seventh round. Tyson has been posting training videos and talking up a comeback lately, so this isn’t entirely unexpected, but it’s still a little surprising to see. Here’s Tyson’s tweet on this:

What’s that “Legends Only League”? Well, Tyson put out more on it on Instagram:

Introducing my new venture. Legends Only League, bringing back legends of all sports. @legendsonlyleague Link in bio.

That Legends Only League page has more info on this fight, including that it will be “on pay-per-view and Triller.” What is Triller? Well, its site describes it as “an entertainment platform built for creators,” and many have compared it to TikTok (a comparison it’s trying hard to push). And as per Tom Tapp at Deadline, this will also come with a pre-fight docuseries on Triller, and Triller will carry all future boxing events from this “Legends Only League”:

The exhibition will take place on September 12, 2020 at 9:00pm ET on pay-per-view as well as on multi-media platform, Triller, which Relativity Media founder Ryan Kavanaugh helped fund. Triller has also obtained exclusive streaming rights to the soon-to-be-released, ten-part docuseries featuring behind-the-scenes, pre-fight footage. Two episodes will be released each week leading up to the match.

A three-hour live event, the Tyson vs. Jones fight is set for eight rounds and will be part of a multiple fight card. The program will also include significant undercard matches as well as musical performances to be announced in the coming weeks.

The fight, titled “Frontline Battle,” is the first event of a series produced under Mike Tyson’s Legends Only League, a sports venture owned by Tyson and founding STX president Sophie Watts’ Eros Innovations. The venture has partnered with Triller on all future boxing events. As part of their deal with the Legends Only League and Mike Tyson, all rights for the “Frontline Battle” are controlled by Triller. Halogen Networks, which was recently acquired by Triller, will power the streaming version of the PPV and other live streaming components of the event.

We’ll see how this fight goes, and what else comes from this Legends Only League. But Tyson has certainly helped bring some sports attention to Triller with this move.