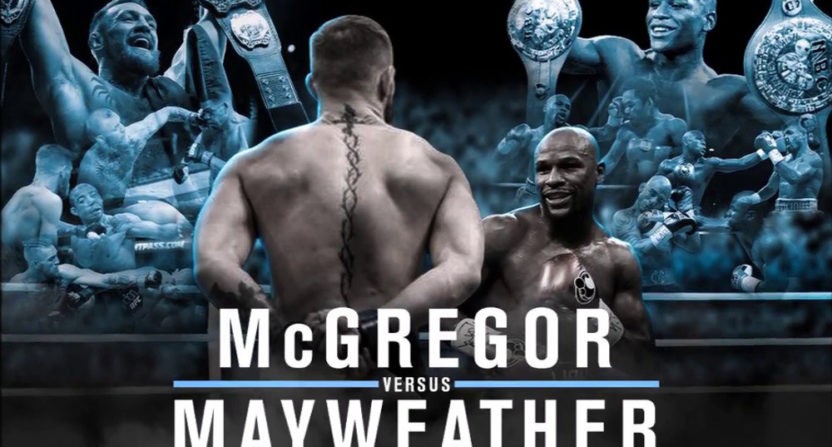 It would be pretty hard to be a sports fan and have absolutely no idea that Floyd Mayweather Jr. and Conor McGregor are fighting each other on Saturday, August 26th. It would be even more impossible to work in Las Vegas and have no idea the two are slated to fight because of all the money being gambled on the game.

Nick Bogdanovich, the director of trading for bookmaker William Hill, told CBS Sports there have been 16 times more bets placed on McGregor than on Mayweather. McGregor is considered the underdog so if he pulls off the upset, Bogdanovich thinks William Hill could suffer “a good seven-figure loss.”

“I knew there would be money on McGregor — they bet him heavy in UFC — but never in a million years did I think it would be this kind of money,” Bogdanovich said. “I think there will be some late Mayweather money but not enough… We’re going to need Mayweather big, just not sure how big.

That has to be frightening for someone like Bogdanovich. With so much money being placed on the underdog, an upset could be colossal to a bookmaker’s bottom line. Then again, a lot of it also depends on how big some of the bets are, and some of the ones filed so far through William Hill are massive.

“We’re certainly in need of Mayweather, but not like some of the other properties around,” SuperBook director Jay Kornegay told CBS.

Superbook took a couple six-figure wagers on Mayweather, which helps them balance out their book by countering 95% of the bets they’ve received for McGregor.

According to CG Technology, even though a lot of money is being gambled on McGregor, the majority of the money is being placed on the favorite Mayweather.

Some of that could be due to the fact that the lines haven’t moved a ton over the last six months.

Floyd Mayweather is now down to -400 to beat Conor McGregor. #MayweatherMcGregor pic.twitter.com/NmtvpJqfvJ

At the end of the day, some people will win a ton of money and others will lose. The casinos and sports books just hope they are the ones winning a ton, and not the opposite. And for books like William Hill’s, a Mayweather win may be the only way to do that.