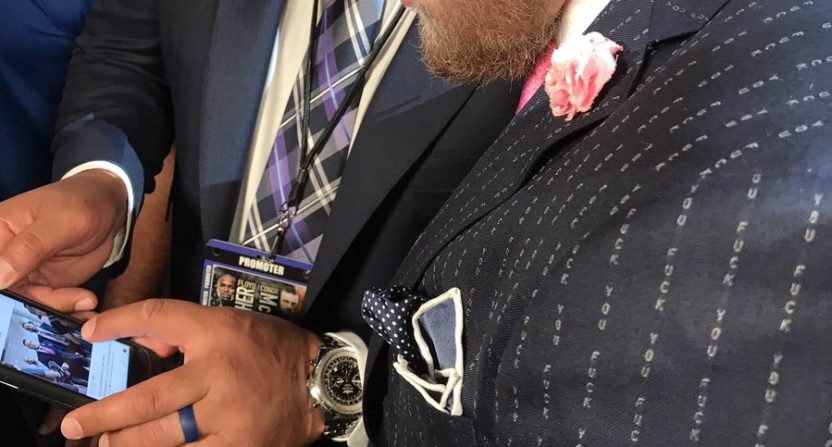 During their press conference tour to promote their big time fight, Floyd Mayweather Jr. and Conor McGregor made headlines for various reasons. One big headline on social media, revolved around Conor McGregor’s suit.

It wasn’t that McGregor wore a baby blue suit or a suit that once belonged to another celebrity. Instead, McGregor’s suit gained notoriety for having the words “F— You” on it.

Well guess what, if you liked the suit enough to maybe try and get your own one day, now you can!

Here is what the suit company David August, Inc. says about the suit when you custom order it:

Infamy and notoriety isn’t always bad, especially in the case of one bold, brave, confident friend of ours who revels in pushing boundaries. For those interested in taking similar risks, we have recreated our original custom 3-piece suit produced exclusively for Conor McGregor and we are making it available as a limited-edition custom order.

Produced in an exclusive woven Super 130’s wool in navy twill, this pinstripe effect is created with explicit fighting words presented in a vertical repeat. This couture label suit features details like:

According to David August, Inc. the suit will take between 12-15 weeks to make. The price? A nice big $6,500. I don’t even think all the suits I own combined are worth that much.

At that price, the question now becomes would anyone pony up the money for one? I’m sure someone will, but on Twitter, plenty of people thought it was a stupid idea to begin with.

I wonder if there would be any punishment if an attorney wore this to court.

Great for your church socials or weddings.

Only a person with zero class would wear this.

I think I’ll pass on this too.