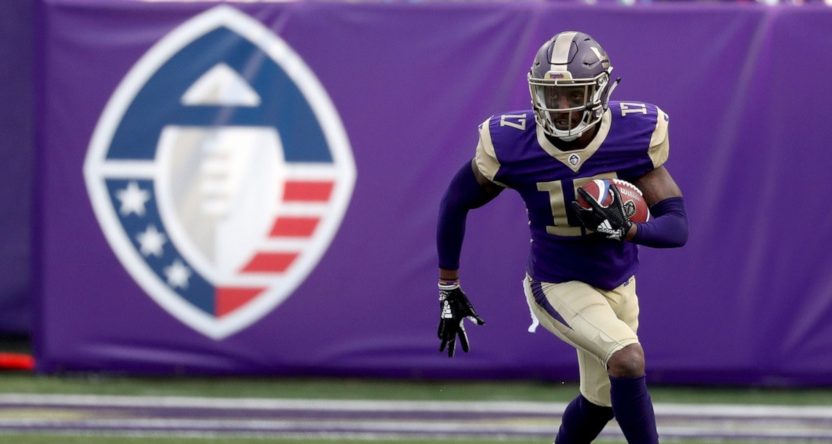 The Alliance of American Football’s first season appears to have come to a premature end. Mike Florio of Pro Football Talk reported Tuesday that the league is suspending all football operations:

It’s not over. But it’s close.

Per a source with knowledge of the situation, the Alliance of American Football will be suspending all football operations within the next few hours.

The league won’t be folding, yet. But it seems to be moving in that direction.

AAF majority owner Tom Dundon (also the owner of the Carolina Hurricanes, and a guy who only bought into the league after Week 1, amidst a report the AAF was having trouble making payroll) said last week that the league could be discontinued if the NFL and NFLPA didn’t agree to loan them under-contract players (which is a vastly-different idea than how the AAF was founded and running, and one that understandably drew a lot of reluctance from the NFL and NFLPA), telling USA Today‘s Kevin Allen and Mike Jones “If the players union is not going to give us young players, we can’t be a development league. We are looking at our options, one of which is discontinuing the league.”

It now appears Dundon is set to do that, reportedly over protests from the AAF’s co-founders:

That’s going to leave the networks that televised the AAF with some programming holes. This week has a Memphis Express (feat. Johnny Manziel) – San Antonio Commanders game on CBS at noon Eastern Saturday (ahead of the Final Four), plus games at 8 p.m. Eastern Saturday and Sunday night on NFL Network. (There’s also a Sunday afternoon game on B/R Live, but that app doesn’t have to fill specific programming slots). Next week, NFLN was again set to show games Saturday and Sunday night, and CBSSN was set to show a Sunday afternoon game. The playoff semifinals were set for noon and 3 p.m. Eastern on Sunday, April 21, on CBS and TNT respectively, and the championship game was set for 8 p.m. Eastern on Saturday, April 27 on CBS.

The networks can obviously find some reruns to slot into those gaps, but the AAF had been a pretty good TV draw. It took a downturn in the last few weeks, but it worked quite well early on, which led to TNT and CBS both adding more games. And the playoff audiences might have been even better, especially given the wide distribution of CBS and TNT. So it’s interesting to see the league punt at this point.

What are the finances involved here? Well, Florio reported that as per a source, the AAF “needed roughly $20 million to get to the end of its first season.” That’s covering the final two weeks of the regular season, and then two weeks of playoffs (a week with two semifinals and a week with a championship game). At the $70,000 per player for Year 1 that was widely reported, player salaries alone look to be costing the league $2.9 million a week, so that’s $5.8 million for the end of the regular season. And that’s before playoff compensation and bonuses, and before costs for coaches, front office staff, travel, gameday operations and more, so $20 million sounds about right.

It’s definitely curious that Dundon wouldn’t just put that $20 million in (considering that he’d already spent about $70 million, and had said he’d invest $250 million, albeit with some outs) to finish the season successfully and then try and figure out where the AAF goes from there. They’d seemingly be in a stronger position with an actual season under their belt. But maybe he was convinced that this league wasn’t going anywhere for the long term without a NFL/NFLPA deal (which, again, seems highly improbable and not forthcoming), and decided to stop throwing good money after bad. Or maybe there’s some other play here where the AAF will actually return from this suspension in some form; it should be noted that lawsuits and moves to the fall have already been tried unsuccessfully, though. In any rate, a return for the AAF seems to be a long shot right now, and fans of alternative football leagues may be turning towards the more-securely-financed XFL…

4 thoughts on “The AAF is suspending all football operations, leaving CBS, TNT, NFLN, and CBSSN with some programming slots to fill”