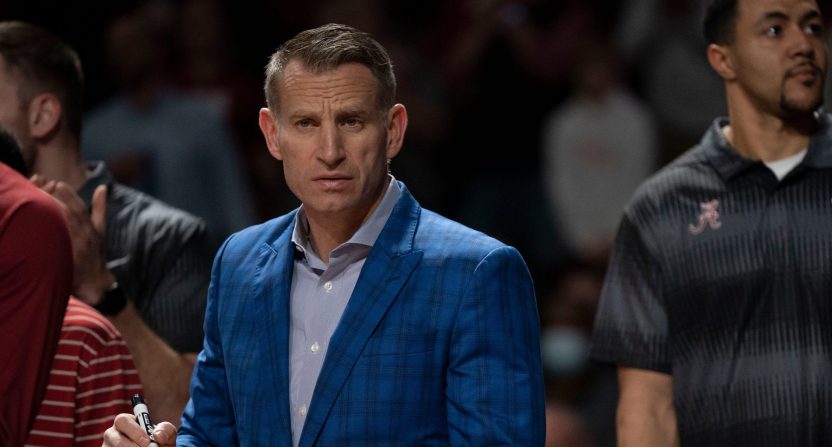 The Alabama basketball program is still reeling from the announcement that former basketball player Darius Miles was allegedly involved in a murder that took place last Sunday.

Miles is alleged to have provided the gun that killed 23-year-old Jamea Jonae Harris. The team was able to win against Vanderbilt this week but there are still a lot of questions to be answered. Head coach Nate Oats talked about the game, saying many of them broke down after the game as if it were a sense of relief that the game was finally over.

The No. 4 Crimson Tide faces another tough test on the road against Missouri Saturday night. Friday, Oats talked about the game but also delved into Miles’ character and how much he still cares for the former player who is now facing charges.

“Look, I love the kid. He’s super easy to talk to. He still is,” said Oats on Friday. “I mean, he’s one my favorite kids I’ve coached. So during the recruitment process, there was none. I mean, you get the typical, ‘He’s so talented that sometimes maybe he takes plays off.’ That had nothing to do with his character off the floor at all. There was zero off-the-floor character issues when we recruited him.”

Oats also said that Miles came from a good family but this has shaken them all because no one saw this coming.

“To be honest with you, even when he was here, we had no real issues with him off the floor,” said Oats. “He’s a likable kid that everybody liked. The only issues we ever had were just trying to get him motivated, play a little harder in practice, be more consistent. Just basketball stuff, to be honest with you. So nobody saw this coming.

“He comes from a really good family. His dad’s retired military. His dad’s got a great job back in DC. He’s a great guy. His mom’s a police officer in the DC area, and she’s a great woman. I just feel awful for both of them because this isn’t really anything anybody ever anticipated Darius getting caught up in.

Now Miles, who is from Washington, D.C., faces the potential of life in prison or the death penalty, not to mention the ramifications that this incident will inflict on the victim’s family, his own family, and his Alabama family.