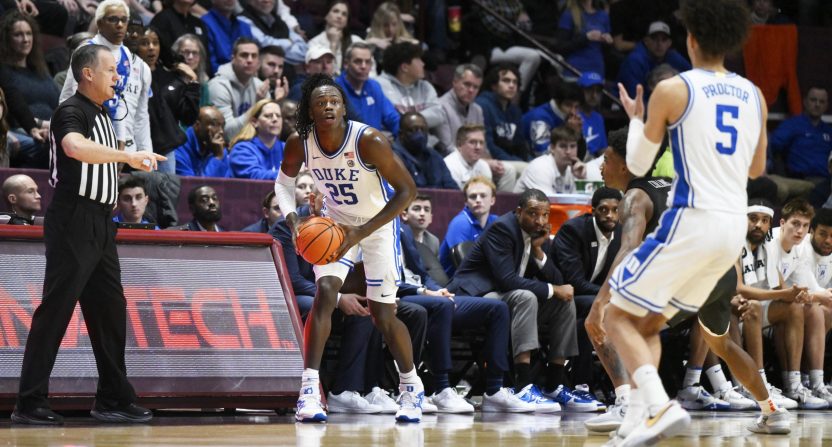 The Duke Blue Devils took on the Virginia Tech Hokies on Monday in an ACC basketball game that went down to the wire. However, a questionable no-call at the end of the game certainly had a massive impact on the end result.

The play occurred with just 13.3 seconds remaining in the game after a clutch shot from Hokies freshman Michael Collins Jr.

This shot gave Virginia Tech a two-point lead late in the game. Collins was undoubtedly overexcited by the shot, proceeding to accidentally punch Duke’s Kyle Filipowski in the neck.

Filipowski was clearly affected by this, but no call was made on the play. Duke ultimately went on to lose after missing on their next possession.

The college basketball world took notice of this play and most believe that a flagrant foul should have been called.

This was called a no foul. If a Duke player did this everyone would be crying they are scumbags. Throat punches are legal now pic.twitter.com/xrZZ2DXl8I

Going to say this once more and move on — because there are much bigger issues with this team:

This non-call was absurd. The officials called a foul on Mark Mitchell simply because Justyn Mutts flailed. There were even calls that went in Duke’s favor that seemed questionable! https://t.co/eiLwNSq3Da

Watching Duke game and getting the idea it must be OK if a player celebrates a basket by cold-cocking a guy. No foul.

Crazy last play. The call was adjudicated incorrectly. There does not have to be intent. If there was intent it would be a flagrant 2 but because of the contact above the shoulder it must be a flagrant 1 @DukeMBB @HokiesMBB

There was obviously no clear intent from Collins, but that isn’t a factor on a potential flagrant 1 foul.

According to the NCAA rulebook on flagrant fouls, anything “unnecessary or avoidable” and “uncalled for” should be called for a flagrant 1 foul.

“A flagrant 1 foul is two shots and the ball and that means excessive in nature or unnecessary or avoidable, uncalled for or not required by the circumstances of the play,” the rulebook reads.

There were certainly other factors that went into the loss for Duke, including an uncharacteristic poor defensive game. They average just 63.5 points allowed on the year and Virginia Tech far exceeded this with 78 points on the night.

If this call were made, Duke would have been given two free throws while maintaining possession. Instead, this loss is a devastating one against a Virginia Tech team coming in with a seven-game losing streak.