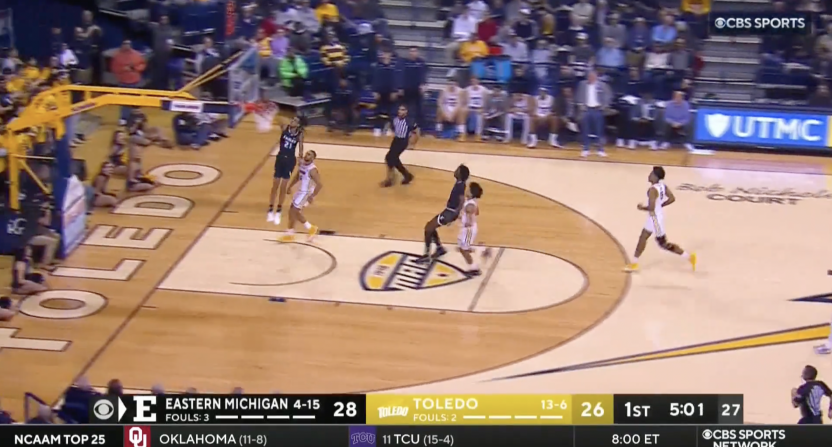 Former Memphis Tigers commit and current Eastern Michigan Eagles forward Emoni Bates came into college with some very real potential to be a one-and-done and head to the NBA. That didn’t come to fruition after a failed first year at Memphis, but he showed off that potential with an unreal performance on Tuesday night.

Bates had an absolutely incredible first half, at one point scoring 29 straight points in their attempt at an upset over the Toledo Rockets.

Unfortunately for Bates, he didn’t get all that much help from his teammates. Every other Eastern Michigan player only scored six combined points in the half, resulting in Toledo holding a one-point lead at halftime.

The rest of the team has 6 POINTS at the half pic.twitter.com/JGtLVff1dI

Bates continued his impressive play in the second half, finishing the game with 43 points while shooting 15-23 from the field, making nine three-point attempts in the process.

Despite this dominant performance, Eastern Michigan would go on to lose the game after Bates missed a three-point shot with just 20 seconds remaining down by three points.

Regardless, his unbelievable game caught the attention of the college basketball world, with many happy that he is starting to show his insane potential on the court.

Emoni Bates with a performance that we'll NEVER forget. 43 points for the Memphis transfer, but Toledo rallies for a key league win.

Emoni Bates had a career-high 43 points for Eastern Michigan this evening.

Okay this is getting ridiculous… Emoni Bates has NINE threes 🔥 pic.twitter.com/Vd6tdulf8Z

His performance is one of the best in recent memory, being the only player in the last decade to score 43 points on only 23 shot attempts and four free throw attempts.

Emoni Bates scored 43 points tonight on only 23 attempts and 4 FTAs.

He’s the only player in the last decade to do that, per @EvanMiya. https://t.co/qXZmZPP4uv

Coming into college, Bates was ranked the No. 5 high school prospect by 247 Sports in the 2021 recruiting class and was even compared to Los Angeles Clippers star Paul George as a prospect.

While it remains unlikely he will ever see those heights as a player, this performance shows that Bates is very clearly still a player with NBA potential.