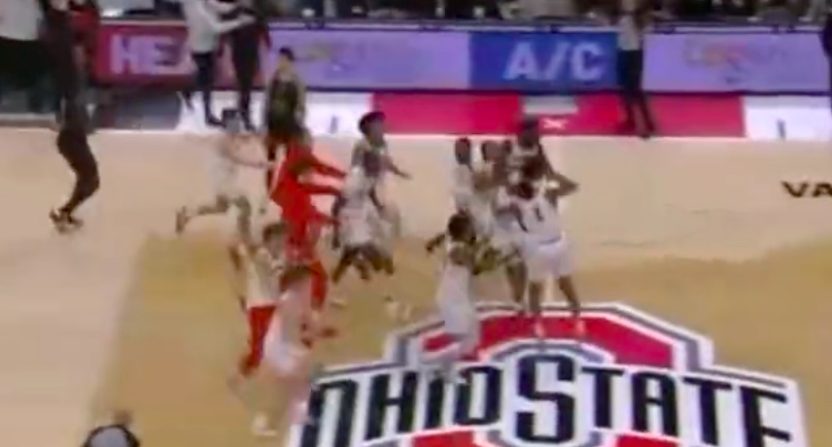 The record books will show that Thursday night No. 25 Ohio State defeated Rutgers on a desperation three-pointer by guard Tanner Holden at the buzzer.

There will be no asterisks attached to the play as the Buckeyes held off the upset bid from the Scarlet Knights, winning 67-66.

Ohio State's Tanner Holden sinks a three at the horn to stave off the upset bid from Rutgers.pic.twitter.com/o8yHPEtZlG

But the play immediately sparked controversy. Rutgers coach Steve Pikiell said after the game he thought Buckeyes guard Bruce Thornton stepped out of bounds dribbling the ball up court on the final play. That is not a reviewable call for officials.

“I thought he kind of went out of bounds,” Pikiell said (via Brian Fonseca, NJ.com). “I’m not sure. They hit a huge three and won the game.”

Fans who watched the thrilling finish quickly pointed out officials missed several other issues on that game-winning play. First, the clock seemed a bit slow to restart after the missed free throw that started Ohio State’s game-winning rush down court. Thornton appeared to get fouled as he dribbled up court. Finally, Holden appeared to step out of bounds and fans claimed he did not reestablish himself before getting the ball and taking the final shot.

All those issues are shrouded in mystery because ESPN2 left the broadcast before showing replays, switching instead to another  game.

“They also didn’t call an obvious foul when he was taking the ball up the court,” pointed out another fan.

“This is BAD officiating. … How do your officials not even go to the monitor?” another fan noted.

This view of the #Rutgers / #OhioState ending shows the entire ending up close. pic.twitter.com/JukW87yR7l

The guy that was passed the ball for the shot was out of bounds and never fully re-established in bounds as well. The play had many things wrong with it.

This is BAD officiating. #0 clearly doesn’t re-establish both feet back inbounds. How do your officials not even go to the monitor? @RutgersMBB pic.twitter.com/VAgDvZCaj3

I am very pissed!!! I was just told on ESPN that there is no way that shot should have counted!! UNREAL!!! Total screw job by the officials!! VERY FISHY!! Clock, out of bounds, 1st to touch!!! @bigten @espn @RutgersMBB @RUAthletics #rutgers #bigten #ohiostate

Out of bounds. Rutgers wins pic.twitter.com/y2Z4WDKQ5W

Fans can debate the final play all they want. Bottom line: Holden hit a thrilling shot at the buzzer and the Buckeyes won.