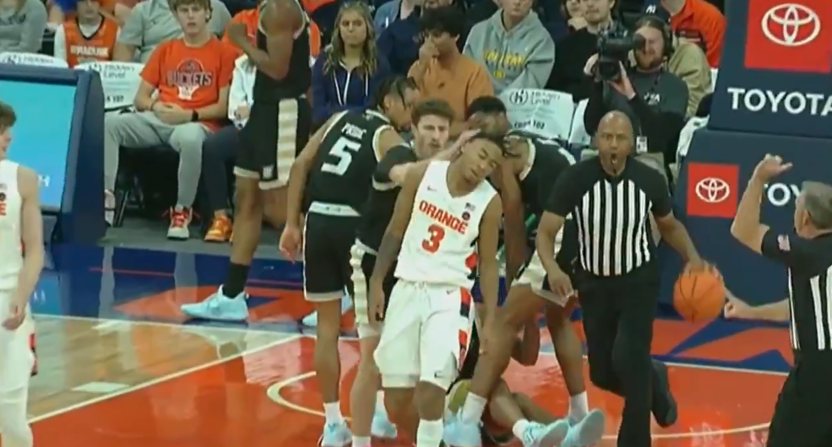 The Syracuse Orange men’s basketball team took to the court on Saturday against the Bryant Bulldogs. That game featured multiple ejections after a brawl broke out on the court.

The fight occurred in the first half after Syracuse guard Judah Mintz drove to the basket and was called for an offensive foul.

Mintz then got into a shoving match with Bryant star Doug Edert. This led to Minzt slapping Edert in the face, which was then reciprocated by Edert causing chaos on the court.

Things getting out of control up in Syracuse.
Cuse guard Judah Mintz slaps Bryant's Doug Edert and then Edert comes right back with a slap on Mintz as both benches clear.
Both players were ejected.@NBC10 pic.twitter.com/BikzSj1HWl

This led to a double technical fouls and ejections for both players, along with two other Bryant players and  a number of coaches on both sides who left the bench area to get involved in the incident.

We have double-technicals and ejections for Mintz and Edert.

In addition, Bryant's Tyler Brelsford and Kvonn Cramer are ejected for leaving the team bench.

Luckily, referees were able to quickly break up the incident before even more blows were thrown from either team.

Many fans watching the game took to social media to give their take on the altercation.

RUN FOR YOUR LIFE!!

That was an eventful 15 seconds for Doug Edert. pic.twitter.com/oTsPSWzO0s

Doug Edert ran away so fast 😭​

Doug Edert made a business decision after that slap pic.twitter.com/GDO8V909mV

UPSTATE NY DEVELOPMENT: Syracuse's Judah Mintz and Bryant's Doug Edert have both been ejected following an altercation in the first half.

Bulldogs lead by 8 with 7 minutes left in the first half.

This is ONLY November.

Edert famously became the darling of last year’s NCAA Tournament while at Saint Peter’s during their miraculous run to the Elite Eight. He transferred to Bryant last offseason.

Edert was clearly a feisty player last year, and that was on full display on Saturday in this altercation.

Both Edert and Mintz came into the matchup as their respective team’s top scorer on the year, so this was clearly a significant loss for both teams in the game.

The craziness of this matchup remained throughout the rest of the game. Bryant ultimately won the game 73-72 on a wild buzzer-beater from senior guard Sherif Gross-Bullock.

SHERIF GROSS-BULLOCK!@BryantHoops takes home the 73-72 win over Syracuse at the Dome behind this game-winner! pic.twitter.com/W4OTTfKN5D

It can certainly be argued that Syracuse may have won this game if they had had Mintz down the stretch of this game.

Long-time Syracuse Orange head coach Jim Boeheim discussed the incident following the game, saying that Mintz has to learn from this moment.

“You can’t do that. You gotta learn. It’s a hard way to learn,” said Boeheim, via James Szuba of NunesMagician.com.

Jim Boeheim says Judah Mintz can’t slap a player like he did today. “You can’t do that. You gotta learn. It’s a hard way to learn.” pic.twitter.com/4PfKyITpKG

This will surely be a learning moment for Mintz as he progresses through his freshman season at Syracuse.