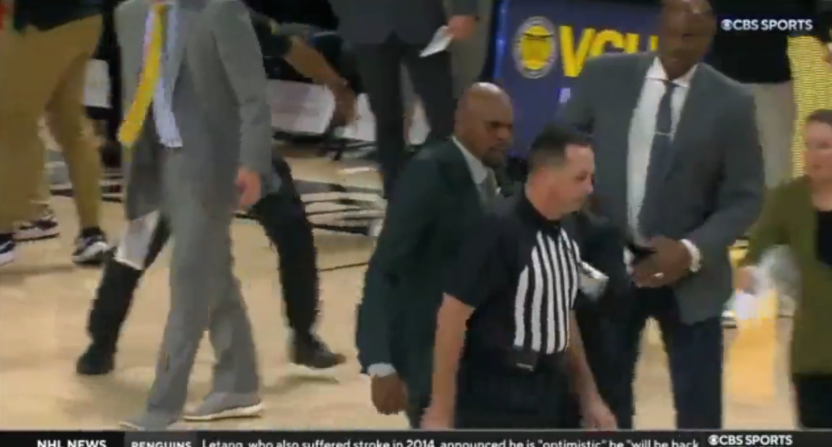 Wednesday’s matchup between the Vanderbilt Commodores and the VCU Rams featured one of the wildest ejections of a coach in recent memory, involving Commodores head coach Jerry Stackhouse.

The ejection occurred in the second half with 7:59 remaining in the game. Vanderbilt center Liam Robbins received a technical foul after a dunk over a VCU player due to Robbins celebrating the play as he walked back down the court.

This was what had Jerry Stackhouse steamed up and eventually led to his double technical and ejection. Liam Robbins dunked, did the "on his head" celly and then earned a T. Seems like . . . Stack had every reason to be upset? This was pretty soft. pic.twitter.com/buGz5rwXPc

This clearly set off Stackhouse, who proceeded to absolutely lose his mind towards the officials during the TV timeout shortly after Robbins’ technical foul call.

In a video shared by Kyle Boone of CBS Sports, Stackhouse began to scream at the officials about the call while being held back by assistant coaches.

Despite his assistant coaches holding him back, Stackhouse aggressively walked toward officials that were walking away from him, continuing to scream at them.

Security was needed to pull Stackhouse away from the situation, and he was subsequently ejected from the game and escorted off the court by security.

It was certainly a wild scene, and many took the chance to give their opinion on Stackhouse’s ejection on social media.

Jerry Stackhouse tossed in Richmond. And boy did he get his money’s worth. https://t.co/YSWgDPoeyT

There are many things I would choose not to do in life and one of them is making a call so egregiously awful that Jerry Stackhouse wanted to fight me.

Zero justification for Jerry Stackhouse to go bonkers. But this was an atrocious call. I don't understand how some officials prevent even an ounce of fun. https://t.co/xRTxaBCosO

Just got off Newschannel5+. The technical foul that sent Jerry Stackhouse off was absolutely absurd. He might have taken it too far from there, but that's terrible officiating.

Jerry Stackhouse has been ejected from Vanderbilt's game at VCU following a technical against Liam Robbins.

Stackhouse had to be escorted off the court by security after arguing with officials.

Wild scene at the Siegel Center.

Jerry Stackhouse was ready to go to war with that ref pic.twitter.com/DgmGwLBU95

Stackhouse was asked about the situation after the game, and he didn’t back down from his stance against the officials.

According to Vanderbilt beat writer Aria Gerson, Jerry Stackhouse said in his opening statement to the media that he thought the game was “poorly officiated”.

He also admitted that he needs to keep his cool far better than he did on Wednesday night.

“I gotta have more poise and more control,” Stackhouse added.

Vanderbilt went on the lose the game, and it can certainly be argued that his insane ejection was a big factor in that loss.