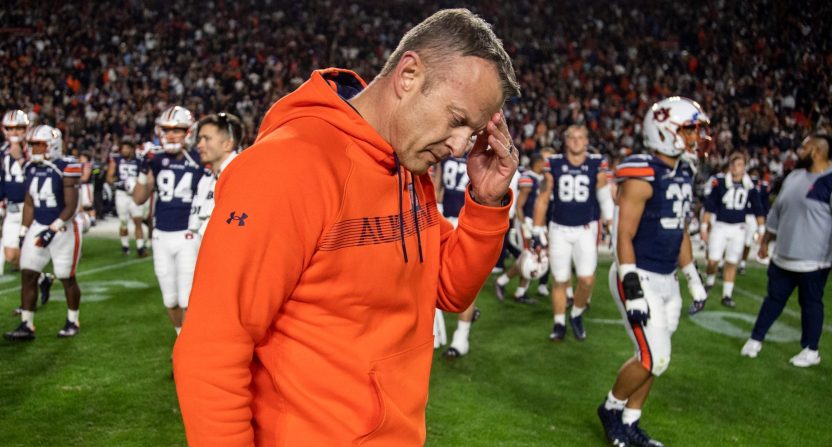 Rumors have swirled about Auburn head coach Bryan Harsin’s job security much of this year, but a report Wednesday that he’s already been told he’ll be fired after the season was quickly shot down.

The source of the latest rumor: former Alabama and NFL quarterback A.J. McCarron, who told The Ringer podcast Slow News Day that, “From my sources over there, Harsin’s already been told he’s done after this year.”

SND: AJ McCarron has sources who say Auburn coach Bryan Harsin was informed he is out at the end of the year (at the latest). More on that and what Auburn can do to fix itself below. AJ was *awesome*.
Full episode coming tomorrow night. Follow on Spotify: https://t.co/GmEbxvQ030 pic.twitter.com/lat5swac3X

AL.com, however, quickly dispelled the report, noting that Auburn sources said, “Harsin has not been informed that his job status is in peril, nor has he already been told he will be fired by the end of the season.”

Yet this is the second report in a matter of days concerning Harsin’s job security. ESPN college football analyst Paul Finebaum told a Birmingham, AL radio station Monday that Harsin will most likely be gone soon.

“It’s over for Bryan Harsin. He’s made no compelling argument to keep his job,” Finebaum said.

That came on the heels of Auburn’s 17-14 overtime victory Saturday over the Missouri Tigers. That ran Auburn’s record to 3-1 on the year. That one defeat, a 41-12 home loss to Penn State, was the worst non-conference home loss by Auburn since 1982. So fans are a bit on edge about the team’s performance.

Of course, all this comes on the heels of a controversy earlier this year, when the university investigated the football program after 20 players and five assistant coaches left following last season.

The Tigers are 9-8 since Harsin assumed control of the program in 2021. It’s not a stretch to say that many Auburn fans would be happy to see the university buy out his contract (an estimated $15 million if he’s terminated at season’s end).

I, for one, am stunned to learn that AJ McCarron was incorrect about the SCOOP he threw out there that made no sense whatsoever. https://t.co/lq1zXgLJ0c

Hey, this is how Herbstreit broke into journalism and look at him now https://t.co/7Er3PzeOKP

Who *doesn’t* have sources who say Bryan Harsin is out at the end of the year? https://t.co/PhtsJ3ihI4

Bryan Harsin trying to save his job pic.twitter.com/dUkAiexMmv

According to Bryan Harsin, "everyone is day-to-day" — like, everyone.