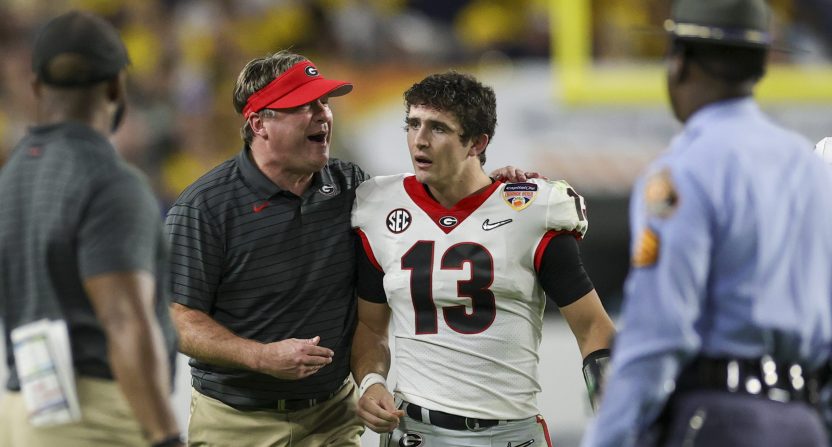 ESPN’s Bomani Jones never shies away from giving his opinion on sports topics but this one may shock a few people, especially in the SEC.

On a recent episode of The Right Time with Bomani Jones, he said that he would choose Florida quarterback Anthony Richardson over Georgia quarterback Stetson Bennett.

Although Jones praised Bennett for proving him wrong and leading Georgia to victory over Alabama in the national championship game, he said Bennett “is what he is” and that he doesn’t think the Bulldogs’ signal-caller would be as successful in a rematch against Bama.

new #TheRightTime with @elleduncanESPN we discuss her broncos, the cowboys, her take on tom brady and where she can relate to his situation, matt ryan and more!

“You would like to have a better quarterback,” Jones said. “I don’t care how inconsistent he may be, I would rather have Anthony Richardson than Stetson Bennett.”

Richardson hasn’t really been that impressive since he carried the Gators to victory over Utah, although he did show flashes of greatness against the Tennessee Vols a few weeks ago in a loss.

The Gators quarterback’s passing hasn’t been impressive this season as he’s barely thrown over 1,000 yards so far and has more interceptions (6) than touchdowns (4). But he was impressive against the Vols, throwing for 453 yards and two touchdowns. He also is a better runner than Bennett too.

Still, Bennett’s team is the defending champs, currently undefeated, No. 2 in the country, and he has passed for more yards and touchdowns than Richardson.