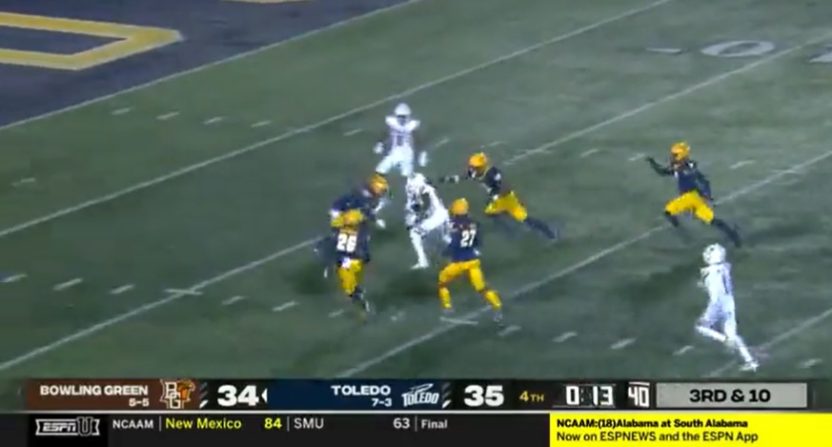 The #MACtion was out in full force for Tuesday night’s college football game between Bowling Green and Toledo. The game even featured snowy, messy conditions in Toledo to add to the wackiness.

Bowling Green came away with a 42-35 victory as a 15-point road underdog.

It appeared that Toledo may have gotten the game-winning score with less than a minute remaining.

On 4th-and-7, Toledo quarterback Tucker Gleason connected with Devin Maddox for what appeared to be a 30-yard touchdown. After review, it was ruled that Maddox stepped out of bounds inside the one-yard line.

But on the next play, Gleason ran it in for a touchdown. Toledo made the extra point to take a 35-34 lead. It was the Rockets’ only lead of the game.

On the ensuing drive, Bowling Green had a 3rd-and-10 at the Toledo 42-yard line. Falcons quarterback Matt McDonald navigated pressure in the backfield and threw a pass that Ta’ron Keith caught at the 35-yard line.

Well, Keith turned the short pass into a 42-yard touchdown with nine seconds remaining. Credit the Toledo defense with the assist on that one, thanks to brutal tackling efforts.

ESPNU’s Connor Onion: “THIS! IS! MACTION!”

Bowling Green had a 21-0 lead in the second quarter and led 34-21 into the game’s final six minutes. So, a loss would’ve been extremely frustrating for the Falcons after they were in full control of the game for most of it.

And with the victory, Bowling Green becomes bowl eligible. The Falcons are 6-5, and they’ll have the opportunity to clinch a winning record next week at the Ohio Bobcats. Toledo falls to 7-4 with the loss.

College football fans were very entertained by this #MACtion classic:

How can you not be romantic about MACtion!? https://t.co/JqqURUw97L

Bowling Green takes down Toledo in the Battle of I-75 pic.twitter.com/Ht17nuT0Fw

This was a Bowling Green touchdown. pic.twitter.com/N5UqctRZHF

We can still get a Battle of I-75 rematch in the MAC title game.

The Toledo/Bowling Green game was everything #MACtion is supposed to be.

BOWLING GREEN MIRACLE IN THE SNOW

Former Bowling Green HC Urban Meyer was never able to take them to a bowl game. Scot Loeffler has the Falcons eligible and just might!