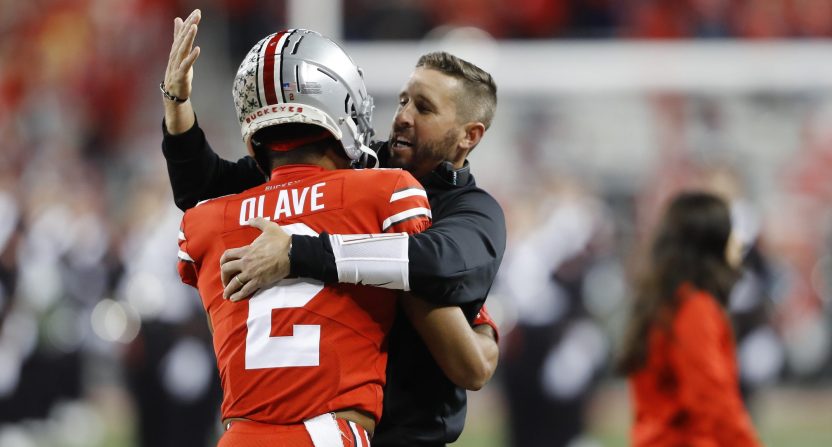 The Cincinnati Bearcats football team might be on the verge of making an absolutely huge splash hire.

After Cincinnati lost Luke Fickell to the Wisconsin Badgers, the Bearcats have reportedly zeroed in on their next target. They didn’t look too far away either. Cincinnati is reportedly in pursuit of Ohio State Buckeyes wide receivers coach Brian Hartline.

Football Scoop reported Wednesday night that the Bearcats have planned to interview Hartline. They tweeted, “Interviews ongoing at Cincinnati to include Ohio State assistant Brian Hartline.”

In the report from John Brice, he wrote, “While several additional candidates have emerged for the Bearcats’ head job, sources on Wednesday told FootballScoop that there has been a gain in momentum for star Ohio State assistant coach Brian Hartline.”

Brice continued, “Sources told FootballScoop that Cincinnati’s formal interview with Hartline was expected to take place in the near future, perhaps as soon as Thursday.”

Hartline served as wide receivers coach for the Buckeyes from 2018-2021 before he transitioned to be the passing game coordinator as well. An outstanding amount of receivers that have come through Columbus have enjoyed success at Ohio State and the NFL. To name a few, Chris Olave, Garrett Wilson, Terry McLaurin, Parris Campbell, and K.J. Hill have all been drafted after playing under Hartline.

This would be a massive blow to the Buckeyes after an already miserable stretch. Ohio State lost to rival Michigan in back-to-back seasons for the first time since 1999 and 2000. The Wolverines went into Columbus on Saturday and scored their first win there since 2000.

Already, there’s fear out in Buckeye Nation after this rumor broke.

Brian Hartline to Cincinnati would be a HUGE loss for The Ohio State program. Hartline has been BIG TIME since he stepped foot in Columbus. On the field. Off the field. BH is as elite as they come. However, the Buckeyes would still be WRU.

Ohio State offensive coordinator Brian Hartline has a nice ring to it.

Ohio State needs to do whatever it takes to keep Brian Hartline you can’t let him go to Cincinnati. pic.twitter.com/4zMJy43uHU