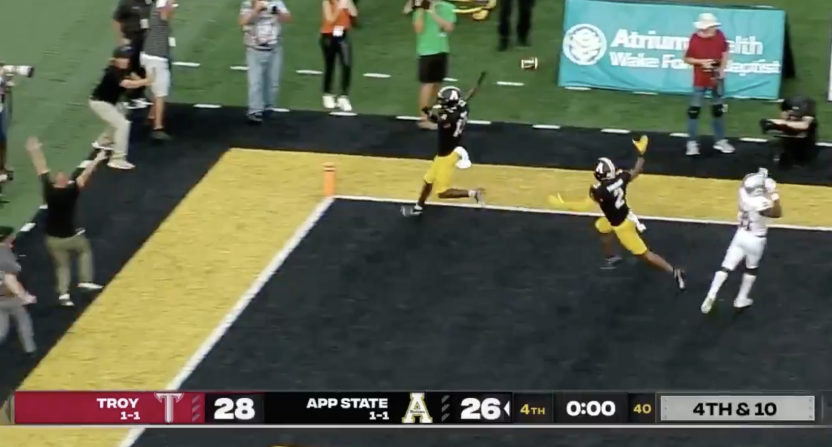 It’s Appalachian State’s world, we’re all just watching college football in it. The same day that the school hosted ESPN’s College GameDay, they completed an astounding comeback with a Hail Mary touchdown to defeat the Troy Trojans and continue their magician season.

Troy was all set to pull off the huge upset and ruin App State’s big weekend as they clung to a 28-24 lead with 25 seconds remaining in the game. Stuck deep in their own territory, instead of punting, Troy decided to take an intentional safety, much to the surprise of just about everyone watching at home.

With the score now 28-26, Troy kicked to App State, who could now try to set up a field goal to win the game. However, that didn’t work and the Mountaineers were left with a Hail Mary play as time expired as their only chance. And in keeping with the wildness of their season so far, they completed the pass and won the dang game.

APP STATE WON ON A HAIL MARY ON THE FINAL PLAY‼️ pic.twitter.com/yDlzYYtU19

It’s perhaps even better with the home radio call by Adam Witten.

AS CALLED BY @AdamBWitten AND HEARD ON THE @varsity APP: pic.twitter.com/QztnYi7T8k

It’s a storybook ending on a day when the entire college football world was watching Boone, North Carolina. That it also comes one week after their epic upset of Texas A&M in College Station just makes the whole thing so much sweeter for the Sun Belt school.

Of course, the reactions from around the college football world were off the charts.

In the last 20 years of college football, App State has to be one of the most fun teams you could possibly have rooted for.

-Multiple FCS titles
-Stunning upsets of top 10 teams on the road including The Big One
-Seamless/successful transition to FBS
-Chaos like, every week https://t.co/FvqTvDpA29

They’ll ruin your life, it’s what they do https://t.co/MGMcCvoxsN

Hail Mary from APP… that is ridiculous. https://t.co/gbA72TSiKa

WHAT IS HAPPENING AT APP STATE! OMG!! https://t.co/PqrapV0mwI

Host College GameDay and win like this. They'll never forget this day. pic.twitter.com/IjonkpWejr

What wonders await App State and the college football world next?