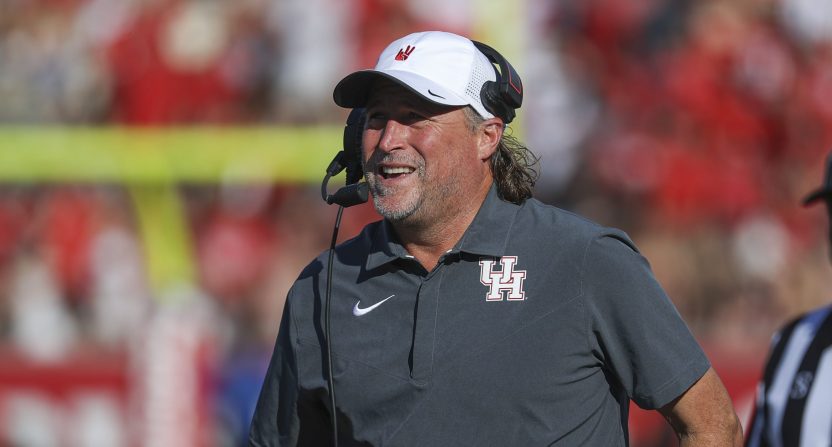 Saturday was a mixed bag for the Houston Cougars. On the positive end, they pulled out a tough 34-27 victory over their crosstown rivals, the Rice Owls. That gave the Cougars their seventh straight win in the Bayou Bucket Classic, a record in the rivalry. On the negative side, it wasn’t a crisp effort, at least not according to Houston’s football coach, Dana Holgorsen.

In his postgame press conference, Holgorsen said (per Joseph Duarte of the Houston Chronicle) that he was “tired of yelling at them. Tired of motivating them. Tired of all that crap.”

Motivating is a big part of being a coach, particularly at the college level. Also, sometimes, yelling at players is necessary. It’s never fun, but it’s something that the best coaches in the history of college football have done, virtually without exception.

With all of that in mind, Holgorsen didn’t earn a lot of sympathy.

Tired of motivating them? https://t.co/8tACbywh0m

That is why you are paid millions of dollars, Dana… https://t.co/4KYDDggU8r

So, tired of being a college football coach?? 🤷🏻‍♂️ https://t.co/wYuGFV3eZI

Perhaps the problem is "you," and not "them." https://t.co/NlCWHBrWuQ

Then turn in your millions and walk away. That's your job dude. https://t.co/KNDF84nxZs

All that crap is called your job, buddy https://t.co/Ktp3b5K1VM

Amazingly, Holgorsen was not even done. Shortly after making those comments, he said (per Duarte), “I’ve coached the same way for 34 years. This s**t is hard, and it’s getting irritating.”

And it gets worse.

As bad as these comments are, there are some scenarios where we could at least feel sympathy for a coaching talking like this.

One would be if the issues with the program were beyond just typical wins and losses. That does not seem to be the case for Holgorsen.

Another would be if we were dealing with a coach nearing the end of his career and at the tail end of a long contract. Coaching would still be his job but if this was a contract he signed five years ago, we could sympathize with him being worn down at the end of it. Neither of those apply to Holgerson — nor do they come terribly close.

Holgorsen is 51. He’s not a young coach, but he’s certainly not old. For comparison’s sake, Nick Saban was 52 when he won his first national championship. Second, in March, Holgorsen signed a six-year extension at Houston that will keep him there through 2027 and will pay him north of $4 million this year. Now, four games into that extension, he’s burned out?

A coach is certainly entitled to be frustrated. But this wasn’t the greatest way to express that frustration.