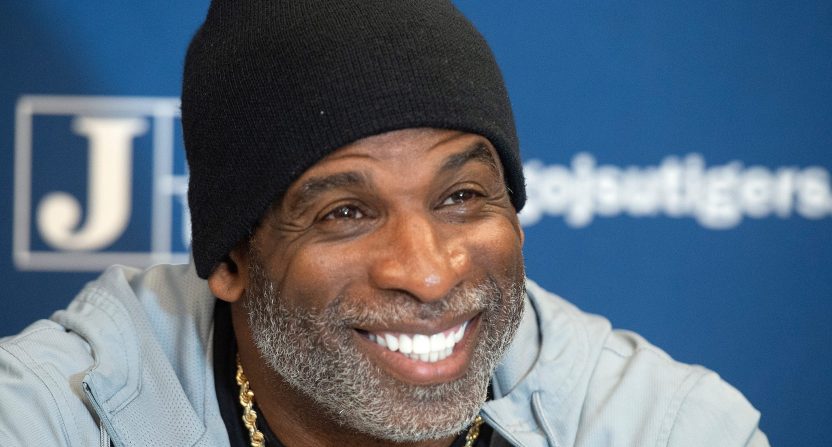 In all likelihood, Deion Sanders has coached his last game at Jackson State. Reports emerged on Friday that he was preparing to take the offer from Colorado. That left a potentially awkward situation, with Sanders’ Tigers playing in the SWAC Championship Game against Southern.

If there was any awkwardness from Jackson State, it didn’t show on the field — at least not during the game. The Tigers opened up a 26-0 lead after the first quarter and handily defeated Southern, 43-24. After the game, though, things were reportedly strange.

When the game was over, the media covering the game was told that Sanders “was not expected to meet with them” after he talked with his team.

The Jackson State football team is meeting with coach Deion Sanders at a location on campus, and Sanders is not expected to meet with the media after the SWAC title game, @WiltonReports reports from a bizarre scene in Jackson.

We have been told Jackson State has gone to campus for a team meeting and @deionsanders will not be coming to the post-game presser.

What does all that mean? In theory, there are multiple possibilities here.

The overwhelming conclusion among college football fans, though, is that Sanders is getting ready to head to Boulder.

Deion to #CUBuffs is as concrete as it gets! Done deal! #NetJets flight from Jackson to Boulder right after the Jackson State game tomorrow. #GoBuffs @SportsAviation #CoachPrime @byesline pic.twitter.com/W8BdSwAk4q

He's going to be a nightmare for the Colorado SID staff https://t.co/jcUYtw5wV9

Not meeting with the media is unusual, particularly after a conference championship victory. But in reality, it’s hard to criticize Sanders too much for that.

Everyone knows what’s going on. That includes Jackson State’s players. While Sanders probably wanted to keep the focus of his team on Saturday’s game during the week, that’s now over. It’s only fair that he’d address that likely decision with them. And that is more important than a press conference, which would likely feature questions about his pending departure — and little else.

The rumor mill has been hot recently. Sanders confirmed an offer from Colorado and we even heard reports about what the offer would be. We also heard of strong interest from Cincinnati. Navigating through those rumors, which had obvious truth to them, could not have been easy for Sanders or his team. Regardless of what one thinks of Sanders heading to the Buffaloes, Jackson State winning on Saturday is a testament to the focus of the team and its coach.