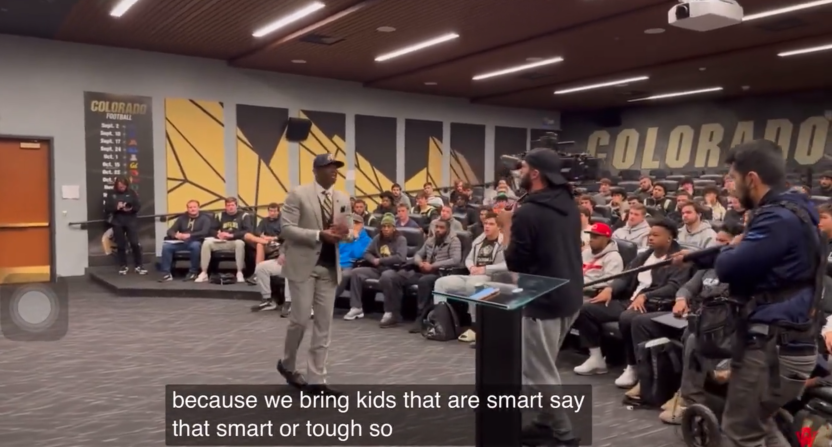 The Colorado Buffaloes have mostly had a losing culture in recent years. They’ve had only two winning seasons since joining the Pac-12 in 2013. New head coach Deion Sanders plans to change that in a big way moving forward.

Sanders confirmed all the speculation that he would become Colorado’s new head coach on Saturday after Jackson State’s SWAC Championship victory.

One of his first actions as the Buffaloes’ new head coach was to meet his players on Sunday, offering them a blunt message about how he plans to change the culture of the program moving forward.

“We got a few positions taken care of because I’m bringing my luggage with me, and it’s Louis,” said Sanders. “It ain’t gone be no more of a mess that these wonderful fans, the student body, and some of your parents have put up with for probably two decades.

“I’m coming, and when I get here it’s gonna be changed. So I want y’all to get ready. Go ahead and jump in that (transfer) portal and do whatever you’re gonna get. Because the more of you jump in, the more room you make. We bring kids that are smart and tough.”

Deion Sanders telling the CU Buffs football team that he’s bringing his own luggage, and that they better hit the portal. This is crazy 🤯 pic.twitter.com/004LUKiTr2

It certainly seems very clear that Sanders appears to be taking his new role very seriously, but some think that this speech may have been a bit extreme.

lol Deion telling the Colorado kids to hit the portal… and then getting them to chant along as he describes the players he’s bringing in to replace them wow 💀💀pic.twitter.com/y05qDfPUvF

Safe to say Coach Prime is not about coddling and constructive feedback https://t.co/xR6K83Hycu

Oh my god. This clip of Deion telling the Colorado players to hit the portal is UNREAL.

“I’m bringing my own luggage. And it’s Louis.”

What a move. Don't hate it, but pretty aggressive. https://t.co/1v2eFf2oNP

The funny part is…..you think coaches aren't going to use this AGAINST Prime?

Like at the BARE MINIMUM, this shouldn't have been put on camera. https://t.co/XKu9vP1z9S

Well he was honest https://t.co/gmIjlyvGTu

Sanders made it very clear in this video that he is going to do things his way at Colorado, and he seemingly plans to bring in his own guys.

Truthfully this is likely how most coaches think entering a new position, but it is particularly wild to see Sanders outright tell this to his players just a day after taking the job.