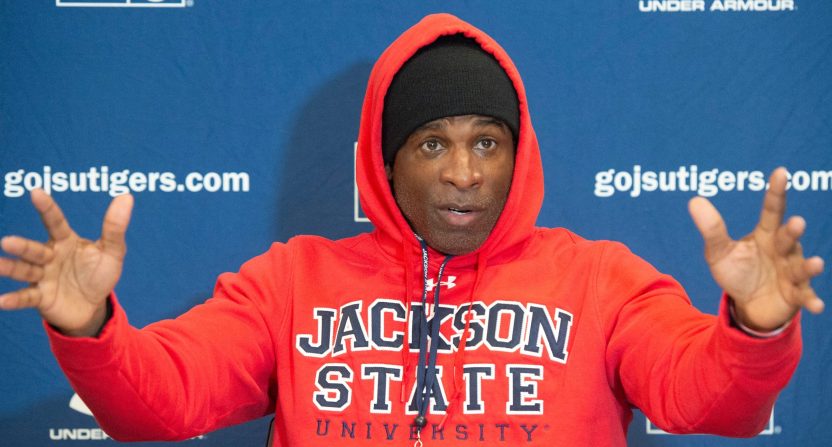 The Jackson State Tigers took on the Southern Jaguars in the SWAC Championship on Saturday in what appears to be head coach Deion Sanders’ final game with Jackson State.

Reports emerged on Friday that while it has not been made official, Sanders is expected to become the next head coach of the Colorado Buffaloes after the SWAC Championship Game between Jackson State and Southern.

That led to a hilarious moment involving the Southern band announcer during halftime of Saturday’s game.

There wasn’t much to cheer about on the field for Southern fans, with Jackson State holding a convincing 33-10 lead at the half. But the Southern band announcer proceeded to make a dig about Sanders’ likely departure for Colorado.

“Two-four-six-eight. Let’s get country like Jackson State!” said the announcer on the mic. “Hey Jackson, it sounds like you have to get ready to find a new head coach. How come your coach don’t want you no more? I told y’all he wasn’t SWAC. Coach Prime is about to be big balling.”

Southern's band announcer chose violence at SWAC Halftime today. Deion news had JUST broke and buddy had that in the clip ready to go. 🤣🤣🤣🤣 pic.twitter.com/J8wt6lOdd5

This video has certainly caused a ton of laughs around the college football world on social media.

People don't understand the importance of a band announcer at HBCU games. If they're good, like this, it's awesome. https://t.co/3hkCoGAf86

While this may have been a good dig from Southern, Jackson State ultimately got the last laugh in the game, securing a SWAC Championship with a 43-24 victory and completing their undefeated season.

While this was a magical season for Jackson State, it certainly seems like they will have a tough road ahead likely without Deion Sanders at the helm next year.