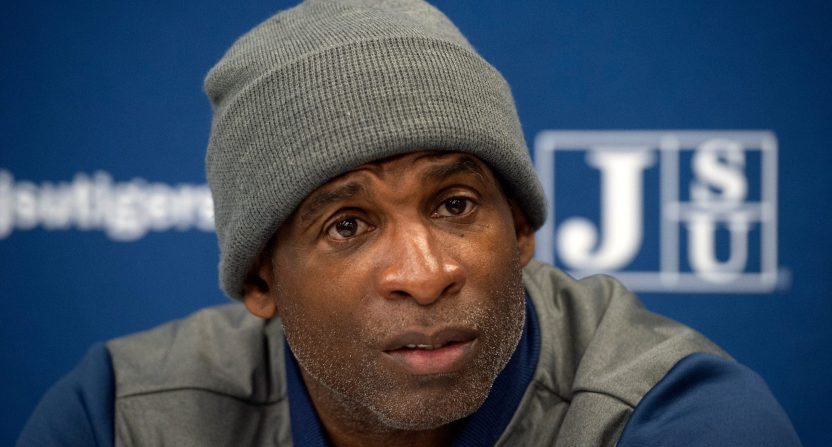 One of the hottest prospects in the college football coaching world is Deion Sanders, who has turned Jackson State into one of the top FCS programs in the nation. However, while his name has come up for some of the biggest FBS job openings in the country, there might be an obstacle to being able to hire him at that level.

According to Action Network’s Brett McMurphy, sources have told him that there are concerns surrounding Sanders and how things played out with his failed Prime Prep Academy.

One potential obstacle for Deion Sanders being hired at FBS level, sources told @ActionNetworkHQ, is the multiple academic & financial issues that surrounded Sanders’ failed “Prime Prep Academy.” “It is in the front of every presidents’ mind,” source said

“It is in the front of every president’s mind,” a source told McMurphy.

Before he found success with Jackson State, Sanders started Prime Time Prep, a collection of charter schools, in 2012. It initially served as the focus of a reality TV show about Sanders. However, the school closed in 2015 due to financial insolvency. The academy also ran into myriad problems around its football program, and there were accusations of fraud, racism, and influence peddling. The academy and its nonprofit sponsor were also involved in a federal lawsuit alleging wrongdoing in the National School Lunch Program. Many former students also spoke out about the way they were treated by Sanders and the school.

The Texas Education Agency oversees the school and an agency official noted in 2015 that Prime Prep’s finances were among the worst he had seen at a charter school.

On one hand, it’s definitely worth considering that things went so poorly at Prime Prep and that there were so many allegations of fraud and illegal activity. On the other hand, college football is also the sport where Bobby Petrino, Hugh Freeze, and Steve Sarkisian got second chances and Art Briles continues to get potential new opportunities every few years.

I think it's fair to bring this up if you're interviewing Prime and fair to use it as a piece of an evaluation.

I think the counter to it would be, nobody is asking Deion to run the school. Just the football team.

Interesting to see how it plays out. https://t.co/vXfq2vqBXL

Deion's transgressions are not as bad as say, drinking on the job like Sark, trying to solicit prostitutes like Freeze, or sending a student to film practice in poor conditions that resulted in their death like Kelly. No school serious about football cares. Move around. https://t.co/uZORZFu0eT

Yes, this seems potentially significant to the parts of a campus that care about academics. I don't know if it's a deal breaker, but it's something that would be (and should be) discussed https://t.co/5RSsxhQEl6

Coach Prime is being hired to be a football coach, not a Dean of Academics. This shouldn't be an "obstacle." https://t.co/EjyGwJtCQ1

Brett is getting murdered for this report, but the Prime Academy story is a legitimate and under-reported issue which affected dozens, if not hundreds of people. https://t.co/RPRELaqMQf