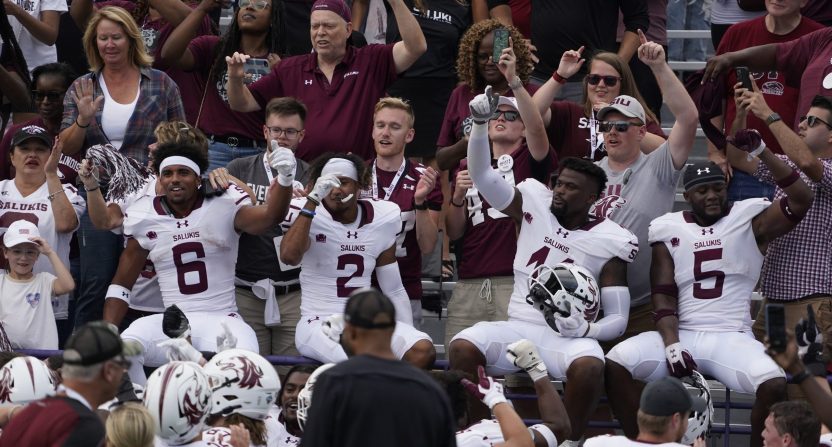 The Big Ten had a pretty rough start to Saturday. Nebraska got demolished by Oklahoma. Purdue lost a heart-breaker at Syracuse. Indiana needed overtime to defeat Western Kentucky at home. And then there was Northwestern, who lost at home to the Southern Illinois Salukis, an FCS program.

Nic Baker’s second touchdown pass to Jacob Garret ended up putting SIU ahead with 12:28 left in the fourth quarter and the Salukis never looked back. It was only their second win over a Big Ten school ever, the other being against Indiana in 2006 back when current coach Nick Hill was the team’s quarterback.

The win is all the more wild considering SIU came into the game having lost 64-29 to Incarnate Word and 34-31 to SE Missouri State to start the season.

For Northwestern, it’s a depressing turn on what started as a decent-looking season following their win over Nebraska in Ireland. However, since returning to the states, they’ve lost to Duke and now the FCS Salukis.

Naturally, the college football world had a field day with the Wildcats while also celebrating the Southern Illinois victory.

THE SALUKIS HAVE DONE IT!!! THEY UPSET NORTHWESTERN 31-24!!! CONGRATS SOUTHERN ILLINOIS!!! pic.twitter.com/9YARRPpwu5

Have to unfortunately self report.

Is Southern Illinois the best team in the Big Ten West? https://t.co/VHX73Y8TL6

Forget Oregon. It's time to add Southern Illinois to the Big Ten

Thoughts and prayers to Northwestern alum (who do not have a accredited journalism program) who had to watch there loss to Southern Illinois whilst Syracuse beat purdue. Sad day in Americas press boxes

Northwestern is 0-2 in America.

The Wildcats will look to rebound next Saturday when they host Miami-Ohio in their final non-conference game before the Big Ten road kicks in.