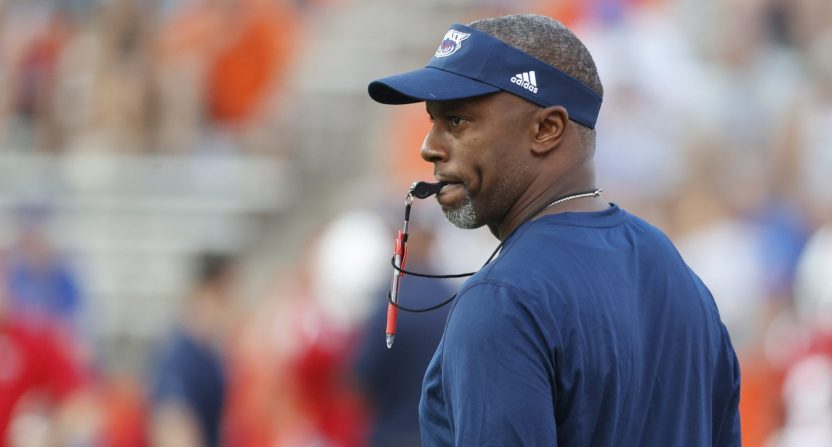 The Florida Atlantic Owls came into Saturday’s game against the Western Kentucky Hilltoppers looking to finish the regular season at 6-6, which would be the first non-losing season for FAU since 2019. The Owls ultimately came up short, and a big decision was made after the game regarding head coach Willie Taggart.

According to Andrew Ivins of 247 Sports, Taggart was relieved of his duties at FAU following Saturday’s overtime loss.

Willie Taggart is out at FAU sources tell @247Sports. Owls lost in overtime to WKU on Saturday. They dropped 4 games by a combined 9 points this season. Taggart … 1-10 in contests played after November 1st since taking over in Boca.

A big issue for FAU under Taggart has undoubtedly been winning close games this year. Losses to Ohio, Purdue, UTEP and Western Kentucky were by a combined nine points and none was by more than three.

It appears that this latest close loss was the final straw for Taggart with the program.

Many took the chance to take to social media to reveal their thoughts on the decision by FAU to fire Taggart.

Willie Taggart was always a really good dude, open and willing to talk a lot. Genuinely good person and can recruit. Hope he does well wherever he goes next.

Can’t lose that many close games or on the road as FAU has. Simple.

So Willie Taggart fired the same day Oregon loses? Duck coaches past and present having a rough go of it today… #CFB

Officially official. Willie Taggart has been fired for the second time in about 36 months. https://t.co/MTWRm6XIsF

Taggart is most well known for his coaching stint at Oregon and Florida State, both ending abruptly with limited success while at the schools. He went 7-5 in one season at Oregon in 2017 and 5-7 and 4-5 over the 2018 and 2019 seasons at Florida State.

With the latest firing of Taggart, there are now officially nine openings across college football. And while one of those is likely to be filled shortly, the number will still likely grow as we get closer to the offseason.

With Willie Taggart's firing at FAU, there are now 9 official openings:

This isn’t exactly the most shocking news when you consider the team’s success under Willie Taggart during his three-year coaching tenure at FAU.

His final record at the program was just 15-18 across three seasons. With this limited success, it certainly seems like the right time for both sides to go their separate ways.